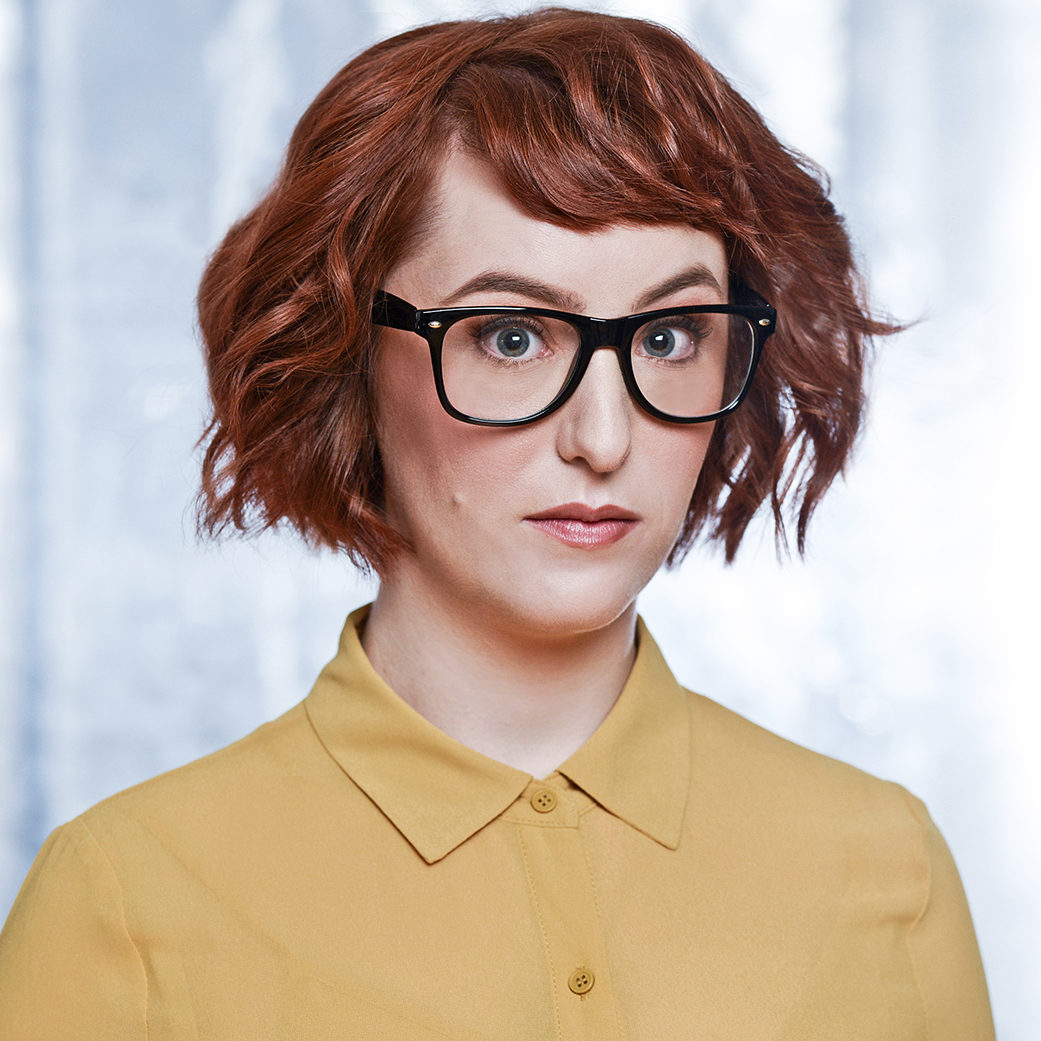 Clare Blackwood earned rave reviews at both the Toronto and Hamilton Fringe Festivals in 2018 for her Outstanding Solo Performance-nominated turn in Natalie Frijia’s BikeFace, a one woman show about the playwright’s cross-country cycling adventures; her cyclist was chipper, dauntless, and indefatigable. Blackwood was a previous Nominee Interviewee with comedy partner Ryan Hughes for their 2017 Fringe show Welcome To The Bunker, a sprightly zombie apocalypse recruiting presentation; the two continue to write and record as sketch duo Whisky Kids. She’s very much focused on comedy in the past year, graduating from the Second City’s Conservatory (her class’ revue, Fake News ‘Til You Make It, has recieved multiple remounts), and becoming a regular contributor to The Beaverton‘s website.

What have you been up to since the last Nominee Interview Series?
I’m very lucky to say, so much! I’ve completed the Second City Conservatory, started writing/directing/acting in short films and sketch comedy with my wonderful comedy partner-in-crime Ryan Hughes, began actually getting paid to write ridiculous comedic things (I’m still a bit shocked), and shifted my artistic focus pretty much entirely onto comedy, which I think we can all agree is an incredibly responsible and fiscally stable life plan.

How did you get involved with BikeFace?
I got a call from my dear friend Rebecca Kingsmill, who was the producer of the show, and an email from Natalie Frijia, the playwright, asking if I would be interested in performing a script about a real-life badass solo lady-venture across Canada. I was immediately like “Ugh gross no”, and hung up the phone. Jokes, I basically told them “YES PLEASE DEAR JESUS I NEED THIS” without even reading the script, and feverishly messaged them both a million times until they mutually agreed I would be the perfect fit. This was the right show with the right people at the exact right time for me. I remain so very grateful for it.

BikeFace was your first solo show as a performer where you portrayed multiple characters on stage. Did the experience make you more or less inclined to go for roles like that in the future?
Oh boy, what a gift this show was. It was by far the most exciting, intimidating, and challenging thing I have ever done, and has absolutely informed so many comedic and acting choices I’ve made since the run. I’ve always been one to come up with ludicrous characters, so this show for me was a constant exercise in specificity and freedom. I would do something like it again in a heartbeat.

After being the sole onstage voice of a narrative, was there anything you learned from the experience that you think you might apply to any future performances?
Oh boy, what a delicious question to ponder. I learned a hell of a lot from this show. I learned the value of recognizing the push and pull you can share with an audience in terms of flow; how vital it is to maintain the same level of energy for 6 people or 100 people; how sometimes all it takes is a pause and a look to bring the house down, and the trick is knowing exactly where that moment is on any particular night; and the knowledge that if you have a well-written script, the work is already mostly done for you- you just have to stand and deliver and mean it. I also received a wonderful tidbit of knowledge from a former teacher, the miraculous Teodoro Dragonieri, about character creation, which I will carry with me forever and use for every future role I ever have. Oh, and the art of just going for it and committing. Commit, commit, commit, because there’s nothing to hide behind, and all eyes are on you.

BikeFace examined the pushback against women taking part in solo cross-country trekking, and solo adventuring in general. Are you a cyclist? Or is there something else in your life that you feel as strongly about staking out as an equal-opportunity pastime?
Rebecca (my glorious producer) made me swear to hide the fact that I am not really a cyclist during the run of the show, but there you go, folks- I couldn’t bike across Canada if you paid me AND sent, like, a wolf or two to run after me for motivation. However, I AM an avid solo backpacker and camper and am very passionate about inspiring other women to explore those things. After one too many “Aren’t you scared to travel alone without a manly man made of muscles and studliness?” comments, I started a comedic travel blog (www.clareiswanderlost.com, oh yeah I’m STRAIGHT PIMPIN’ THIS) meant to demystify the whole solo experience and make people laugh at the same time. I figure, if I can hike up a mountain and sleep under a boulder with almost no experience in either of those things, the least I can do is let other women know they can do it as well, because naturally that’s something everyone would like to do. No? Ah.

Much of the work you’ve produced (Welcome To The Bunker at the 2017 Fringe Festival, 2018’s short film LARPD) is decidedly geeky. Can you tell us a bit about your influences, and why you gravitate to that work?
Geeky? Me? How dare you! Honestly, I’m a nerd to the bone. Always have been, always will be (you can ask my cat, Gandalf)- and in general, art tells you to write and create using what you know. I just happen to know a lot about D&D and LARPing and zombies. I love it all unabashedly, and it occupies the majority of my free social time, so why not make work that is inspired by it? It’s just pure fun for me. I enjoy the challenge that comes with creating work that is based on such niche material and making it accessible and entertaining to the general public. In terms of influences, I would be lying to you if I didn’t say I want to be the Canadian Felicia Day. She’s always, always been one of my biggest life inspirations in terms of career decisions and making work inspired by what you love. She replied to me once on Twitter and I cried in the bar washroom, so it’s safe to say I would be super chill about ever meeting her some day.

Since BikeFace, you’ve appeared in a Second City graduate show that’s received multiple remounts, and begun contributing regularly as a writer to The Beaverton’s website. Where do you see your career going forward – is it going to be more comedy-focused? (much of your past stage work has been darker, or classical.)
Absolutely. To be honest, in the last few years I found myself a bit frustrated with the way my theatrical career was progressing. With that in mind, I made a conscious decision just over a year ago to try improv and sketch, things I’d wanted to try forever, but felt reasonably intimidated by. Needless to say I fell in love with it all. I’m definitely going to keep writing- it’s always been a love of mine and I feel very at home with satire and comedy, probably because despite my sunny demeanour I’m a super duper cynical person (I blame my years in the restaurant industry). Right now I’m lucky to be working with a lot of fantastic comedic performers and actors developing scripts and sketches and everything else funny under the sun. I love the freedom to constantly create that sketch comedy offers. I’m not waiting around hoping for a next theatre gig- I’m actively writing and performing whatever my fucked up sense of humour will provide me with. That’s never to say I won’t be going back to my Shakespearean roots– I do love me a good ol’ dramatic soliloquy- but I think I’ve found a good home for now.

What are you working on now/next?
Right now I am diving headfirst into the glorious world of sketch comedy, and probably getting far too involved in far too many things, as is my usual method. Ryan and I are filming another short at the end of this month, and taking our sketch duo, Whisky Kids, wherever we are allowed to perform (hire us! We’re hilarious!). I’ve most recently joined a monthly sketch show called The WOW! with a bunch of super talented folks, so keep an eye out for that. I am also continuing to write for The Beaverton, as they kindly allow me to make fun of things like bros and Margaret Atwood. What more could a girl ask for? Basically, this next year is about throwing myself into comedy land and seeing where that takes me! I am very excited.

Do you have anything you’d like to add?
I am just so chuffed to be amongst such wonderful company in this category. Thank you for such delightful and thoughtful questions! Also, I’m so glad you all now know how terrible I am at biking; what a weight off my chest to no longer be living a lie.