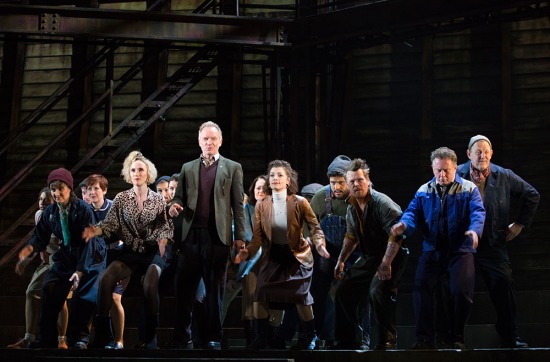 Sting’s Last Ship at the Princess of Wales

From success in the UK to sinking on Broadway, The Last Ship has enjoyed a mixed reception around the world. Though not always plain sailing, Sting’s musical has launched successfully at its new home in Toronto. Director/book writer Lorne Campbell’s revamped production is by no means perfect, but boasts a number of strong performances and moments which add up to an enjoyable show.

Inevitably, much of the audience’s focus was on one man. Sting’s iconic voice hasn’t lost its mesmeric quality, and he has cast himself well as the wise old shipyard foreman Jackie White. Those rushing to see the production to see the great rock star in action won’t be disappointed, and will likely forgive his sometimes unclear enunciation and occasionally underwhelming acting.

Set in a shipyard in the 1980s in Wallsend, a town near Newcastle, The Last Ship consists of two major plotlines. The central story follows the shipyard workers, whose company announces that they haven’t found a buyer for the nearly-finished – and their last – ship ‘Utopia’ and will dismantle it for scrap, as mines and shipyards close around them under Margaret Thatcher’s government. A romance is interwoven through this industrial struggle, as Gideon Fletcher (Oliver Savile) – who left his town for the navy 17 years earlier – returns to his community to come back for his first love Meg Dawson (Frances McNamee), and realizes how much things have changed.

Savile’s beautiful tenor voice shone through as the romantic lead, and his opposite McNamee had an infectious, sassy character as the landlady and single parent. There were a number of other notable performances, especially from workers in the shipyard, including the inner turmoil of the alcoholic worker Davey Harrison (Kevin Wathen), and the impassioned union rep Billy Thompson, played by Joe Caffrey.

The biggest highlight, however, didn’t come from an actor but the set. Designed by 59 Productions, a relatively simple structure of scaffolding and screens was brought to life with projections of various places – transforming you all around the industrial town, to the waterfront and to the shipyard. It is perhaps the most innovative and refreshing set I’ve ever seen in theatre, and genuinely makes the show.

The music, meanwhile, is energetic and folky with a number of impressive harmonies. As a result, there are some powerful moments, in the chorus numbers in particular, but a number of the songs are unmemorable, and some of the lyrics are surprisingly unimaginative. The same can be said for the plot, which was at points sensitively crafted, and at other times stuttered along somewhat awkwardly.

The most heart-wrenching aspects of the play don’t come from the plight of the workers, nor the romantic plotline, but the struggle of leaving the community and parents’ expectations to pursue your own path – embodied in Gideon’s story. Sting left the north east himself at 18 to pursue a wildly successful career in music, and his deeply conflicted feelings shine through in a few incredibly moving scenes. The proud shipbuilders are desperate to pass on their trade to children with different ambitions.

The Last Ship makes no bones about being overtly political, including a visit from a Baroness from the government – a doppelganger of the prime minister Margaret Thatcher. With little doubt as to the political stance, the play’s message is sure to resonate with some more than others, but it narrowly avoids crossing the line of being too preachy.

For a production so deeply-ingrained in British political culture, it will be fascinating to see what Canadians make of it [editor’s note: our reviewer is a Brit living in Canada]. Judging by their reactions last night, The Last Ship has found a welcoming new harbour.