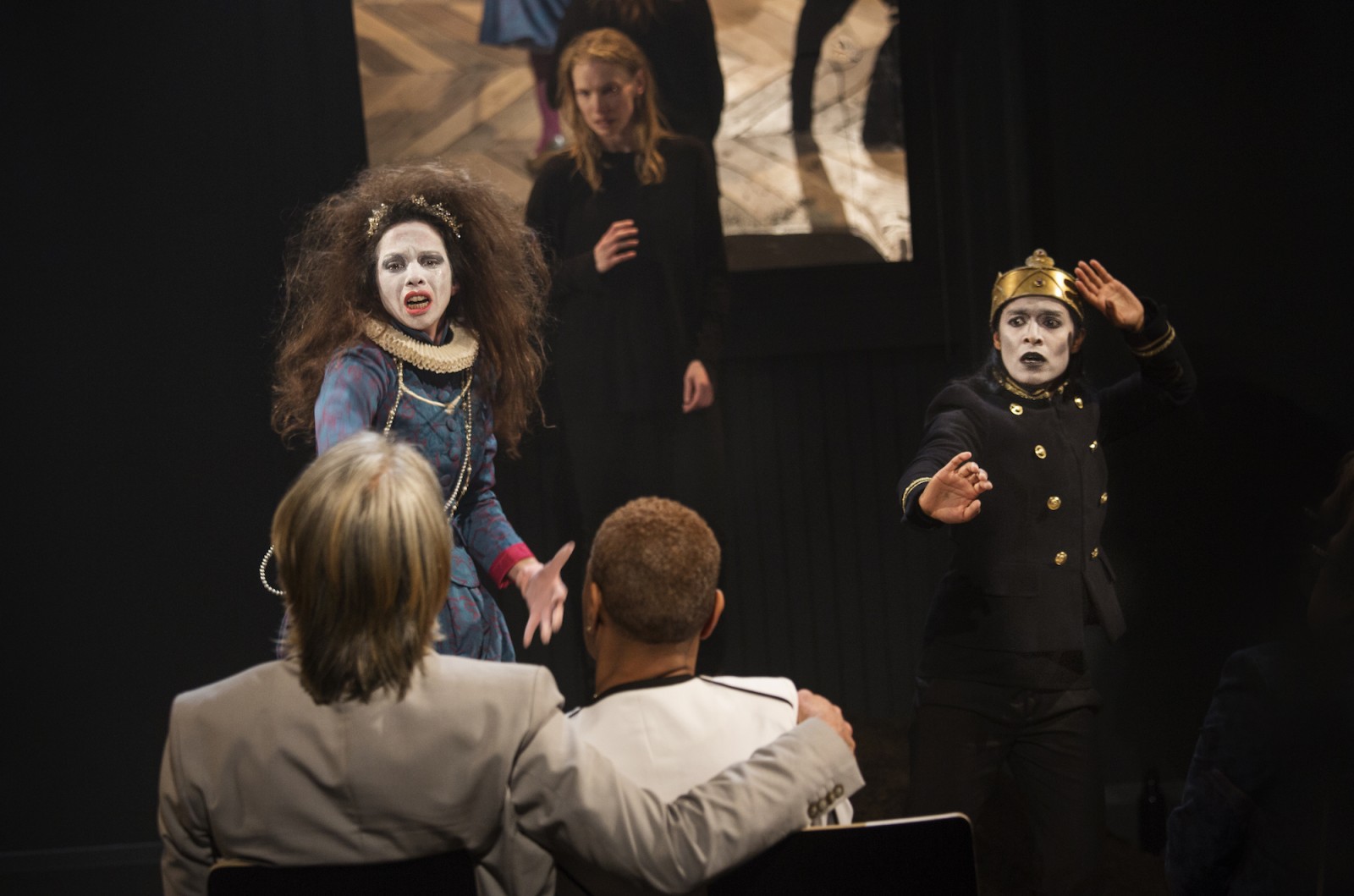 What does it mean for a performer to take on a role? Prince Hamlet, Ravi Jain’s radical reframing of the Shakespeare classic remounted here by Canadian Stage and Why Not Theatre, juggles contradictory answers to that question. Jain describes his mission as “challeng[ing] what stories are being told and who gets to tell them”, which he does here with mixed success. If nothing else Jain certainly ensures there is a story to tell about his production, a blessing for reviewers and their editors scrambling to find something new to say about Hamlet.

Despite the name – and the twist Jain puts on that titular role – the star of Prince Hamlet is Dawn Jani Birley’s Horatio. If you somehow arrive at the Berkeley Street Theatre expecting to see a by-the-book Hamlet, the game is up as soon as the lights go down: the two ends of the play wrap around as Birley takes the stage at a dying Hamlet’s urging to mention, in ASL, the “carnal, bloody and unnatural acts” that she will recount through signing over the next few hours. As the rest of the cast passes through the stage or gets shipped off to England, Birley is the one constant. Unlike some shows where interpreters are relegated to a darkened corner, forcing deaf viewers to divide their focus, Birley is always a center of attention – if not always center stage, as she moves around the soiled scenery with an expressive physicality. It’s the most effective demonstration of the power of physical theatre that any director or drama teacher could ask for, conveying the comedy or tragedy of various scenes – notably her impression of Ophelia drowning or marionette routine with a crazed Hamlet – with a force that even Shakespearean dialogue couldn’t muster.

This has wider ramifications for the show. Hamlet’s no-longer-back-and-forth with a silent Horatio is an exclamation point to the young king’s disintegration as his friend joins the chorus of voices, of sorts, inside his head. Horatio’s content is chopped and changed while everyone else’s requires thoughtful staging to allow Birley to work her magic. It’s fun to consider which other roles could be overhauled in this way – a silent Hamlet would collapse the play, a tertiary character could slip into the role without the sacrifices that make this experiment so bold.

Jain asks a lot of a work that is famously daunting and inflexible and asks the audience to consider what it means to engage with a work (and, for most, their ability to take that for granted). Sometimes this approach asks the wrong audience – newcomers to Hamlet have the hardest time filling the silence, while more experienced Shakespeare buffs know what’s being left unsaid to them – but it gets the answers, or at least the discussion, it hopes for.

If Hamlet feels like an afterthought thus far, it’s not because there’s nothing to remark on. Prince Hamlet examines the nature of performance in other ways, most notably by casting without regard to gender. One expects a male Ophelia or female Polonius to raise an eyebrow, but one expects the choice of Christine Horne as Hamlet to raise more. The name of Jain’s company suggests an obvious question: why not a female Hamlet? Sometimes there is a Why: changing an aspect of a character, and embodying that in the choice of actor, adds an interesting element to the work. Sometimes Jain’s outlook offers a Why Not, as any director who reskins Othello quickly learns. In this case, Jain can ask Why Not because there are no follow-up questions. There is not a female Hamlet, but rather a female actor playing the role of Hamlet. Nothing about the role of Hamlet (or Polonius, or…) is essentially gendered in a difficult way. No new perspective is introduced into the work; the same story is being told, just by someone else. That’s fine – why not, then? – but prevents it from being the brave new step Jain hails it as.

If Horne’s performance isn’t categorically new, it is still convincing; she brings a fun aesthetic to the role, and blends the manic and comic seamlessly. The rest of the cast does good work across the board; in a lineup designed to subvert expectations, Rick Roberts stands out as a wonderfully stereotypical and sleazy Claudius.

Prince Hamlet is groundbreaking in at least one way, and that’s enough to earn your consideration. If you don’t know your Hamlet from your Henry IV this may not be for you but, if you know what you’re getting yourself into (or thought you did), it’s well worth your time.