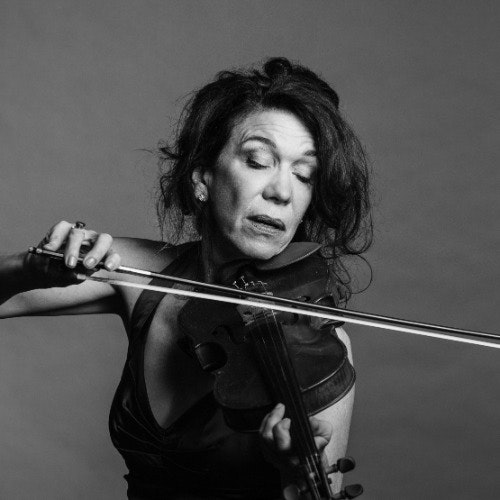 Dinner with The Duchess

Meet Margaret (Allegra Fulton), a celebrated female violinist, who is retiring after decades of an illustrious career. She is being interviewed in her home by young prodigy journalist, Helen (Rosie Simon), who is intent on asking hard, smart questions. We soon learn of the violinist’s mean-spirit nickname within the industry, “the Duchess,” a title that echoes her position in her marriage to David (David Jansen), a beta male (and possible gold digger) with a wandering eye. As the interview begins, we discover that not everything is as it seems—is it the marriage that is unhappy? Why can’t Margaret stand the sound of her own voice? And why, when she seems so eager for the interview, is she incapable of answering the very first question, “why do they call you the Duchess”. These are the questions that drive the narrative in the first half of the show. The duchess herself, played by the enigmatic, and effortless funny Allegra Fulton, is the highlight of this show. Character and actor alike are well defined and charming: we like the duchess right away, and continue to like her, even when we are told we shouldn’t. She is well supported by David Jansen and Rosie Simon, both excellent performers.

Where the play confused me was in the story itself. The beginning of the play has a levity and energy that is funny, charming and engaging. However, the final reveal of the show seems to come out of nowhere. The play seems to breaks its own internal logic, which it is allowed to do, but confused me nonetheless. Long monologues are part lecture/part storytelling which, while enjoyable, seem tonally at odds with the screwball comedy banter that begins the show. An aside about women in classical music offers perhaps a sly feminist message- “we can either be total bitches or total weaklings,” scoff the Duchess- and yet, the Duchess herself never escapes this reductive, unimaginative, and completely overdone binary. Again, something interesting occurred in a striking moment near the end, where we find the of the Duchess alone in her apartment for the first time. Fulton is stunning in this intimate bit of theatre but the delicacy of this moment—and the character’s beautiful intimacy— is then completely quashed by another five or so minutes of monologues, and a saccharine and predictable ending that left me rolling my eyes.

While the talent of the performers and creative team cannot be denied, Dinner With the Duchess feels unfinished as if it’s multiple plays squished together but never fully realized: a dash of Sunset Boulevard meets the genealogy of female classical violinists meets a something that might be either Frost/Nixon or Interview with a Vampire. In touching on all those things, it is none of them. Ultimately, Dinner With The Duchess awakened my taste buds but didn’t satiate, leaving me hungrier than when I walked in.

Anatomy of A Dancer

Anatomy of A Dancer offers a song and dance tribute to the life of Gene Kelly, the man of song and dance himself. But, considering their acclaimed run during the Toronto Fringe, it seems as though the performers are rusty after a few months away: technically and dramaturgically, Anatomy of a Dancer lacked the polish of a fringe show ready for the “next stage”.

The dancing and singing itself—with the occasional opening-night flubs aside—is very strong. No one can deny the burgeoning skill of the cast involved. Micah Enzlinand and Luke Opdahl are particularly good at bringing the movement together with the character of Gene Kelly, and Robbie Fenton proves a triple threat with a voice to match. The female dancers take a supporting role to the story of Gene Kelly— even his second wife, while dying, was more interested in ol’ Kelly’s career. Nevertheless, they persisted. Though, let down by spotty tech and a confusing story, they never quite succeeded in winning over the low-energy audience.

Ultimately, it seems like someone simply read the Gene Kelly Wikipedia page and choreographed some dances around it. Strange editorializing mark one or two moments in time: a singing-in-the-rain here, a McCarthy-era there. But none of it gets into the life, difficulty, and history of Gene Kelly, and some of it is downright historically misleading. A completely confusing, seemingly out of time interview with Judy Garland mid-show—and a later dance, depicting her downfall— assured me that any attempt at ‘story’ was only window dressing for the dance.

Similarly, certain production elements distract from the work of the performers on stage. One tech mistake is easy to forgive. Even two, we might understand. However, there were enough errors with the production elements on opening night that it hindered the overall performance. I understand that there’s a lot that happens in the tech rehearsal for a show. Maybe, this was just the most unlucky show to have seen. However, not one, not two, but three dancers lost their mics while dancing, making me assume that they didn’t rehearse with them till the opening. Continuing, dancers couldn’t seem to find their light. And I’m not including a scene where very clearly the wrong lights were cued. No, I mean fully-light scenes had dancers on the side or the background, dancing in the dark. And not in a cool Springsteen way. In other scenes, the spotlight provided was not big enough to light the dancers. As such, they moved in and out of the light. Could this be intentional? If so, it seems at odds with musical comedy energy that the rest of the performance attempted to convey.

The dancing itself was great! Ballet meets Fosse along with soft shoe and tap dance. You gotta love this stuff. Who cares if the delineation between the 5 different Gene Kellys makes no dramaturgical sense; look at that soft shoe! So what if I can’t hear their lines behind the blaring of the curiously-included “Sing Sing Sing”; what a great song! Don’t like that weird melancholy ending? No worries, in moments they’ll jump to a big group dance number of “I’ve Got Rhythm”. If fun is what you’re in for, this show has it in spades. Who could ask for anything more?