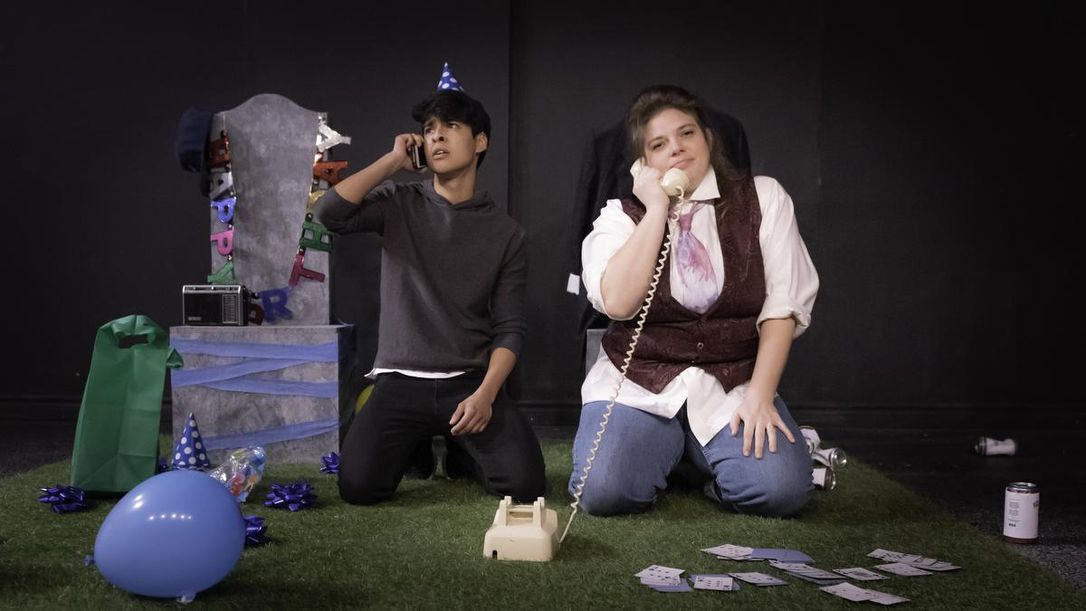 Blood Pact’s No Clowns Allowed at The Assembly

Tucked away in a tiny theatre in Parkdale, No Clowns Allowed is a success. Lighthearted in a macabre way (it definitely worked!), the show has moments of tenderness and seriousness while dealing with some difficult material. I was grateful for the thoughtful announcement before the show from the Stage Manager, informing the audience that the performance would deal with themes of death and suicide. As a premiere of the new play, written by Bri Proke and directed by Katrina Darychuk, I was happy to see a small indie show supported by the community and Blood Pact Theatre.

I loved the simplicity of the set in such an intimate space. Two unmarked gravestones sit side-by-side, giving the actors enough to work with without being distracting or pulling attention. The soundtrack to the show is wonderful as well, setting the scene with punk rock, and peppering the performance with doo-wop tunes, from the “6-6-60s” channel. I must say, as a pun-lover, I had so many good giggles throughout the show. Some creative writing and essential research had many of the audience laughing out loud at a certain song, or brand of beer. I also don’t think I’ve ever seen a montage in a stage show, let alone one that worked so well. Gotta love a good montage. Both actors owned their roles in different ways. It seemed to take a little time to warm up and settle in to their characters, but by the end of the play, they were both completely believable.

As the show progresses, we see the characters truths come to light, and delve into discussions on loneliness, love, and self-acceptance. Suicide is addressed as a sort of pain relief, and how problematic such a view can be. I was left wondering about reasons to live or die, with questions of guilt and responsibility to those we love floating in my head. Part of a successful play is to get an audience engaged, thinking, talking, about how they see themes from the stage reflected in their own lives, and No Clowns Allowed definitely does this.

Knowing that small, independent works such as No Clowns Allowed can get traction gives me confidence. Theatre can and will find a way, and the arts can still flourish in a time of budget cuts where arts funding being eliminated is just around the corner. Thanks to all involved for showing us your passion and dedication to the stage.