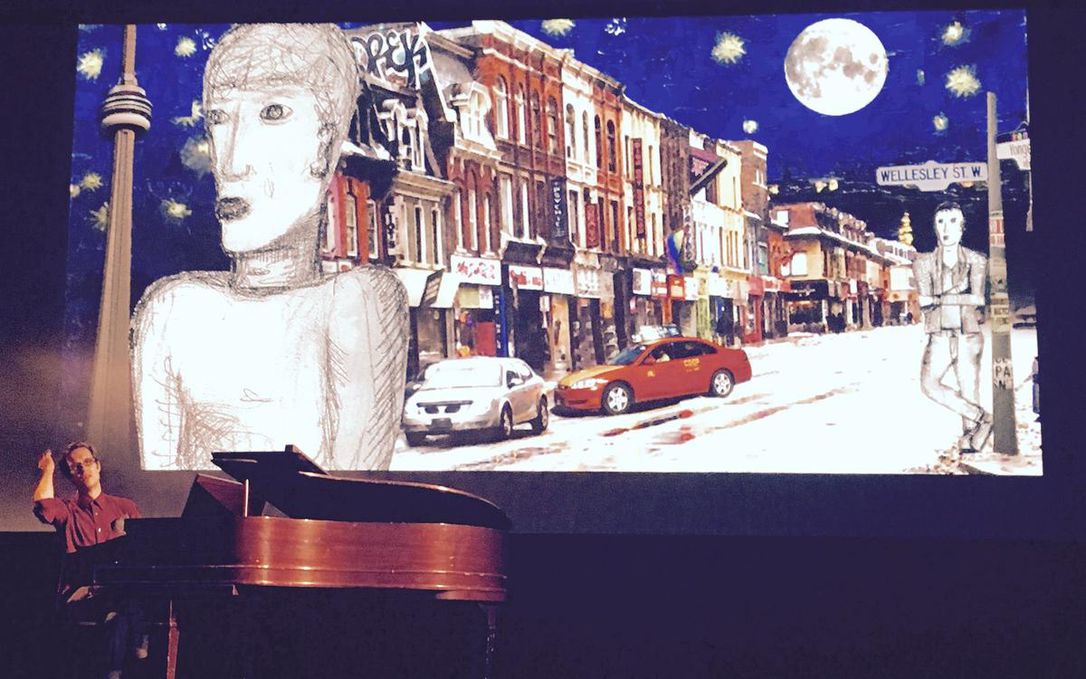 The Rendezvous with Madness Festival – known for its films – expanded this year to include visual art and performance. The mental health themes addressed in the festival are relevant in today’s world more than ever, and the programming was fittingly launched on World Mental Health Day. I had the opportunity to catch some of the staged works.

Notably, all the performances were introduced to us with an explanation of the subject matter, mention of possible triggers, and pronounced as “relaxed”: you may get up and leave at any time, come back at any time, and speak with an “active listener” outside if you so wish. Certainly, this creates a safe environment where everyone can take care of their emotional needs.

Thomas McKechnie pours his heart out in his one-man show as he discusses living with clinical depression. His story begins at the age of 19 after having received the diagnosis. In one of the most engaging scenes McKechnie make use of an entire carton of eggs, each one representing a person and their state at a party. Indeed, an egg could roll away and break. This is as spontaneous and unexpected as mental illness can be. It needn’t stop the show though. So, while funny, I found it to be very illustrative of the mind of someone with depression.

At times the lines were delivered so fast that I could not make out the words. I am not sure if this was related to nerves or the acoustics, or rather a deliberate style. Certainly, the intimacy of theatre allows us to tackle the subject matter head on as the performer himself informs us in the Q&A. Director Michael Reinhart (who won Outstanding Direction for this piece at the 2016 MyTheatre Awards) echoed these sentiments in his articulation of the creative process and how it differentiated itself here from other contexts: trust was never assumed, but rather carefully built, articulated, and evolved over time as needed.

The Red Horse is Leaving

In another powerful piece Erika Batdorf portrays her mother, celebrated painter and musician Thaya Whitten. Batdorf discusses everything from the purpose, materials, and value of art. Less conventional themes, perhaps, included the questionable need for an audience, and the intersection between music and art. Mental health is portrayed as more of an abstraction here, much less directly than in the above piece. Thaya appears to have an addiction to smoking and coffee. She trembles without one or the other. She gets lost in her thoughts for what seems like hours or days. Her alter ego is a gargoyle lurking from behind, charmingly and attentively played by Kate Gordon. Gordon wears biosensors shaped into a spine. They change colour and pulse to reflect Thaya’s state. It was simply mesmerizing to see.

Thaya’s art practice and research is known to have engaged intimately with theology and science.  When it comes to the Red Horse, biblically it has most often been seen as a symbol of war, atrocities and sin. So the The Red Horse is Leaving might be indicative of sins being washed away and the start of a period of peace. For this artist, that seems to mean having the highest “freedom” to create uncensored. There is a very strong discussion here about whether the artist must suffer for their art. Batdforf is able to profoundly capture many struggles experienced by her mother coming to terms with her role as a lecturer-creator, straddling the private-public realms. Her fury is most evident when she debates the need for private commissions. She is most vulnerable in the moments when she directly addresses the audience (as her students) looking in at a world that cannot be priced.

While the theme of music figures as important to Whitten’s biography and work, we don’t get to learn much about this aspect of her life. Instead music is treated (again abstractly) as a metaphysical experience for the senses that lifts Whitten up into the spiritual realm from which she paints.

The piece which resonated the most for me was Manitoba Music in which Jim LeFrancois along with his collaborator Rob Joy play and sing away, alongside the Bruised Years Choir. This piece was not promoted anywhere as queer content so I appreciated the surprise. I suppose this was so that the themes of mental health would not be upstaged. But that’s not the only reason I can relate. Like me, LeFrancois is a country boy who ended up living a big city life. Through his candid storytelling we learn that the sharp highs and lows turn out to be more than just an ordinary part of life. His touching prologue is tasteful and helps us fill in some of the gaps so we are able to sit back and enjoy the music.

Highlights include an ironic song about marriage equality and how that should make everyone happy. Right? Wildly colourful ballads describe life in Melita, Manitoba including curling culture and the search for black gold. In an emotional song LeFrancois might just have us all falling in love with the simplicity of prairie life – or prairie guys. LeFrancois has the harmonious demeanor of Elton John, but with the grit of Rufus Wainwright. All in all, it’s really brave storytelling and highly entertaining at the same time.

As artists we so often excuse mental health concerns as situational or circumstantial. Each and every performance piece in this festival, to some degree or another, addresses the meeting point between creativity and madness, and it is about time we start having these profound discussions. Bravo!