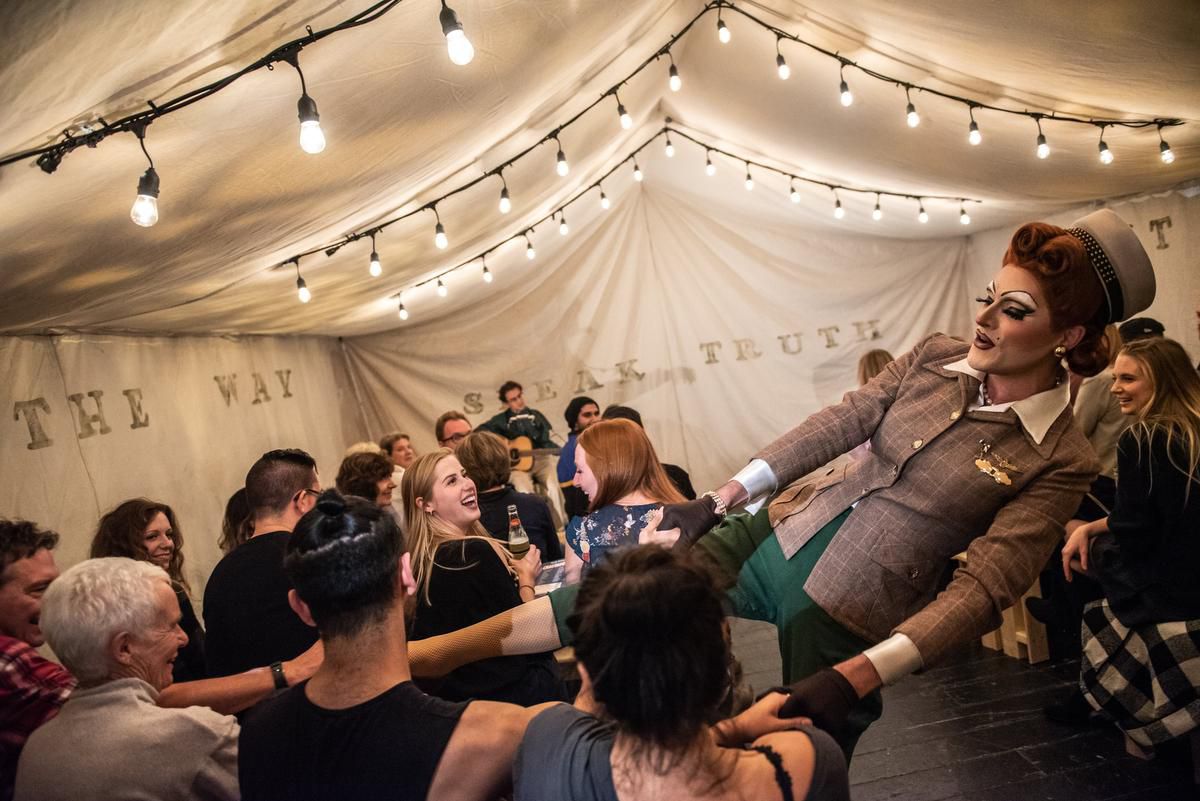 Pearle Harbour’s Chautauqua- presented at Theatre Passe Muraille, written and performed by Justin Miller in his Critics’ Pick Award-winning role- is what’s been missing in theatre. With the political climate, we are starving for a noble leader and Pearle Harbour steps up to fill that role.

The show is set in a mid-century wartime tent, similar to what you would see Marilynn Monroe in when she went overseas. And Pearle, a drag queen with stage presence that reaches farther than her long long legs, is positioned to rally the troupes with her motto of speak truth, live pure, right the wrong, follow the way. More than a rallying cry, this is a morality message which is delivered with sophistication and tongue in cheek that rings true with the audience. Despite being a theatre performance, it feels like you are being led in a cult, or preached to in organized religion, or lectured by a motivational speaker but with an underlying goodness.

This is not a performance that is about traditional narrative. It is an 80 minute monologue that artfully strings moral vignettes together. The focus is about the larger than life persona that is Pearle Harbour and each story shines light into the well-thought-out and highly constructed character. She weaves in and out of audience participation, encouraging or ridiculing depending on the moment and her temperament, which is mercurial. The authenticity of this character is so strong that where Pearle starts and Justin Miller ends is blurred.

The construction of the show has been done with an uncanny dedication to detail. There is a subtle background soundtrack of nature noises that are played, bringing your unconscious senses back to camping experiences; there is a pine smellscape; and the tent in and of itself creates a novel way to block out reality. When you enter the tent, you select a ping pong ball to indicate your seat. This is an ingenious way to divide up friends, causing people to chat with neighbours, and opens the gallery to Pearle interactions. Within the moral lessons that Pearle expounds, there is a significant amount of audience participation. One of the final scenes has Pearle directing the audience in a comedic rendition of an old parable told with puppets. When was the last time you saw a great puppet show? When was the last time you were in a great puppet show? Because Pearle Harbour’s Chautauqua has such a dependancy on audience interaction, it makes the show different every night. So, that means you should go every night. (There is no doubt in my mind that you will want to.)

The ending is the only moment where Pearle, as an icon, is diminished. How do you end with a persona that borders on mythic proportions? The end premise is that she’s run out of time to convert us into the ways of Chautaqua but the Pearle we know and love would never let external forces influence when, how long, and what she would say. Justin Miller and his team have set the bar so high with the show that this ending, which is still good, doesn’t compare to the rest of the show.

Pearle Harbour’s Chautauqua only runs until October 27th. This is a rare opportunity to see satirical, moral, and comedy rolled into one evening of bizarre and extraordinary performance. Go. Go now. Tell your friends or, better yet, tell your enemies. We need hope in our world and this is an unending source.