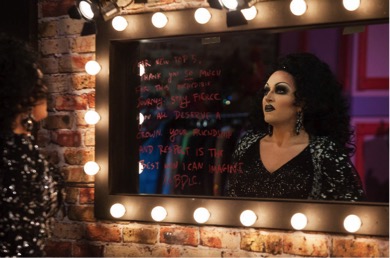 I’ll be honest: This episode made me nervous. It made me nervous for the queen sin the bottom, which was essentially a worst case scenario, but more than that, it made me nervous that in this age of VH1 and hour and a half long episodes, Drag Race has refocused into a reality show first and a competition second. This, to me, is not the essence of Drag Race. Sure, there have been iconic gagworthy moments from Untucked and some of the interpersonal drama: We got Linda Evangelista. We got “I don’t have a sugar daddy.” We got Alaska offering to paypal $10,000 to stay. These are the kinds of speeches that take us from a show about girls making clothes and lip syncing to an elevated piece of uniquely gay culture that speaks directly to, and in the language of, its viewers. Still, the core of RuPaul’s Drag Race, and what has provided us with the most lasting memories of the show, are the challenges. The looks, the songs, the performances. When I am old and gray and have long since forgotten that Kennedy had a long night of hooking, or that Milk ever existed, I will still listen to Read U Wrote U, or watch the iconic Shut Up and Drive lip sync from All Stars 2, and remember that this show was about charisma, uniqueness, nerve, and talent. The drama is just a bonus, and it should stay that way.

This week, more than any episode in history, centered drama first, and the challenge second, which I think is a mistake for this show. The episode ultimately ties up its messy loose ends with its signature wholesomeness – Dela and Morgan work it out, Milk finally stops crying and works things out with Kennedy, and they all remain sisters first and competitors second – but it takes a whole of chaos to get to that point. Drag race becomes uncomfortable when it becomes vitriolic. An essential aspect of it is its tongue-and-cheek nature. It’s why Ru is so fond of base humor like puns and innuendos – nothing is too low-brow and that keeps the show from becoming too serious. The queens know that there is a fundamental difference between an insult and a read. Reads are funny and done with love, real disrespect is incongruous with the spirit of the show. That’s why I’m so annoyed to see this damn note come back. It wasn’t nice for Thorgy to write something nasty about Shangela, and it wasn’t nice for Trixie to hang it up. Shangela still feels annoyed with Trixie about it, then Thorgy is mad at Trixie for getting her in trouble with Shangela, and the whole thing is silly and mean and there’s nothing fun about it and I hate that we’re dedicating this much time to it, particularly because it doesn’t factor at all into the story of the episode. Shangela and Trixie have each saved each other once (or at least, would have if Trixie had won the lip sync), and they have moved past their drama. Neither of them will be involved in the elimination tonight, and Thorgy will not factor at all. I hope that we are done with this stupid note forever. The most fascinating and valuable piece of all this non-competition drama for me was Chi Chi’s observation on Milk, pointing out that because of Milk’s attractiveness as a boy (he has made a career as a male model as well as a drag queen), he may be less aware of his presentation as a drag queen. He’s used to being hot and desired everywhere he goes, so maybe he assumes that it will be just as effortless for him to be admired as a woman, and therefore doesn’t put as much work into his drag persona. It’s certainly possible, and may provide an explanation for why Milk often comes off as so inaccessible and unlikable to viewers. God, I missed Chi Chi.

The only drama that really goes frustratingly unresolved is Bebe vs. Aja. Aja is annoyed with Bebe for not giving her credit for assisting her with her winning look last week, and then talking over her and not giving her a chance to plead her case to keep her last week. I want to say I’m Team Aja here, but I’m also blinded by the fact that Aja so clearly should have returned to the competition this week that I’m just going to agree with everything she says out of a sense of justice. This argument ultimately has no resolution, as Bebe will not win the lip sync so we don’t know whether or not she would have brought back Aja, and they don’t really get a cute make-up scene during mirror time. It just served to make me more righteously outraged about Aja’s treatment this season, but at least we got to see her dance again one last time on the show.

I almost forgot, totally overshadowed by all of this nonsense, there is also a maxi challenge in this episode. The five eliminated queens will face off as a team against the five remaining queens, each creating a Spice Girls inspired character to form a girl group, the Kitty Girls. They must each write and perform their own lyrics, and will be coached by Adam Lambert, which I believe I willed into existence by complaining last week that the guest judges didn’t have enough to do in these episodes. Because I still live in 2008, I am still outraged that Adam Lambert didn’t win American Idol and am happy to see him looking good here, delivering thoughtful and helpful but honest critiques of the girls.

The eliminated team performs first, and honestly no one does badly. I’m impressed particularly with Thorgy stepping it up, and Chi Chi’s singing voice is the face crack of this whole episode. She sounds so good! I’m sad that Chi Chi has no interest in returning, but I respect her decision, and her reasoning, that she doesn’t want to be the Roxxxy Andrews of All Stars 3, is easily the best line of the episode. The remaining queens also seriously came to play. Trixie is out here looking like an absolute skinny legend in her little math-themed overall dress as the nerd, and Dela really shocked me as the goth after having a rough day in the studio dealing with all the drama. Shangela looks absolutely stunning, and though she doesn’t end up in the top, it’s definitely a full rebound from last week in my eyes. Kennedy always brings it with her kicks and tricks, but honestly I barely remember who her character was and her lyrics ended up fading into the background for me. Bebe brings the comedy and the weird, and lands in the top for the second week in a row, along with the unstoppable – well, almost – Dela.

The lip sync is where things get interesting. Both queens kill it but there’s something different about Bebe. She’s not moving around much, which isn’t unlike her, but she’s not presenting her normal regality. She’s doing well, but I think if she had wanted to win this badly she could have pulled out more for the first half. There are reasons enough for Bebe to want to throw this: The decision is too hard, she doesn’t want the responsibility or the blood on her hands to chop another contestant, she doesn’t have a strong opinion about which queen should come back, etc. And then: Confirmation. There are doubters out there, but I fully believe that Bebe threw this lip sync with the knowledge of Dela’s plan. Bebe is no dummy. She hasn’t been on the Drag Race scene in a minute, but she knows Ru’s pet peeves. No queen takes off her wig without something underneath it and lives to see a victory in the lip sync. Whatever you think about it personally, Ru hates that shit. Bebe lifts off her wig and the battle is won for Dela. The queens and I await with bated breath. Dela announces that the queen she will be bringing back is Morgan McMichaels. Ultimately, this is the most generous thing she could have done for any there. Morgan came up before Twitter and stans and drag queen merch everywhere. She didn’t get a chance her first time around to really brand herself or promote her career outside the show, and then barely got a chance her second time. This probably would have been my second choice. However, from a show standpoint and from my sense of fairness, I think it should have been Aja. Clearly Aja proved herself the most by staying the competition the longest, and barely deserved to go home last week. Most of all, she was actually there the whole time and didn’t get to skip a massive portion of the competition!

Then, it’s time for the elimination. I desperately don’t want anyone to go home but with all this talk of track record, I am mentally preparing to lose Kennedy. Then, Dela announces that this is the easiest decision she’s ever made, and I know what’s coming next. All of this stress about eliminating queens and the guilt she’s carried with her couldn’t have culminated in any other ending, I see it so clearly now. This is the perfect episode for it too, because it’s intimately related to my concerns about the rest of the episode: Dela never wanted to be a reality star. She wanted to be a drag queen. And this season it became too hard to distinguish between the two. You can complain all you want about her theatrics and her melodrama, but Dela has never claimed to be anything other than a sensitive theatre kid trying to live her dream. It made her an uncompelling drag queen to me as I saw very boundary-pushing and diversity in her artistry, but it makes her damn well suited to go out in a self-sacrificing blaze of glory like this. I love this look for Dela, and I will stand by it. I am no longer nervous for Drag Race’s future as I was throughout this episode. It assures me that after all these years, the show can still truly shock me and leave my mouth hanging open staring at the TV. After a whole season of being nonplussed by her dominance, I am happy to stan, at least for this one moment, for Ben dela Creme, and this iconic television moment. We salute you, queen.