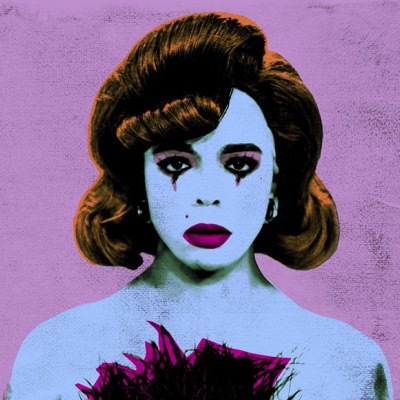 Welcome back to an episode full of firsts! Trixie’s first ever challenge win, Bebe’s first of the season, and the first time we have not all been at the mercy of Ben dela Creme, though she still found a way to make things about her, nearly weeping over the exhaustion she’s enduring from consistently being in the top so many weeks in a row.

This week was all about Andy Warhol, and as a proud Pittsburgher I could not have been more excited to see the theme be my hometown hero. The mini challenge, won by Aja, featured gorgeous Warholian portraits of each queen, and launched Aja into a whirlwind of confidence that would not end up as she hoped. This was the season’s first sewing challenge, which lends itself particularly well to the younger queens like Trixie and Aja, who have spent their entire careers making their own outfits. More classic queens, we might remember from Shangela’s first few seasons, would frequently go out on challenges like this simply because it’s not a skill they need in their every day life if they routinely have their costumes made for them. It’s important to remember that being good at Drag Race is not the same as being a good drag queen, and there’s no shame in lacking certain expertise like sewing if it doesn’t come up in your career. That said, I am so thrilled to finally see a design challenge as it reflects a completely different set of skills than the continuous improv and comedy challenges that often have little to do with how a queen actually performs at her shows. Mixing it up like this allows queens who have normally found themselves on the top to be challenged, and show us what some of the other queens have to offer when they’re in their element.

The challenge will feature two runway looks: One, a soup can that reflects who they are as a queen, and the other a Studio 54-inspired Disco look. In a beautiful homage to her previous runs on the show, Shangela unsurprisingly struggles with her fabric, shouting at her sewing machine and ultimately enlisting the help of Trixie, hopefully burying the hatchet from last week’s drama once and for all. Dela, by her own admission, is not the greatest seamstress but has won a design challenge before, so it’s no surprise she ultimately finishes safe here with her Michael’s Craft Store realness. Kennedy, as per usual, is 50 shades of over it and stays in her lane, ultimately winding up with one of the most beautiful looks I’ve ever seen on the runway. Once again, she and Ben get into a little tiff over the strategy of the game and how the girls should be eliminated, ultimately reaching no conclusion, and I’m starting to wonder if we’re going to have this fight every week until one of Ben or Kennedy eliminates the other. In that case (and most cases), #TeamKennedy.

This soup can challenge honestly did very little for me. The queens walk out in these very glam cylinders that all look very polished have funny enough voiceovers, but I honestly can’t remember anything specific about most of them. The judges really picked on Aja for not being able to brand herself, as she went with a sweet theme to represent herself when really she comes off more spicy on TV, but I didn’t take as much of an issue with it as they did. First of all, the girl is 22, her career is younger than some of these girls’ lip injections. Secondly, she suffers from the fact that her time on her season was short-lived and defined by one incredibly iconic moment, and you can’t build a brand around “you look like Linda Evangelista.” They also clock Aja for not doing her research on drag herstory when she mispronounces France Joli, which seems kind of unfair to me because obviously she knows who she is, and if that’s how people around her have pronounced it or how she’s read it that’s not really her fault. Also, if drag trivia is going to be a part of the criteria for elimination than Ru should make it a challenge, and not randomly decide it’s part of the judging process. It’s true that the queens should know where they come from, but it’s clear that Aja makes an effort and cares about her history, and that is not undermined by a simple mistake. As far as the runway look, Aja’s was by far the most beautiful. I found this to be absolutely stunning, and perhaps it’s because I’m the same age as Aja, but it did read very disco to me, particularly with the hair. I firmly believe that Aja did not deserve to be in the bottom here.

On the flip side, someone who did deserve to be in the bottom, Shangela, shows up in what Trixie observes as one of the worst things she’s ever seen on the Drag Race runway, and that is not shade, that is straight tea honey. I understand that Shangela’s design concept fell apart but this is inexcusable garbage. Though I do generally agree that track record should play a role in the eliminations, and that it would have been a huge shock to see Shangela go out here, I was honestly questioning who I was rooting for, simply because Aja has done pretty well the whole competition, and her performance here was so many miles ahead of Shangela’s. I’m happy to see Shangela continue, but if I were in Bebe’s shoes, this look may have single-handedly caused me to go a different direction with my decision.

Speaking of Bebe, she finally wins and I have to say I’m a bit surprised. I didn’t think her runway look was nearly as fabulous as Michelle seemed to, but she did look gorgeous. Personally I didn’t think it nearly stacked up to Kennedy’s green goddess elaganza, but as I’ve already proven, I’m no expert on the 70s and I supposed the judges felt Bebe was more disco. Unshockingly, Trixie joins her in the top with her incredibly, purely Trixie pink jumpsuit and blonde disco hair to the gods.

I don’t know who Trixie picked to go home, but if there ever was an instance of production rigging in a lip sync, here it was: Bebe, who was literally assigned by Ru to play Diana Ross in the divas challenge, is going to lip sync to Diana Ross, against Trixie, the country-folk singing Wisconsinite whose look is associated with many things, none of which have to do with regality. Bebe dominates and Aja is sadly sent home here, leaving as by far the most obvious choice for this Handmaid’s Tale twist to bring back if indeed that’s what is happening. Based on the ending segment, it appears that twist will finally pay off next week, with three queens in the running to return. I’m sure many people have analyzed the hands that were peeking out from those red robes, but I prefer to be surprised.

I’ll end with a stray thought: I wish that the guest judges had more to do. I’m a huge Pretty Little Liars stan and was excited to see Shay Mitchell here, and obviously I’m obsessed with Tituss Burgess. They sometimes manage to involve them, like Kristin Chenoweth showing up in the Snatch Game last week, but there really should be some sort of judge participation every week so it’s not like these big names show up and aren’t even there, which is how it felt this episode. Bring Tituss on for a singing challenge! Let Shay ask the queens about their runway looks in the workroom! It doesn’t have to be serious or influence the challenge in any way, but let them be involved! Everyone loves celebrity interaction and it feels like a lot of great faces are going to waste here. Just something to think about @ World of Wonder!