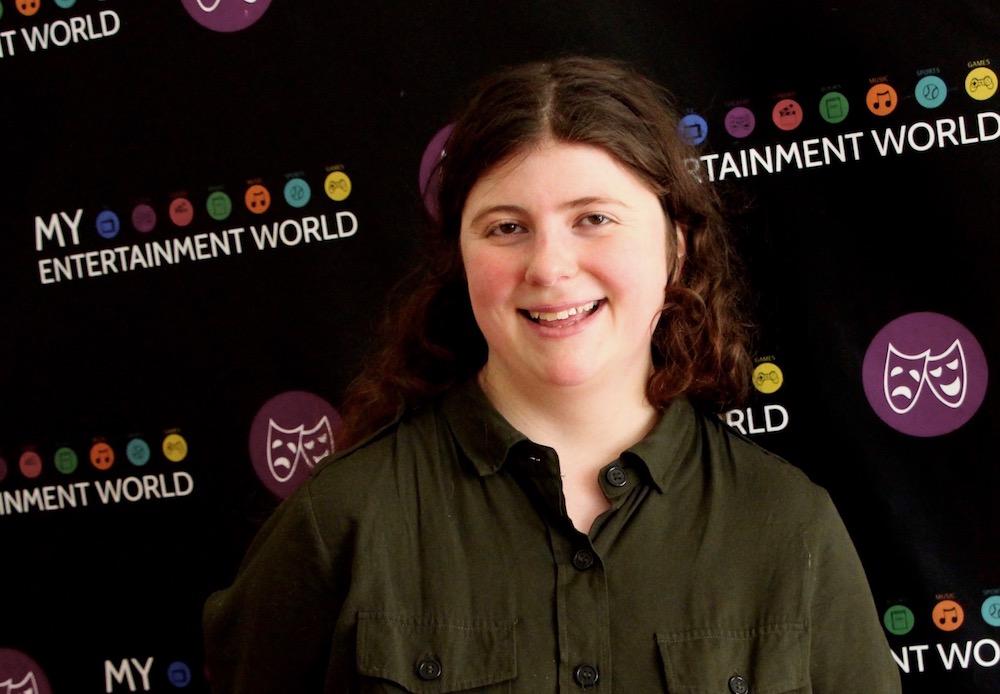 Playwright Julie Foster’s The Tenth Muse features one of the most intriguingly complex lead characters we saw all year. Telling the story of ancient Greek poet Sappho through the lens of history’s unreliability and society’s judgemental eye, Julie painted a remarkable portrait full of deeply human contradictions and complications, ending Filament Incubator’s second season on a high note and earning an Outstanding New Work nomination.

Do you remember your first theatre production you ever saw?
It was probably a musical, because I went with my family a lot to musicals when I was little. Probably The Lion King. A classic. It’s great. I loved it. It got me hooked.

What inspired you to write about Sappho?
It was actually a school project to start. I was a playwriting major at Concordia University, and our final project was to write something based in history. So it could be a person, an event, era – whatever we chose. After a lot of research, I narrowed it down to Sappho. She seemed like a badass that I wanted to write about.

What made you want to go into playwriting?
I was in an arts programme in high school, which was mostly acting-based, as most drama high school programs are. Halfway through that programme, I got more into writing just for fun, outside of school. And we had some student-run festivals at the school that I got involved in writing [for]. So I shifted my focus to writing, and to more backstage, as opposed to acting. I don’t know if something about reading a lot of plays got me into writing them.

Are you one of the kids who got their start during the Sears Festival?
I am one of those kids, yes. Because I went to Earl Haig Secondary School. They have an arts programme there. I did Sears for three years. It’s a lot of fun. You see a lot of good theatre. You learn a lot. It’s a good foray into festivals and professional theatre.

What’s your writing process like? Do you plot and plan, or start on page one and just go?
I think it depends on what my project is. A lot of the time, I’ve started with a bit of dialogue that comes to me somehow, and I write down on my phone before it all disappears from my brain. And then I’ll go back to that. Sometimes that will just flow out from there.

Sometimes it’s a more planned thing. I’ll come up with an idea or story first. This one, because it was for school and was gonna be written over a whole school year, was more plotted and planned. But I still would come up with bits of dialogue every so often, and [kept] those to the side somewhere on my phone.

How much research went into it?
Quite a bit, because a bunch of the project was doing your research and showing it. But I like that stuff, because I’m a nerd. I enjoy reading and finding cool facts, and all of that. I read a lot of her poetry, or translations of her poetry, and facts about her, or what we think we know about her. People’s thoughts on her. It was cool. There’s a lot of art based on her. So, quite a bit of research. More than I usually do.

With it being a school project, did you have certain deadlines you had to meet, or a set way to approach the writing process?
I think we did, earlier on. We had to pitch our idea first, with a 10-minute pitch kind of thing for the fellow playwriting majors – there weren’t that many of us. So that was definitely something you had to have done.

We had to have our idea by a certain point for sure, and I think it just became drafts after a while, or what would maybe become a draft after a while. Just so that we could be graded. But pretty much all of us were very passionate about what we were writing about, so it didn’t seem like work. A lot of the time, it seemed more like something we were proud of.

How did the storytelling and the form shift through the course of writing?
It took me a while to figure out how I was going to tell it. Because a big thing to me was that we don’t know much about her, and it’s a lot of what we’re putting into her mouth. Which is a lot of history, actually. So it took me a lot to format it, and then I came up with the lecture idea, but I didn’t want it to be a boring old lecture.

I don’t know how it came to me that I could use a Greek chorus. But it worked out, and all fit together in the end. A lot of my other work has more fast-talking, absurdist characters like the chorus, so they’re more what I’m used to writing. I’m not as used to writing the more realistic stuff. But it was a good challenge, and it never was an issue when I was writing it.

How did you get involved with Filament Incubator?
I just basically saw they had a call out for their season, and I submitted. I submit to a lot of things, so sometimes I forget what I submit to. Then I heard back from them, and they wanted to put it on for their second season.

Tell us about working with Claren Grosz, the director.
I had just stage-managed a show [Claren] had directed before she directed this show, so I knew her well, and I knew her directing. So I knew that would be a good fit, because she’s all about the female-driven pieces, which I obviously wanted for this play. Working with her, I was used to that. That went well, of course.

Were you in the room very much during the rehearsals?
I was only actually there in the audition process, which was my choice. I didn’t really want to be there for more of the rehearsals, because I thought that Claren could do it, or else I would have self-directed it. And I didn’t want to be too imposing. I know some actors don’t like when the playwright’s there, because I’m showing off or intimidating, or multiple reasons. So I was just there for the casting and the scriptwork stuff, the table work. Then I let them be free and take it.

Did you find the end product significantly different from what you had had in your head?
I hadn’t even thought about what I had in my head for it. I mean, I knew Kensington Hall before, as I think a lot of us do. But I think they did a very good job of making it not look as much like Kensington Hall, which was nice. They definitely did the text how I pictured it, because I think it reads for itself with pace and stuff. But I liked a lot of their acting choices, and a lot of their directing choices, and I was super happy with the outcome.

You mentioned you were in the audition process. Tell us a little bit about casting, and how the actors you found ended up shaping the characters that you wrote.
It’s definitely a tough play to cast, because for Sappho, we needed someone very strong and grounded, but she’s not a very likeable character. So we needed it to be someone who the audience could still understand why she was doing these things. So soft, but also strong, which is obviously a hard balance. So we saw a couple of women that maybe could have done the role, but we actually knew Olivia [Croft] from the production we had worked on before. We knew that she could handle the role and that she was super into the same kind of text, and very driven about it. So she was perfect for that.

The other three were difficult, because we needed people who could be very funny, and fast, but also go into more serious, and realistic moments. So Claren had them read various pieces from the play that could show that. I don’t know what I was expecting, but the three of them were perfect for the roles, and they definitely brought some good energies to the characters that we might not have found with other people. But they definitely made it their own, which was great.

Did you have a favourite moment in the production?
It’s hard, because I’m very judgmental, obviously, of some of my own writing. The parts with the “They” characters, the menacing hooded characters – I never know if it’s actually going to work. I guess people could take it very seriously, which I think all the audiences did, or you could take it that it’s very melodramatic, and either would have been fine. But I thought [Claren and the actors] did a very good job of making it serious, and I never saw an audience member laugh at it, or think it was stupid, that I know of. I think they did that very well. The whole thing was so fun. But I was very happy with those parts. Almost every night, I was like, “Oh, I don’t know.” I’m the only one cringing about it, but it worked out well, in the end.

What were you hoping audiences would take away from the production?
I think there’s definitely a message of people in general, but more so women, standing up for what they believe in. Sappho’s is obviously a [situation] that not a lot of people may be in, but just being able to speak out and not being shut down or erased, which now is very timely. It wasn’t when I wrote it. I wasn’t thinking about that. But just standing up for what you believe in or think is right.

What are you doing now, or what’s your next project?
I’m stage-managing at the moment, because that “pays the bills”, in big quotation marks. And I’m writing various things. My friend and I are writing a musical, because he’s a composer and pianist, and he studied musical theatre composition. So we’re both busy, but doing that as much as we can. I wrote a Western in university, which I really enjoyed doing. It was very freeing and fun to write, and so I’m writing another Western. A bunch of different projects. I have bits of things everywhere, and ideas written on pieces of paper that I’m sure I will get to eventually.

Do you have anything you’d like to add?
Thank you for this nomination. I’m super happy.