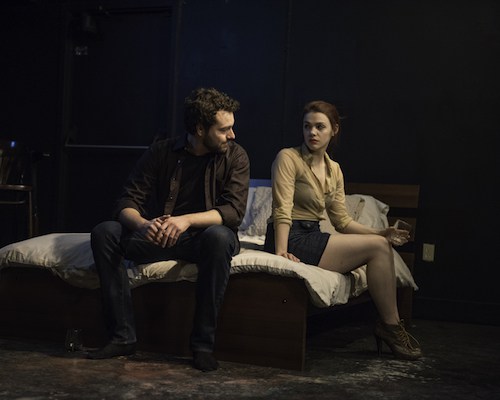 Homewrecker, a new two-hander play by Daniel Pagett, raises questions about who is to blame for the end of a marriage; Is it the husband who cheated, the other woman who knows he is married and sleeps with him anyway, or some combination of the two?

Recently divorced Craig (Blue Bigwood-Mallin) lures Veronica (Susannah Mackay), the woman he had an affair with, to his apartment under false pretences. Consumed by the knowledge that his wife blames the end of their marriage on his bestial inability to control his sexual urges, Craig sets out to prove that he is in control by conducting an experiment. He will spend twelve hours in a locked apartment with a woman he is sexually attracted to, without making a move. Veronica is initially reluctant to even see Craig (she literally hits him with the door on her way out), but relents when he offers her $5,000 to stay the night. As the bourbon flows, Veronica suggests they make it a wager. If Craig can woo her into consensually agreeing to sleep with him, then he can keep his five grand.

It’s an interesting premise and the plot never seems to drag thanks to engaging and generally surprising twists that drew gasps from the opening night audience. However, both characters are so duplicitous that it becomes difficult to tell where the lies end, or to feel any emotional attachment towards them.

Susannah Mackay’s Veronica exudes such confidence that it would be difficult to understand what she sees in Craig if we didn’t each know at least one beautiful, intelligent girl who has fallen for the wrong guy. She’s marginally more sympathetic than Blue Bigwood-Mallin‘s Craig, who is self-deprecating and self-aware, but ultimately still an asshole. Craig is so unapologetically awful that he uses his assholeness as an excuse, blaming the women who fall in love with him because he’s never hid his true nature. A major plot point revolves around Craig’s love for his wife, but when the only behaviour he seems to exhibit throughout the play is self-centred and devious, it’s difficult to believe in this all-encompassing love he supposedly has for Naomi.

Daniel Pagett’s script contains some sparkling banter, memorable lines of dialogue, and  promising quieter moments of self-reflection, however it relies too much on a heavy-handed repetition of the play’s tagline, “feelings aren’t facts” and lacks an emotional hook to draw us in. Ultimately Homewrecker provides thoughtful commentary on human nature, but I never connected with the characters or cared about their problems.