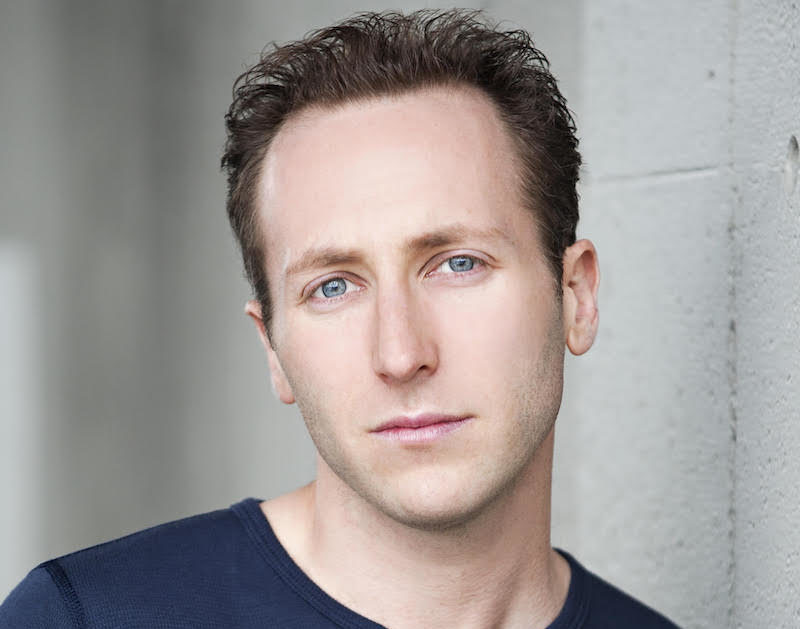 One of the most beautiful voices in Canadian musical theatre belongs to sweetheart tenor Josh Epstein. He’s nominated this year for Outstanding Performance in a Musical as tragic good guy Lensky in Amiel Gladstone & Veda Hille’s inventive adaptation of Onegin with the Musical Stage Company. Josh has been with the show since the very beginning, touring it across Canada before landing in Toronto to work with a new cast last spring. He’s currently in Edmonton on tour with Onegin but found a few minutes to answer our questions about Lensky, the development process, and where he goes from here.

Can you remember your first experience with theatre?
I played Michael Darling in the original production of Cathy Rigby’s Peter Pan. Long John Baldry, a blues legend, was Captain Hook and I just remember him seeming like he was 10 feet tall. He might have been. Trivia: Long John started the careers off for Elton John and Rod Stewart! Also this production still plays around the world many many decades later.

When did you first start singing?
I was taking piano lessons at about 6 with Elaine Lindberg and when I would play notes I would sing them at the same time. Eventually she just gave up on the piano and taught me singing instead.

How did you get involved with Onegin?
I’ve worked with Ami [Gladstone] and Veda [Hille] before, workshopping and appearing in Craigslist Cantata, so they were very familiar with me, and I was in love with them. Onegin started as a very casual workshop with what ended up being the original cast. We share a bond having done those initial workshops together and have grown into the project. It’s an experience I’ve always wanted.

You’ve been with Onegin through multiple iterations. What are some of the rewards and challenges of working on a new musical?
It’s harder to craft a good musical than a play or a movie. It just is. Musicals are crafted with distractions (songs) from the plot all the way through it, so the story has to be so strong to survive those distractions or the audience just doesn’t care. But when a good musical comes along like this one, and it was good from the very first workshop, it can break and excite your heart all at once like nothing else. That core of the show will always be there in different productions it’s just up to us to bring it to life, be present, be generous and be grateful.

The musical is based on a poem that’s been adapted and re-adapted across many theatrical mediums. Did you do much research into those other adaptations? How is this Lensky similar or different from other incarnations?
Sure, I read the book, have not seen the opera/ballet though. I love research but I really felt my research for this role/show was the workshops. Learning the music early on, knowing what Veda and Ami were going for, having it adapted to my voice, my skills, which they are adept at doing just made the part feel like one with me.

I think Lensky will always be passionate, wearing his heart on his sleeve, a little bit afraid and full of heart.

How did the casting changes affect the character dynamics going into the Toronto run?
I tried to censor myself to never say the words ‘Well, in Vancouver we did it this way…’ I told them to hit me if I ever said it. I think in Toronto I really took a step back actually at first in rehearsals to watch and take from this new cast the direction they wanted to go with the show. They were incredibly gracious to me but they really didn’t need my insight, they all came with their own ideas and offers. More so, I was grateful for the chance to re-examine the role and go deeper with it.

The score blends traditional musical theatre styles with Russian influences and contemporary rock sounds. How did the musical style of each song influence the acting choices you made for the character?
You let Veda do the work for you. I’ve never sung anything that’s just flown off the chords like Veda’s work. I know her quite well so I also know some of her tastes. I take out a lot of the vibrato, I don’t throw in lame pop licks, etc. Just bring warmth, some rock, and some ping to it.

Do you have a favourite moment from the production?
So many. Truthfully, it has to be one of the only shows I’ve never tired of. I love my moments with Tatyana since they aren’t necessarily built into the show, they’ve been developed with both actresses who have played it (Meg Roe, Hailey Gillis).

I love the opening number and the audience participation, you get a rush right before heading out to talk to someone as you really have no idea how it’s going to go. I also love watching the audience deliver the letter to Onegin, I get a kick out of that every night.

Have you noticed any major differences in how the work is perceived as you put it up in different parts of the country?
Truthfully, in Vancouver/Victoria/Alberta people were clamouring over the show and we felt like rock stars. Toronto had a different vibe but you have to know Toronto only had a few weeks of rehearsals before we opened. Vancouver we had two years to workshop and grow into and with these roles. It really felt in the second week of the Toronto run the show really started to cook and the audiences in Toronto seemed to adopt the show like everywhere else.

If you could play any role in musical theatre, which would you choose?
Leo – Parade. It will happen one day. A difficult show to do because it’s big, yet dark and not based on any famous Disney movie. The story is timeless and always relevant so it will be done again.

What are you working on now/next?
I’m taking 6 months to work just on film writing and producing. I work with Kyle Rideout and our company Motion 58 has a couple of film and TV projects in development. Our film Adventures in Public School just premiered at TIFF and we’re up for CSA for best screenplay in March. It will be distributed across the US/CAN/UK in March/April this year so look for it!