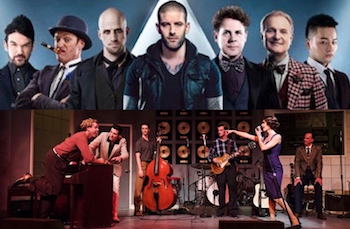 To supplement their mainstage season of big American tours, Toronto’s one real commercial theatre presenter Mirvish Productions has been bringing in slightly smaller shows produced by Canadian companies to occupy the mid-sized mid-town venue formerly known as the Panasonic (it’s now the CAA Theatre, which I doubt I’ll ever get used to). In general, this is a very good thing, giving Canadian productions a chance to reach a wider audience and build on the momentum from their original run. The only problem with this excellent system is the same problem occasionally faced by the mainstage shows- a breakdown of curation. When this happens on Mirvish’s bigger stages, the production itself is usually in fine shape, someone just programmed an on-the-page bad show in a moment of bad taste or bad instincts (here’s lookin’ at you, Bat Out Of Hell). But here we have the opposite problem. At the CAA right now, someone’s had the good idea of bringing in a well-constructed, fun, marketable musical with a small cast, great music, and an engaging but simple story. Million Dollar Quartet, a charming one-act about the real-life 1956 jam session between Carl Perkins, Johnny Cash, Elvis Presley and Jerry Lee Lewis, is an unremarkable but thoroughly enjoyable musical. The Drayton Entertainment production that Mirvish has remounted in this case, however, is not up to snuff and whomever made the call that it deserved a bigger stage and a broader audience should have been more discerning. The voices are all good, as are the instrumental theatrics like Lewis’ piano thumping and Perkins’ guitar skills (not to mention Zachary Knowles who turns the bit part of the bass player into a show stealer with his trademark goshdarned enthusiasm), so the classic music that is the bread and butter of Million Dollar Quartet works and that’s half the battle won. But the acting is across-the-board plain old bad and the men playing legends all read about 20 years older than they’re supposed to, with the possible exception of Tyler Check whose wide-eyed Carl Perkins at least flirts with believability (Lewis & Presley were 21 in 1956; Perkins & Cash were 24). I want to heartily encourage Mirvish to keep giving Canadian companies a shot at remounting at CAA or even one of the bigger theatres but they need to be pickier about who gets that shot; the talent is out there, Mirvish just has to put in the legwork to find the right stuff.

Downtown at the Princess of Wales, on the other hand, Mirvish has brought in a rare non-musical that thoughtfully off-sets the rest of their mainstage season and showcases a theatrical art not often well showcased. The Illusionists is a delight; a well-balanced, perfectly curated collection of artists representing different types of stage magic. I doubt I’d be interested in a full two-hour show from any of these performers (or any magician, really) but The Illusionists is brilliantly constructed as a sample platter of diverse acts that transition quickly and rotate at a rate that never lets the audience get bored or start to over-analyze.

Over-analysis is my problem with magic- I can’t get out of my head, I try to figure out the trick, I hate being lied to so much that I get angry with performers who claim their pockets are empty when reason dictates they’re not- but only one act in this current iteration of The Illusionists is easy enough to figure out that I started resenting the implication that I could be tricked (Colin Cloud’s psychic act is far too basic for the company he keeps). The other six performers are an entertaining mixture of old-fashioned expertise and contemporary flash. Charlie Frye juggles and does fantastic ring work with the help of his wife Sherry playing a refreshingly begrudging assistant; Raymond Crowe reshapes old standards (a dancing sportscoat, shadow puppets) into movingly earnest narratives. They’re the least flashy acts on the bill but are rooted in strong characters and diligent technique, earning every crowd reaction with pure skill and showmanship. The show plays out almost like a series of vignettes, strung together by Jeff Hobson who does crowd work and plays the hokey Vegas showman with a combination of simple, well-executed illusions and (I assume) purposefully groan-worthy humour. He flirts shamelessly with his volunteers (police chief Mark Saunders proved an excellent sport on opening night, even when he got his watch “stolen”) and, though his Canada jokes grow tired immediately, his irritating scamp routine brings key self-deprecating levity to a show that’s all fun and games but, without Hobson, could maybe risk slipping into accidentally hilarious self-serious territory.

The balance is important, because the serious acts are the real show-stoppers. An Ha Lim performs a spectacle of cool-headed card manipulation that could make a believer out of anyone, and daredevil Jonathan Goodwin plays with fire and crossbows in the evening’s most impressive display of effortless stage presence, hardcore preparation, and pure theatrical guts. Arguably the headliner- though part of The Illusionists‘ appeal is that there is no real headliner- Darcy Oake plays The Grand Illusionist and delivers the sort of big-ticket trickery that I can only describe as “hot guy magic” (but with birds, an accessory not usually associated with hot guys). You know the type- bare arms, unnecessary swagger, even less necessary sexy backup dancers, appearing out of thin air posing in front of a motorcycle that serves no purpose other than to be a cool prop to pose in front of- but he’s smart enough to back up the flash with substance, executing the big illusions with precision and breaking them up with a bit of close-up table work to prove he does actually have the goods when he has neither shock nor awe to lean on.

The Illusionists got me out of my doubting head, which no magic show has ever succeeded in doing. Most of the featured illusions are more skill than trick and they’re all executed to a level that quickly made me give up trying to figure them out. The lineup of performers changes with every iteration of the show but this particular group complements each other beautifully, never giving the audience too much of one thing and awesomely showcasing just how many things “magic” can mean.

The Illusionists plays at the Princess of Wales Theatre and Million Dollar Quartet at the CAA Theatre both until January 2018. Get your tickets HERE.