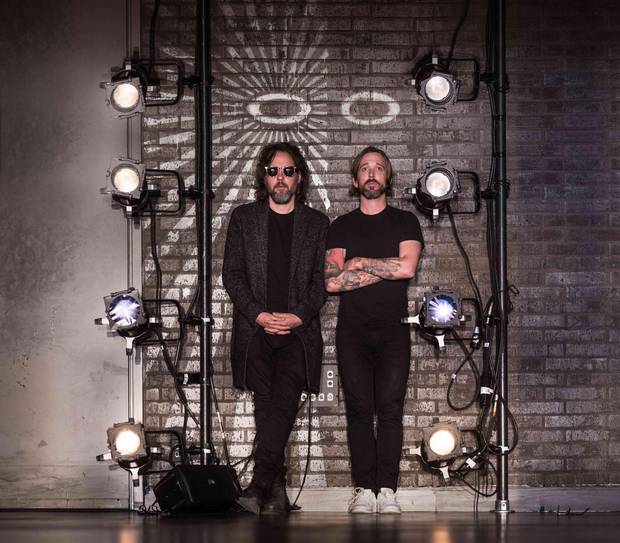 A&R Angels – Send ​Anyone Else To Save Me

A&R Angels is a story about two songwriting guardian angels who use their music to pull people back from the brink of suicide. Though late in their career, their music is failing to connect with people the way it used to. They only have a few chances left to prove they still can still be that voice. Sounds interesting enough, right?

The play was written by that guy from Broken Social Scene whose name I can never remember but it’s definitely something with a K. and a D. (Ken Drew? Kyle Dury? Kevin Dean?). Anyways, Kraft Dinner wrote this thing and also plays the lead, alongside his songwriting partner, the guy from Billy Talent (who obviously has a real name, but let’s call him Billy). There’s a small cast of supporting characters around them, all played by people who are actually talented actors, but let’s get into that later.

I find it pretty self indulgent to write a play about your music being SO GOOD that it can literally stop someone from taking their life despite all the nuance that led them to that moment, not to mention casting yourself as the hotshot flawed artist who’s too cool to give a damn and only cares about the music, man. This annoyance is exacerbated by the fact that KD’s character is so genuinely unlikable that he lost me in act one.

Now, I should say upfront that my cynicism and tastes are rarely forgiving, and I’ve never had any interest in either of the mega-star bands these artists hail from. That said, I did go into this with an open mind ready to be objective. Also I tend to gravitate towards art & music that engages with death, depression, and suicide with alarming frequency, so naturally my take on this kind of stuff is sacrosanct.

In the upscale lobby of the venue, you can find some content warning signs posted about. They’re pretty easy to miss, though – I myself didn’t spot one until after the show. I’d wager a better place for them would be, I don’t know… maybe the programme that is handed to every attendee? But what’s worse than this CW clearly being an afterthought is the script’s blasé handling of the subject matter.

Over the course of the story, we see three scenes with people on the threshold of death, noose around their neck, gun in their mouth, toxins ingested. In their final moments, the lights flicker, time stops, and two guardian angels lazily stroll in to save the day. There’s some comedic fun as two roadies set up amps and instruments for the performance. I’m immediately distracted by the wardrobe choices, simultaneously contrived and yet so authentic they might have just worn their own clothes. Billy’s white shoes & grey hat bookending an all-black outfit is enough for an eyeroll, but it’s no match for Kip Drordy’s absurdly oversized scarf & bro-y baseball cap combo. I try as best as I can to avoid the now meaningless term “hipster” but boy howdy, they’re making it difficult.

With heaps of disdain, our heroes start reciting details about the person they’re about to save – family facts, career, reasons for suicide, etc. It’s clear they regard these people as degenerates, despite the gravity of their task and the empathy required to reach them. They prattle on about which song is best for the situation, and which rewrites they agreed upon for the tunes. These behind-the-music exchanges are the core humour of the production, and they’re worth a chuckle the first few times, but this material is beaten to death over the show’s runtime. After three centuries, they finally stop arguing and start their song. King Diamond has a decent singing voice but, just as I’m thinking “this song is bad and won’t save anybody”, the man in crisis decides enough is enough and kicks the chair out.

Kim Darby erupts into a furious string of tasteless curses at the now-lifeless corpse, which of course each time includes something homophobic such as “limp-wristed” and “cock sucker”. These are deliberate choices in a well-rehearsed script, and that does not go unnoticed.

The next scene opens on a sauna with an Artist Representative and his assistant, played by Maurice Dean Wint and Graham Cuthbertson respectively. Their conversation gives us some deeper insights into the details of this high-concept/low-fantasy rock show. Apparently the boys are the best of the best and have more number one hits than anyone else in a whole roster of music angels in this line of work! Obviously this plot demands you to suspend your disbelief quite a bit, but that’s more than I can muster.

Wint’s performance however, is remarkable. He’s convincing as his character, committed down to every movement, and genuinely funny. He single-handedly pulled me back in. Cuthbertson as his assistant is also quite good. A keen eye spots that these two are the roadies in a full transformation from their other roles. They are soon joined by the band and Wint delivers a gentle browbeat, telling them they’ve got two chances left before they essentially get their wings taken away. It’s worth noting that this means they’ve failed their last eleven interventions, at the cost of eleven lives. They need to get their shit together, and quick.

To nobody’s surprise, they botch their next one as well, and treat that human being with about as much respect as the last one. Oh, and during sound check they accidentally discover a feedback frequency that can ‘wake up’ the frozen people. This will come in handy when they use it intentionally during number three. Throughout the play there’s some hints dropped about Kent Dunbar’s lost love interest/muse, which makes me wonder if we’ll ever actually see a single female cast member. Thankfully, she arrives in the final act in a twist that can’t possibly have shocked anyone -spoiler alert- she’s their third and final victim.

The actress behind this character, Ngozi Paul, is absolutely fantastic. Her fury at the invaders in her home is so real. After calming down enough for conversation, we learn more about why she’s ending her life. She delivers an incredible monologue about the lights in her life going out. Real tears stream down her face with the raw emotion and tangible sadness that this subject matter ought to fucking have. They go through some additional world building about how if the angel’s song is successful in saving a life, the person they save knows that song and gets it out into the world by ‘writing’ it themselves. The implications of this being that every ballad you’ve ever heard are from these interventionists.

Unfortunately, red flags begin sprouting up on the stage as it’s revealed that Ken Danger has basically been stalking her since she was a child and creepily writes his love songs about her. He also states that she and him wrote this song “together” (aka him stalking her and stealing the melody she hummed to herself when she thought she was alone in her apartment). She says in disbelief “My guardian angel is a white guy?!”, Paul being a woman of colour. Later when the AR and his assistant arrive, she remarks that “Sure are a lot of dudes in the afterlife”. These little attempts at humorous self-awareness fall a little flat considering they could have written another woman in somewhere, even as the assistant.

Anyways, after way too much of this scene and a weird change of tune from Paul’s character despite zero accountability from this sketchy guy, the duo do their final performance of the song they’ve been working up to all night, and I guess it’s supposed to be really good, but it’s not. Thankfully the ending wraps up quickly afterwards with what is actually kind of funny: an extremely accurate 2017 Top 40 version of their song, now out in the human world, because it successfully saved her.

I suppose it’s fitting that a play with a title referencing a bygone career is so out of touch. Between his mocking complaints about the noise that kids are listening to nowadays, his failure to respectfully engage with such a heavy subject, his offensive dialogue choices, his mopey and unlikable personality, and that fucking scarf, I can honestly say Kevin Drew is the worst part of his own creation. I debated titling this review “How Dare You”, as the buildup of highly questionable choices definitely tipped the scales for me.

Billy acts his heart out and is very enjoyable even though his performance can’t keep up with the real stars, Wint and Paul. There are some good laughs here and there. The set design, score, lighting, and sound are all top notch. The concept might be worthwhile as a TV series. There’s some stuff in there worth checking out; I’m glad I did, despite it all.