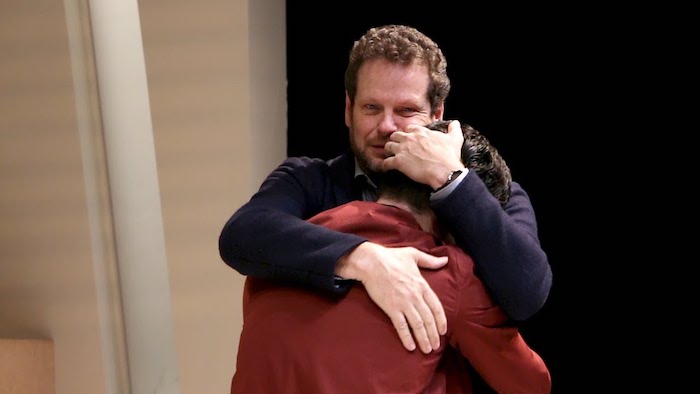 Edward Albee’s The Goat or, Who Is Sylvia? is currently on at Soulpepper, directed by Alan Dilworth. I love this play for so many reasons, not least of which is that I think it’s a great example of a man actually writing an amazing and complex female lead character, who essentially carries the entire show.

The play is about something at once very common and very uncommon: a man has an affair. His wife finds out. (Oh yeah: spoiler alert). What’s unusual about this particular story is that he’s not having an affair with his secretary Lucy Something, or with the ex-wife of one of a friend. He’s having an affair with a goat.

Derek Boyes, though playing a supporting role, strikes me as bringing the most impressive performance in the piece. He is perfect as Martin’s best friend in both his devastation and disgust. Paolo Santalucia as the teenage son is less compelling, acting the way we often think teenagers act more than how they actually act.

Albert Shultz as the hapless Martin is good but somewhat unremarkable. Admittedly, I find it hard to know what an ideal portrayal of Martin would even be, because his struggle is extremely internal, something I think can be difficult to portray on a stage, especially compared to his wife Stevie’s reactions which are much more, well, overt. But even his wails of grief at the end of the show left me a bit cold.

Having said that, Schultz’s chemistry with Raquel Duffy, who plays Stevie, hits exactly the right note. They set the relationship up as deeply affectionate and familiar with a real feeling of the history between them. This is key for the second half of the play, in which something seemingly so well-balanced, so polished, so beautiful, is ruptured by Martin’s secret (much like the subsequent family heirlooms Stevie proceeds to smash in what is both an extremely realistic exorcism of emotion, and a metaphorical reminder of the fracture of two people who thought they knew each other so well).

Which brings us to Stevie. How Stevie is played really informs the meaning of the action. Ultimately Duffy is a tad reserved for my taste. I admit this is absolutely a reading of Stevie that makes sense- she is kind of a WASP, not uptight in an extreme sense but someone whose goofing around happens within a narrow framework of what is considered ‘appropriate’, and between the shock and her socialization, she’d potentially be someone who has trouble letting go, of being completely inside her anger. (The heels she’s been stuck in for the whole performance don’t help either.) And Duffy’s performance of that reading is solid. Her delivery of some of Albee’s amazing and spiteful lines – ‘You men really are the end’ – are satisfying and hilarious. And yet, I still find it dissatisfying. This is a character who arguably does lose control. By the end of the play she commits an action that is both consistent with her emotional journey and yet completely foreign to who she thought she’d ever be, which is part of what makes Albee’s plays so compelling. Something drastic has just happened not just to her marriage, not just to her life, but to her very identity, and she is unequipped to handle it. It feels in some ways like a kind of modern version of a Greek tragedy, in the sense that the emotional and visceral experience of being a human cannot fit itself within the rather narrow confines of social norms and social reason, that we are unable to deal with that dissonance, and so something needs to be destroyed, literally or figuratively. And for me, Duffy – while doing a good job – never really hit the level of emotional release I needed from her. I wanted to feel the rage motivating her violent outbursts, her wails of sadness and rage and grief. I did not.

Duffy’s choice to play Stevie as somewhat reluctant to really lose control over emotions lines up with the kind of social world she might have come from, but it also makes her murdering of the goat seem much more like a conscious decision. On this reading, Stevie’s character becomes much darker, much more spiteful, and much more calculating, which seems out of step with the rest of the play.

Dilworth’s choice to have such a realistic goat at the end also works against the action. It distracts the focus from what matters most in this play, which are the very raw, human emotions on display here. This play is about a taboo, sure – Stevie rants at one point that this is not something she could ever have prepared for – but it’s also about heartbreak and grief. While the production overall is good, and very polished, it lacks the intense desperation that this show needs for a satisfying catharsis.