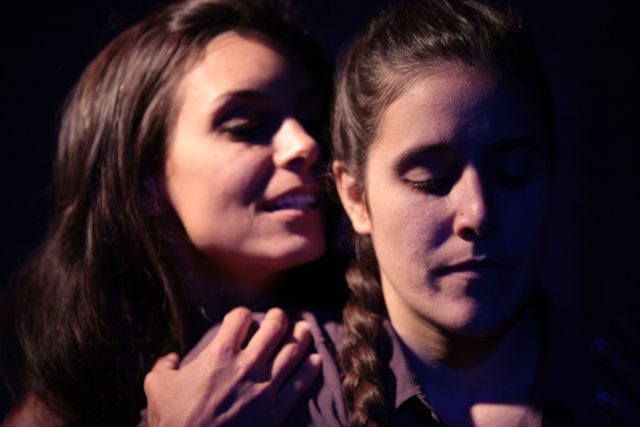 The social world envisioned by Oscar Wilde in his famous novel is overpopulated with vain and calculating social-climbers. It remains a merciless, appropriately florid thesis on how desire and vanity exist in tandem with artistic creation, almost inevitably corrupting the soul of both the artist and the subject of their art. In this updated adaptation, produced by Theatre Inamorata, Kristofer Van Soelen takes this truth and easily shows its timelessness, throwing a more obviously satirical but equally harsh light on the modern art world as seen through a newcomer who eventually becomes both its cruellest perpetrator and most damaged victim.

The setting is modern-day Toronto, with Dorian (Tennille Read – the character, along with most of the rest of the novel’s cast, has been changed from male to female, in keeping with Theatre Inamorata’s mandate of staging classical pieces featuring predominantly women) having recently arrived to the city from Caledon. She has befriended Jane (Ximena Huizi, thoughtful and poised), who uses her as a model for her sculpting, and is then quickly taken under the wing of Opal (an entertaining and very quick Michelle Langille). Opal is a cynical, charismatic agent capable of a dozen quips a minute, who professes disdain for the superficiality of the art world while relying on it to wrangle success for her and her clients. Through her, Dorian is soon introduced to the modern art scene, including Sibyl (Sydney Violet Bristow, very moving), an aspiring actress whose lead performance in a production of Romeo and Juliet captures Dorian’s imagination and launches her exploitative ambition.

Read gives Dorian a charming, almost slapstick guilelessness that makes it hard initially to imagine how she’ll transition into the ruthless opportunist of the original story – but she pulls it off with aplomb, zeroing in on the character’s growing enthusiasm for recognition, and letting that run rampant over everything that gets in her way. The rest of the cast is just as strong, with Mamito Kukwikila giving a very compelling and poised performance as Laura, Opal’s warm, perceptive wife, and Edward Charette, gamely covering all the male roles, also doing excellent work. All are very cohesive as an ensemble which focuses on a closely-connected group of women who rely on each other for work, friendship and romance, but who are also prey to the cruelty of the commercial art world.

Courtney Ch’ng Lancaster’s careful direction and Van Soelen’s barbed script work in tandem to show both the strength of this world and its drawbacks, using Wilde’s work as a sweetly brutal frame. The play is in many ways an appropriately modern depiction of superficiality in a cultural enclave that rewards the attention-grabbing spectacle over more artistically ambitious, deeply considered work, and Dorian’s story seems in part to be about how the her beauty is enhanced by being at the centre of the cultural hoi polloi. With this in mind, Van Soelen cannily has Dorian display a false veneer of allyship to women she seduces and whose marginalized status makes them perhaps more interesting and easily exploitable to her. When Sybil, who is trans, is thoughtlessly deadnamed by her semi-estranged brother (Charette), Dorian expresses outrage on Sybil’s behalf before almost immediately dumping her after she gives a shaky performance following the confrontation. Without constant displays of talent, Sybil becomes a less interesting prospect for Dorian. Later, in her seduction of Laura, Dorian abruptly bemoans how difficult it must be for her as a black gay woman to move through society, a statement whose sincerity is undermined by Dorian’s clear indifference to the suffering of others. These moments astutely update the insight of Wilde’s original, transplanting the same vanity and impulse for exploitation, and placing them in a harshly topical context.

Though one or two plot threads are left hanging, the play mostly does a nice job of telling a short, sharp tragic satire. All of the above makes watching the work sound perhaps much heavier than it is, and while it indeed has its fair share of emotional violence as it charts Dorian’s descent, the gorier parts of the story have been removed, leaving the betrayal and shattered relationships, but excising all the murder. The first half, particularly in scenes that feature Langille, is quite comic, and as with Read’s performance, the script and direction do a nice job of taking us into the second half’s tougher parts.

Andy Trithardt’s score is moody and richly layered, while Lindsay Wood’s set, which alternates amongst other places between an apartment, an upscale restaurant, and a theatre, all with the aid of nicely choreographed transitions by the cast, is a furnished blast of white – an almost neutral space (even the pictures, tellingly, are absent from the frames that decorate the walls) which removes almost all identifiable pieces of art from the room. One of the few visible pieces is of course the sculpture itself, replacing the novel’s painting: in a society that often prioritizes the brand of the creator themselves rather than their creation, it’s perhaps appropriate that the art in question is a body.