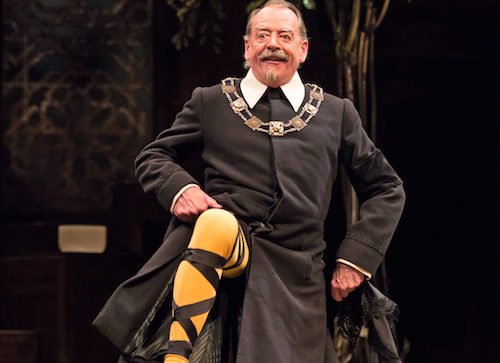 I promise everything gets better from here. Please keep in mind that I refuse to pull punches so you can believe me when I tell you you really should see the other stuff. Warning: brutality ahead.

Twelfth Night
I consider Twelfth Night to be Shakespeare’s most perfect text. That’s not to say it’s my favourite (perfect’s never really been my thing) but it’s nearly impossible to screw up. Accessible language and an engaging plot that’s easy to follow make it newbie-friendly and the unique distribution of material across a big ensemble gives it great rewatch value because different performers tend to make a different character the star in any given production. The script sets up big-laugh moments no matter what kind of comedy you’re into (physical gags and wordplay and snark and debauchery and all of it) but the subtextual darkness of the subplot and the high emotional stakes of the main plot give the story the dramatic heft a lot of the other comedies are missing. I’ve seen countless Twelfth Nights and can report that there isn’t a single character unable to be made wonderful by the right interpretation (no, not even Fabian). It’s nearly impossible to screw up Twelfth Night. Alas, Stratford found a way. Humourless and heartless, Martha Henry’s interpretation is apparently no interpretation whatsoever. The setting appears to have no real time or place and the aesthetic is mostly defined by scarves (Olivia wears some nice dresses, it’s a shame her entire character seems to be “nice dresses”). Diverse casting and a purposeful accent or two looks like it might lead somewhere interesting but absolutely nothing is made of it. I’ve already forgotten every single detail of Rod Beattie’s Malvolio, and I never forget a Malvolio. Brent Carver’s vocals are Brent Carver’s vocals but even those can’t save a Feste who has nothing to say. EB Smith lets out one small moment of aggression that might be an interesting take on Orsino if it wasn’t so fleeting and nothing could be duller than Geraint Wyn Davies’ predictable take on Toby (at least he isn’t doing an accent). Tom Rooney appears to be having fun as Andrew (at least someone is) and Michael Blake shines in the too-small role of Sebastian but mostly their presence reminds me of the last Twelfth Night they appeared in together (Stratford 2011), which remains my favourite of all time. Only Mac Fyfe managed to surprise me in any positive way, though it did tug at my heartstrings to see a Toronto performer of his star quality move to Stratford and play what’s essentially a spear-carrier role (he has more to do in Bakkhai, but still). He makes a meal of Valentine, turning a handful of lines into an actual character, a sneering, skeptical, competitive Sheriff of Nottingham type who succeeds at least somewhat in raising the stakes on Viola’s deception. Twelfth Night in the Stratford Festival Theatre was the very first Shakespeare production I ever saw and everything I am came after that. All I can hope is that the reluctant kids who get dragged to this Twelfth Night on their grade 7 field trip give Shakespeare a second chance to make a first impression.

The Komagata Maru Incident
This dry, over-stylized drama about a shameful moment in Canadian immigration history is narrated (sort of) by a circus master who giggles and grins and dances and at one point imitates a bird. It’s one of the most obnoxious performance I’ve ever seen and it also happens to be the only good one in a show full of actors straining under the weight of accents they can’t master, natural presence they don’t have, and lines they apparently are unable to memorize to any kind of professional standard. An interesting and important story deserved better than this awkward, forced production.

School for Scandal
Sébastien Heins’ sparkling turn as a screwup who means well (at least compared to everyone else in this vapid world) is the saving grace of this dull, dated comedy looking to make a meaningful point about, I don’t know, social media or something. I couldn’t be more tired of cranky old people griping about the internet (and celebrity culture! And smart phones! And ungrateful young people!) and Stratford’s 2017 trend of shoehorning tired Trump jokes into every other production only adds to the groan-worthy feeling that everything is just one big pander to a subscriber base whose comic instincts were honed by watching 20 years of Jay Leno. Oh my, an anachronistic joke about a topic on which everyone in the room agrees; how bold! I appreciate the utter sincerity with which Shannon Taylor delivers her final monologue but most everything else here is too proud of itself to be honest and too tropey to be insightful. It’s just a lot of moralizing and gasping and wigs.

HMS Pinafore
The Stratford Festival (represented in the form of Artistic Director Antoni Cimolino, a company man who embodies the spirit and limitations of the place and its history to a fault) is afraid of musical theatre, or perhaps criminally ignorant of it, one of the two. With the exception of one old-timey “new work” in 2012, the company has never presented a musical written after 1990 (I can think of only one written after 1980) and, of those pre-1980 pieces, almost none have been what one might call adventurous (next year’s Rocky Horror Show may be a step in the right direction but it’s certainly still, um, of an age). I understand that Gilbert & Sullivan played a major role in Stratford’s history but not every piece of programming can be about history. There are hundreds of wonderful (accessible, subscriber-safe, family-friendly, name-brand!) musicals to choose from. Give me one good reason we’re back at this well. At least the last time G&S showed up in Stratford, they were brought here by an inventive, fun director who invigorated The Pirates of Penzance with intelligent metatheatricality, spot-on casting, and a contemporary sensibility. You can’t pull G&S out of its period because even less about the plot will make sense than it already does but you at least can add a frame, maybe lean into the heightened nonsense of it all, give the audience some sense that you’re a modern human with modern artistic ideals who knows that this as reductive and stuck as it is. Yet I took my seat in the Avon theatre and found a note scrawled across the curtain indicating that this production of arguably the least interesting Gilbert & Sullivan text was to be set in 1917. And that was just the frame device! A frame device is usually a way for directors to escape the limitations of time and place and provide something of a modern wink to a dated show- but not here, here it serves absolutely no purpose whatsoever. The casting skews old and predictable with only one exciting new talent to speak of (Devon Michael Brown who sparkles from the chorus but is still in the damn chorus), the direction is even less interesting, and the female ensemble has little to do other than walk on, sit, sing some echoes, and walk off (reason #572 to stop programming material this outdated). I’m not a general Gilbert & Sullivan hater, I’m really not, but this production does nothing with a show that has no business being programmed. Don’t tell me it was what the subscribers wanted- you’re the artists, lead from the front!