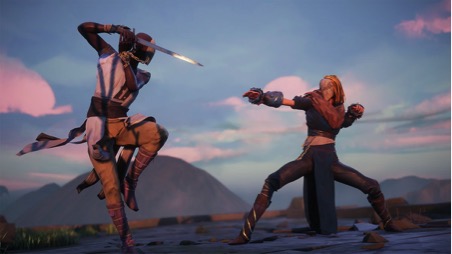 My new show is open so I’ve got a bit more time to play games. Here’s what I’ve dipped into this week. These aren’t reviews, as I’ve only had a few hours with each one, but little snapshots of what I think. If I continue with any of them, you may see follow-ups in future columns.

Devolver Digital continues their domination of the indie market with this 3rd person martial arts action adventure. Absolver is cut from the Dark Souls mold in that it has mystery and trial-and-error where most games have rendered cinematics and tutorials. I’m still figuring it out but the basic concept is really intriguing: by blocking or evading moves from NPCs and other players you build a deck of punches and kicks that you assemble into combos using a move editor, similar to Remember Me but much more complex. Using the right stick you can switch between four different stances, each with its own combo, and one combo could start in one stance but finish in another, allowing you to string together 6 or 7 moves at a time. Adding directional based dodges by using the right stick, blocking, parrying, and two weapons styles makes Absolver’s depth, coupled with its From Software obtuseness, pretty daunting. So far the animation and the fluidity, along with the oil painting aesthetic, is keeping me going and the always-on multiplayer is actually cooler than it is annoying, with other fighters able to jump into hard fights to help out, or challenge you to duels when there aren’t any NPCs around. It’s also noteworthy just for its uniqueness: the last hand-to-hand martial arts game I played was probably Bungie’s Oni, way back before Halo.

The long-awaited sequel to Bungie’s solid but flawed online shooter comes out next week and the PC beta landed on Wednesday. Having Bungie back on PC is great and the beta runs amazing, even on my i7, 960m laptop. I’ve only played the opening mission but it looks like they’re finally trying to make a coherent story with all the characters and lore they’ve built up over the last two years. Bungie’s art design remains at the top of the game and no one makes a shooter that feels as tight and responsive and impactful as they do. That first mission was the closest to Halo I’ve felt in a shooter since, well, Halo: Reach: in design, chatter, spectacle, gunplay, and scale. I’m excited to dust off my Warlock and dive in next week as the best thing about Destiny 1 was picking up your story where you left off when a new expansion dropped. Hopefully the following hours will stay as tight as the initial one.

The ‘reimagined’ Battlestar Galactica is one of my favourite shows despite, or maybe because, it’s so uneven. One thing it absolutely nailed was the feel of its cold, military sci-fi world and Deadlock, a new turn-based strategy game from Slytherine Games, does a lot to ape that feeling. It’s a tragedy that BSG never got a proper game adaptation but there have been some great mods over the years and Slytherine takes some cues from the Homeworld mod Fleet Commander, as well as the FreeSpace 2 mod Beyond the Red Line, to craft a satisfyingly nostalgic tactical strategy game set during the First Cylon War, with all the taiko drums and ‘So Say We All’s you could want. The game itself plays like Fantasy Flight’s Star Wars miniatures games, where each player decides where their ships will move and how they’ll fire their weapons in secret, then all the ships on the board move at once. This creates some cool issues you don’t see in many strategy games, like collisions and friendly fire. You could definitely read your opponent wrong, zig when you should have zagged, and end up slamming one of your corvettes into a Cylon carrier. The game looks and feels a bit like a budget title, a low-res skybox being the biggest issue, and the writing and voice acting isn’t great but the nuts and bolts of the gameplay are awesome. At the end of each battle you can also watch a cinematic replay of the fight, and the AI camera does a good job of aping the look that director Michael Rymer used to such good effect in the show: cameras are bolted onto the sides of Vipers and shaky zooms as missiles impact targets all sell the homage. One thing I’m missing is the sound effects. Those bassy ‘whomps’ from the big guns are muted, even in the replay’s closeups, and you spend most of the battles listening to only music and UI sounds. As a result it’s lacking some of the punch of the show. One thing that is sorely absent is the distinct hollow sweeping sound of the DRADIS, which was a constant background feature of any scenes taking place on Galactica’s CIC. I’m interested to see what the modding community does with this, as it’s primed for higher res textures, better fidelity sounds, and some UI touches that would bring it closer to the show. I wouldn’t mind a straight conversion to Star Wars or Wing Commander, either.

I have always been a defender of NMS, you can go through the archives for proof, but the massive Atlas Rises update a few weeks ago has finally bought Hello Games some goodwill in the mainstream gaming press. Hello has been toiling away on free expansions all year, with last winter’s Pathfinder being the biggest, adding base building and MAKO-like driveable rovers. Atlas Rises adds the largest thing missing from NMS at launch: quests and smaller stories woven into the larger ‘plot’ of the journey to the centre of the galaxy. I’ve been chasing down the ‘Artemis’ quest and it adds a welcome amount of flavour (And a bit of existential horror) to the dreamy, colourful landscapes of NMS. NMS has always been the bubblegum brother to Elite: Dangerous and it’s interesting to see both games moving in parallel: one doubling down on its hard science, the other embracing its weird, Moebius-inspired aesthetic. If you never played No Man’s Sky, this is a great time to check it out.