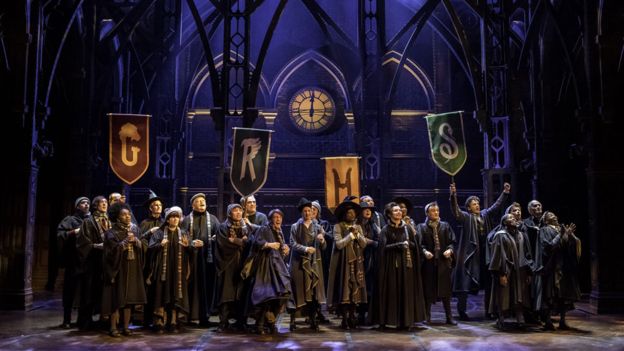 Harry Potter and the Cursed Child

One afternoon in 1998, the awkward 12 year-old that was me trudged home from middle school to discover a gift sitting on the table. A children’s librarian had recommended that my mother give my sister and I a copy of a brand new novel that she had read and loved. Although I had never heard of the author, I quickly lost myself in her writing – Harry Potter and the Sorcerers Stone was a page turner. I quite literally grew up with Harry Potter, aging only slightly faster than the fictional hero, and became a steadfast advocate for the boy wizard. When the middle school librarian said that he had never heard of Harry Potter, I helped him find a copy on the internet and explained the value of adding it to the school’s collection. When a local pastor denounced the book and other classics, suggesting they be banned from classrooms, I wrote a letter to the editor of the local newspaper defending the rights of students to read literary works of all types, including Harry Potter. Nearly every year it seemed that another installment of the Potter saga was released and, while the hype grew with each midnight Potter party, there was something entirely comfortable and personal about returning to world of Harry Potter throughout my teen years.

Admittedly, I grew disenchanted with the film franchise, having seen only parts of the last several movies, and I have yet to venture to the theme park at Universal Studios. My old books sit on the bottom of my bookshelf, prized but generally untouched and dusty. So, when Harry Potter and the Cursed Child was published, I purchased a copy and promptly tucked the unread script away. While Harry Potter was a welcome part of my childhood, it seemed a fantasy world that a 30-year-old corporate lawyer should not be interested in revisiting. Or so I thought. After moving to London, I had the opportunity to see Harry Potter and the Cursed Child Parts 1 and 2, spending a full six hours in a darkened theatre, immersed in the magical world of my childhood. The experience was revelatory. The play is imperfect, with plot holes, predictable narrative twists and the occasional banal line of dialogue but, in its totality, Harry Potter and the Cursed Child is one of the most enthralling theatre experiences that I have ever had and, perhaps most importantly, it reminded me of why I fell in love with Harry Potter nearly 20 years ago.

I went into Cursed Child knowing nothing of the plot, and, in the spirit of “keeping the secrets” for those who will experience Cursed Child for the first time when it comes to New York next year or in London in the upcoming years, I will endeavor to spoil nothing of great consequence.* Sufficed to say, Cursed Child takes place as Harry, Ron, Hermione and Draco are approaching their 40s, just as young Albus Severus Potter, Harry and Ginny’s second child, is starting his first year at Hogwarts. Living in his father’s shadow and concerned that he will never live up to the Potter name, Albus traverses the same complexities of adolescent life that his father once navigated, from making friends to tackling school educational challenges, but he also struggles to connect with his famous father. When Harry’s past collides with Albus’ present, the results prove potentially catastrophic for the entire wizarding world and history as we know it. While there are gripping moments of danger and heroism in the show, Cursed Child, at its core, explores the same themes that underlay the entire Harry Potter series – the importance of friendship, the notion that everyone has talents and qualities that make them both unique and important and the truth that people are complicated – we grow and change and rarely (if ever) fit within a single label such as “brave,” “loyal,” “intelligent” or “cunning.”

Some flaws of the Cursed Child will be more frustrating to Harry Potter fans while other flaws are failures of narrative that will be readily apparent to any theatre-goer. While there are twists and turns in the plot that are sure to keep audiences engaged, the “big revelation” regarding the villain of the play should come as no shock to most patrons – there are more than enough hints and holes to piece the oncoming storyline together from very early in Part 1 of the play. Moreover, to help the Muggles in the audience who have never read a Potter book or seen a Potter film, there are moments in Part 1 that are exposition laden, which proves cumbersome.

Disappointingly, several prominent characters from the Harry Potter universe fail to earn even an acknowledgment in the play, and one much-loved character is repeatedly discussed but never appears on stage. While I appreciate the complexity of introducing too many characters into a stage production, some of these absences are curious given that there are moments in the show when including such characters would have made the plot more dynamic and reduced the need to explain backstory.** In addition to these absences, some audience members sitting near me complained that numerous characterizations – including those of Harry, Ron and Hermione – are not in line with the books. To this I say, people change as they grow older. At 30, I am very different from my 17-year-old self, and to expect a 37-year-old Harry Potter to behave and talk as he did at 17 is to ignore the realities of time and human development. That said, there are moments, especially with respect to Ron Weasley, when the playwrights fail their characters. Ron is given minimal if any heavy lifting in the plot of Cursed Child and seems stuck in a childlike state of platitudes and unease. The traits of Ron Weasley that made him an important part of the trio- including being a confidant for Harry, a loyal pal, and an interjection of levity in tense situations- are nearly nonexistent in in play, leaving the character with no real purpose in many scenes other than to interject awkward and unnecessary dialogue. Ron deserves better.

But these critiques are minor (and perhaps to be expected from an opinionated book lover and Potter fan like me) when the artistry of the Cursed Child is examined as a whole.

What distinguishes Cursed Child from other stage plays is its magic. Not just literal slight of hand and entrancing special effects, but the design and music that create a magical atmosphere, invigorating the performance space with the spirit of the wizarding world. Christine Jones’ set design is not complex, but it allows for fast-paced transitions between locations, which is vital in this play, and features recognizable pieces of Potter-lore such as moving staircases, bookshelves, train platforms, and a Forbidden Forest. To whom the delightful puppetry work in Cursed Child can be attributed, I know not (perhaps Christine Jones, Illusions and Magic supervisor Jamie Harrison, Special Effects coordinator Jeremy Chernick, costume designer Katrina Lindsay, or the properties duo of Lisa Buckley and Mary Halliday – likely some combination thereof), but there is nothing quite like being surrounded by ominous floating Dementors or to see a Patronus move across the stage. However, there are two design elements of Cursed Child that particularly elevate the production – the music and the illusions. Imogen Heap has composed a palpable score that features prominently such that this “play with music” feels like a motion picture at times. The immersive music successfully carries the audience along with tonal shifts in the plot and jolts them back into the world of Harry Potter after intermissions and between Part 1 and Part 2.

A Harry Potter play without magic is unthinkable, and Jamie Harrison does not disappoint. Slight of hand illusions allow Harry to pluck an owl-dropped note out of thin air, brooms rise, spells jettison from wands, sparks fly in epic battles, a sneaky trio of students enter the Ministry of Magic through a telephone, polyjuice potions transform actors in front of the audience, and Draco and Harry face off in a humorous dual that sends both men hurtling through the air. On film, these magical moments require a bit of digital artistry and a green screen. But the “real” magic of Cursed Child, without the crutch of digital manipulation, is entrancing and grin-inducing no matter what your age. Even when the illusions are slightly off in timing (a product of doing so many shows – not every trick is bound to work every night), the sheer fact that they are occurring live on stage is thrilling.

The ensemble of Cursed Child does an admirable job of bringing well-known witches and wizards to life, with several notable standouts. Jamie Glover simultaneously conveys the insecurity and emotional struggle that Harry Potter faced in his adolescence while also bringing an enlightened maturity to the role, which would come with age. His performance highlights Harry Potter’s many flaws while still making the character likable and a man with whom anyone can identify. James Howard’s performance as Draco Malfoy is perhaps the most transformative when compared to his book counterpart. Sharp-tongued, authoritative, caring and sympathetic, Howard’s take on Draco reveals complex emotional layers of a character that is often considered little more than a bully. However, it is Samuel Blenkin as young Scorpius Malfoy who steals the show. With appreciable comedic timing, a pre-pubescent voice and heart-wrenching displays of vulnerability and loneliness, Blenkin’s Scorpius is the consummate outsider who strives for acceptance and, despite being ostracized and often afraid, demonstrates an enviable amount of loyalty and bravery in the most difficult of circumstances. Overall, Blenkin does a nice job of crafting nuances of character.

Although imperfect, Harry Potter and the Cursed Child Parts 1 and 2 is an admirable attempt to revitalize the world of Harry Potter in a new medium and, in many ways, manages to capture the wonder and themes of the books. While some may struggle with the nearly six hour runtime, there are enough breathtaking battles, touching realizations and jaunts through Potter history to keep audiences spellbound and bewitched. As for me – I think that it may be time to dust off the books on my bottom shelf for a little late night reading.

*My twin sister managed to spoil two high profile Potter deaths for me nearly 15 years ago, and I still have not forgiven her.

** As the age old critique of writing goes – show me, don’t tell me.