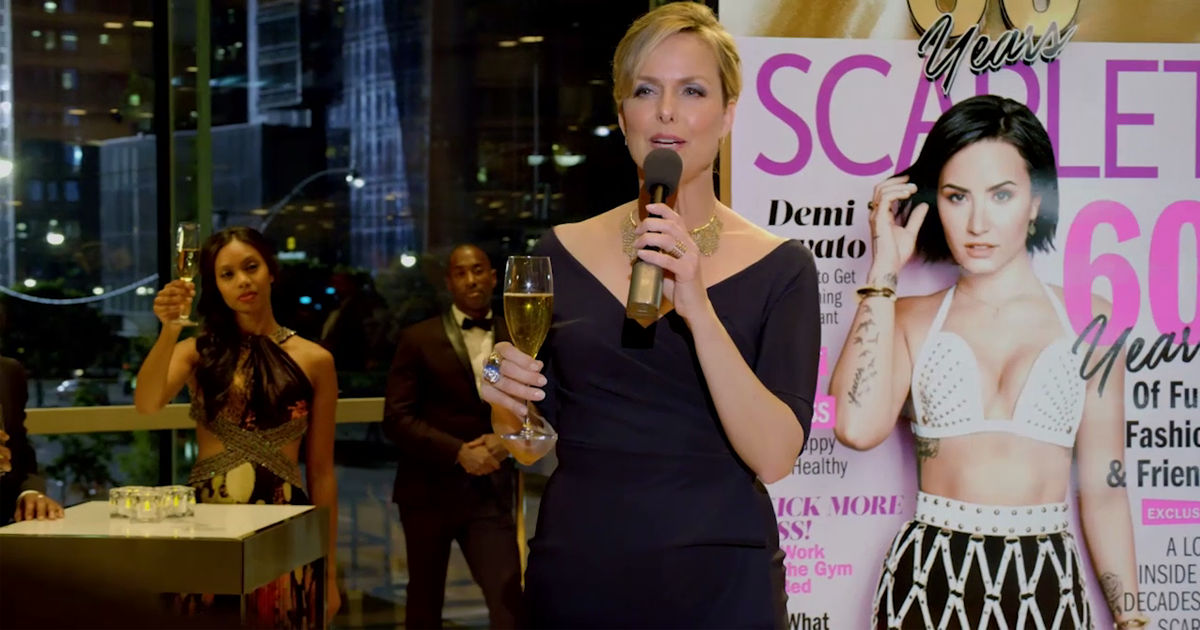 The Virtue of a Bold Type

Melora Hardin is always in charge. Known as the hard-ass from corporate always squashing the Scranton Office hijinks, Sarah Pfefferman’s uncompromising ex on Transparent, and the high-end event planner keeping Brian Austin Green’s Wedding Band in line, Hardin has made a career as an authority figure who says no to pretty much everything and never lets anyone in.

On Freeform’s new summer hit The Bold Type, Hardin once again finds herself in a power position. She’s Jacqueline Carlyle, the editor-in-chief of Scarlett- the world’s leading women’s magazine (a stand-in for Cosmopolitan). She’s tough, she’s outspoken, she’s smart and efficient and doesn’t tolerate nonsense- she’s played by Melora Hardin after all. But Jacqueline isn’t Jan, or Tammy, or even Roxie. She’s based on executive producer Joanna Coles and, despite not being the main character, she’s the reason The Bold Type exists, she embodies its tone and raison d’être.

It would have been very easy to make Jacqueline into Miranda Priestly– a cold, hardline boss who scares her staff into subservience and is only revealed to be human in the most fundamental of ways because Meryl Streep can’t not humanize her characters. The show addresses the ways in which Jacqueline has had to bow and scrape and push and scramble (and put up with unimaginable shit) to gain respect in a male-dominated field, but The Bold Type isn’t interested in the argument that for a woman to succeed she has to abandon traditionally feminine qualities like empathy and patience. The Bold Type loves women. It’s the sort of unapologetically feminist show that’s far beyond women-in-pants equality, arguing instead that there’s strength in femininity and power in embracing female culture to whatever extent it suits you.

Jacqueline leads by example, listens to her employees, supports ambition, champions the young women starting out at Scarlett, and doesn’t have to sacrifice everything to do those things. The show doesn’t ignore the fact that “having it all” without losing a little is a toxic myth but so too it doesn’t suggest, like so many narratives about succesful women do, that Jacqueline’s career had to come at the expense of having a family and a functional relationship. She has all those things. Sure, she may have to take a call from the sidelines of her son’s basketball game, but she’s going to be at that basketball game. And in an age when Teen Vogue is on the frontlines of clear-eyed journalism, the ideas articulated by Jacqueline about Scarlett’s value ring thoughtfully true: a narrative shift towards self value- reflected in “please yourself” rather than “please your man” pieces and beauty tips that embrace diversity and downplay male-gaze standards of perfection- combined with social and political articles that acknowledge that young women should and do care about more than beauty and romance.

The actual stars of The Bold Type are Jacqueline’s protégés (played by Katie Stevens, Aisha Dee and Meghann Fahy)- three smart, driven, conflicted, a little immature but totally impressive, self-possessed, rash, sex-positive, articulate, romantic, goofy, sometimes selfish, impeccably dressed young women who met working as assistants and are now starting to rise through the ranks at the magazine. Their stories are about professional ambition and personal consequences, what it is to be a young woman in 2017, the joys and woes of millennial confidence and, ultimately, everything boils down to the importance of friendship- which sounds trite but, considering how many decades it’s taken creators to finally start writing healthy female friendship, it’s damn near revolutionary.

Most things on this show have that feeling- seemingly trite but sneakily important, entertaining above all. Creator Sarah Watson made her name on mainstream network shows with underrated honesty like Parenthood and About A Boy (she won the MyTV Award back in 2012 for my favourite episode of Parenthood) so she’s remarkably adept at balancing a charming, digestible tone with medium-heavy themes and strong character storytelling. A good in-house analogy for The Bold Type‘s MO is Jane’s first political article (the reporter in the main trio, Stevens’ character is ostensibly the series lead though Dee and Fahy get in plenty of punches). When a political rising star refuses to give a quote about anything more substantial than her clothing choices because Jane is representing a magazine she doesn’t associate with depth or intelligence, Jane leans in where she can get in and writes an illuminating piece about how the congresswoman uses fashion (and the media’s fascinating with it) to support or distract from her legislative maneuvers. The Bold Type does the same thing, telling clever workplace stories that speak to the challenges faced by ambitious women and swoony romance stories that subtly subvert unhelpfully ingrained notions like bi erasure, the monogamy myth, and what male-female power dynamics are supposed to look like. It’s all very fun in a ‘heaps of sugar help the medicine go down’ kind of way.

The show’s biggest flaw is its men, which, as far as flaws go, is a pretty tolerable one. The 10-episode first season was so (rightly) focused on the development of the female characters that their male peers were essentially just pieces of meat. Television and film have a storied tradition of female characters who exist entirely to fall in love with the lead and/or make him better at his job so there’s an amusing sense of purposeful rebellion to the one-note identities of amiable co-worker Alex, dashing board member Richard, and smooth-talking bad boy Pinstripe (his name’s Ryan but our heroes call him Pinstripe after the men’s magazine he writes for, like “Mr. Big” but without the creepy power issues). It’s a philosophically valuable weakness but it’s a weakness nonetheless and hopefully future seasons will make room for a full cast of characters who are compelling for their humanity, not just for their one-liners and abs (I would also prefer love interests who weren’t an average of 10 years older than the female leads, but one mountain at a time I suppose). It’s very possible this wouldn’t bother me if all the men were played by mere generically charming hotties (as written, they certainly could be) but someone went and hired Dan Jeannotte to play Pinstripe and it hurts my heart that it’s very possible to watch The Bold Type and mistake one of the smartest and funniest sketch/improv artists in the country for a generically charming hottie. In season two he should be a) promoted to series regular and b) given something to do that stretches more muscles than his biceps and smile. But, again, I’m ultimately pretty okay with the fact that the lowest priority on the to-do list in season one was the development of the male characters, the producers had more important issues to address.

I’m not arguing that The Bold Type is great television. It’s ambitious but still somewhat unsophisticated, stylish but a little over-dressed. It belongs on Freeform where the right audience has to search to find it and it doesn’t have to be a smash to survive; it belongs in the summer where it can play alongside similar delights like TVLand’s Younger rather than competing with the mediocrities of Shondaland that have a strangle-hold on the demographic The Bold Type is after. But I loved the first season, its unapologetic femininity and honest acknowledgment that dark themes and fun times don’t conveniently live in separate boxes, nor do smart topics and frivolous ones. It feels as though Watson and her staff were prepared for the fact that they likely wouldn’t be taken all that seriously (#LadyProblems) but they didn’t bend to that problem by tamping down romance plots or not letting their female characters discuss things smart adult women do actually talk about but aren’t allowed to on TV shows about “smart adult women” (lipstick, orgasms, handsome singer/songwriters). There’s nothing weak about women (or traditionally womanly things, as long as they’re voluntary) and there’s nothing dumb about a TV show that focuses squarely on them, even if it’s brightly coloured and easy to watch. The Bold Type knows exactly what it is, and knows exactly what that means, but it’s relentlessly itself anyway; we should all be so bold.