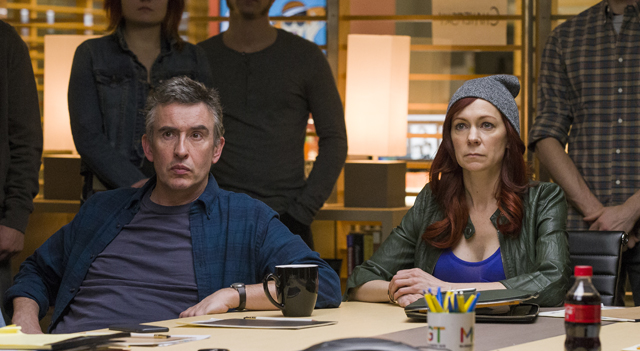 Two shows hit TV this year that had a lot to say about Millenials. Both of these shows have creators and lead characters who reside firmly in Generation X, they just have thoughts and feelings about the younger folk that they really needed to share.

The more annoying of the two is Happyish, a whiney Showtime comedy that squanders an absolutely phenomenal cast (in order of brilliance: Kathryn Hahn, Steve Coogan, Molly Price, Ellen Barkin, Bradley Whitford, Carrie Preston- just for starters) playing characters with wonderful lives who are absolutely determined to hate everything and everyone, especially the soulless, useless, corrupted, corrupting younger generation. One of the show’s favourite jokes is that everyone is on antidepressants, but any real consideration of the epidemic of mental illness currently sweeping through an entire generation of young people is avoided at all costs.

Steve Coogan’s absurdly self-righteous advertising exec spends the entire first season complaining about his job and wishing he were writing a novel while lambasting the admittedly wacky upstarts who embrace the dark realities of a stable industry. His wife, meanwhile, is one of those rare unicorns who is able to make a full-time job of honest to god art. Her stories are actually the most interesting in the series- she’s consistently considered a stay-at-home mom by the PTA and it becomes increasingly impossible for her to get any work done when her “work” is condescendingly not considered real work. But, while those complaints are more than fair (as is her season-best storyline involving returning a gift for her son from her manipulative mother), it becomes increasingly aggravating watching a woman with a great kid, a really enviable relationship with her husband and enough financial security to do what she loves for a living doing nothing but complaining that her life is horrible.

What’s most bizarre about Happyish is that it seems to be completely unaware of its overwhelming hypocrisy. It’s not a bold glimpse at the sort of crippling depression that prevents happiness when there’s no reason for its absence, nor is it really a critical deconstruction of a generation that lives in fear of the generation behind them. It feels more like a show that exists mostly so that its creators can gripe about all the little things that make them unhappy (namely youngfolk) when the real thing making them unhappy is their insistence on griping.

The far more enjoyable show is Younger, in which a member of Generation X (Sutton Foster) improbably poses as a Millenial in order to re-enter the workforce after nearly 20 years as a stay-at-home mom. The writing is fun, the supporting cast fantastic (Debi Mazar! Nico Tortorella! Miriam Shor! Molly Bernard! Kathy Najimi!) and Sutton Foster one of the most endearing leading ladies on TV so I consistently enjoyed Younger. Some of the generational observations are actually really funny and I wouldn’t mind the amusing culture clash if it weren’t for the not-so-subtle insistence that the older generation is the better one. Hilary Duff’s kind and capable Kelsey is refreshing but details like her living with her friend’s parents and sleeping with a married (Gen X) man feel like deliberate nods to the pervading “Millenials are entitled” narrative. The point is driven quite dramatically home the moment Foster’s character secures her entry-level publishing job over the real-Millenial applicants by answering the question “what makes you special” with “I’m a grown-up, I don’t think I’m special”. UGH.

I get how, in theory, the belief that you’re average at best and deserve to be treated as such might make you a good assistant/intern/general gopher but I’m starting to suspect that the Gen X obsession with telling us to stop considering ourselves special is really an effort (subconscious or otherwise) to keep us at the assistant/intern/general gopher level. I think someone who thinks they’re special will work hard to make sure their boss can see it too. Someone who thinks they’re special is more likely to share their ideas in a meeting or go after a promotion, try a bold new strategy or start their own company. I’ll never forget the Emmy acceptance speech when Tina Fey (a member of Gen X but a defining Millenial role model) thanked her parents for “somehow raising me to have confidence that is disproportionate with my looks and abilities”. According to Tina, she wasn’t special, but they made her feel like she was. So, instead of keeping her job at the YMCA or studying to become an accountant, she went to theatre school and took improv class and became Tina fucking Fey. Thank god Tina Fey isn’t a Millenial or that career-facilitating over-confident boldness might have been killed by the constant chorus of “humble yourselves!”.

I would say that the fear is that the upwardly mobile and overly confident young people in Younger threaten to become the amoral sellouts who are stealing all the jobs in Happyish but Younger’s complaint seems to have a lot to do with the idea that Millenials are afraid of hard work and refuse to settle for adult responsibility over following their passion while the Millenials in Happyish have the opposite problem- the product of a brutal economy, they’ve become morally compromised bottom line-bots with no secret desire to quit their job and write a novel. It’s as if no one can agree what’s wrong with us, they just know it’s Something.

Ultimately, Younger is able to show compassion for its young characters (Josh is particularly delightful) and manages to move swiftly past its childish resentments with sharp humour and indomitable charm. Happyish, however, remains infuriating. It’s buoyed by that killer cast and the occasional moment of searing insight (it almost always has something to do with Kathryn Hahn; could not be more obsessed with Kathryn Hahn) but I only have so much patience for being called soulless by a man with a perfect life who does nothing but whine.