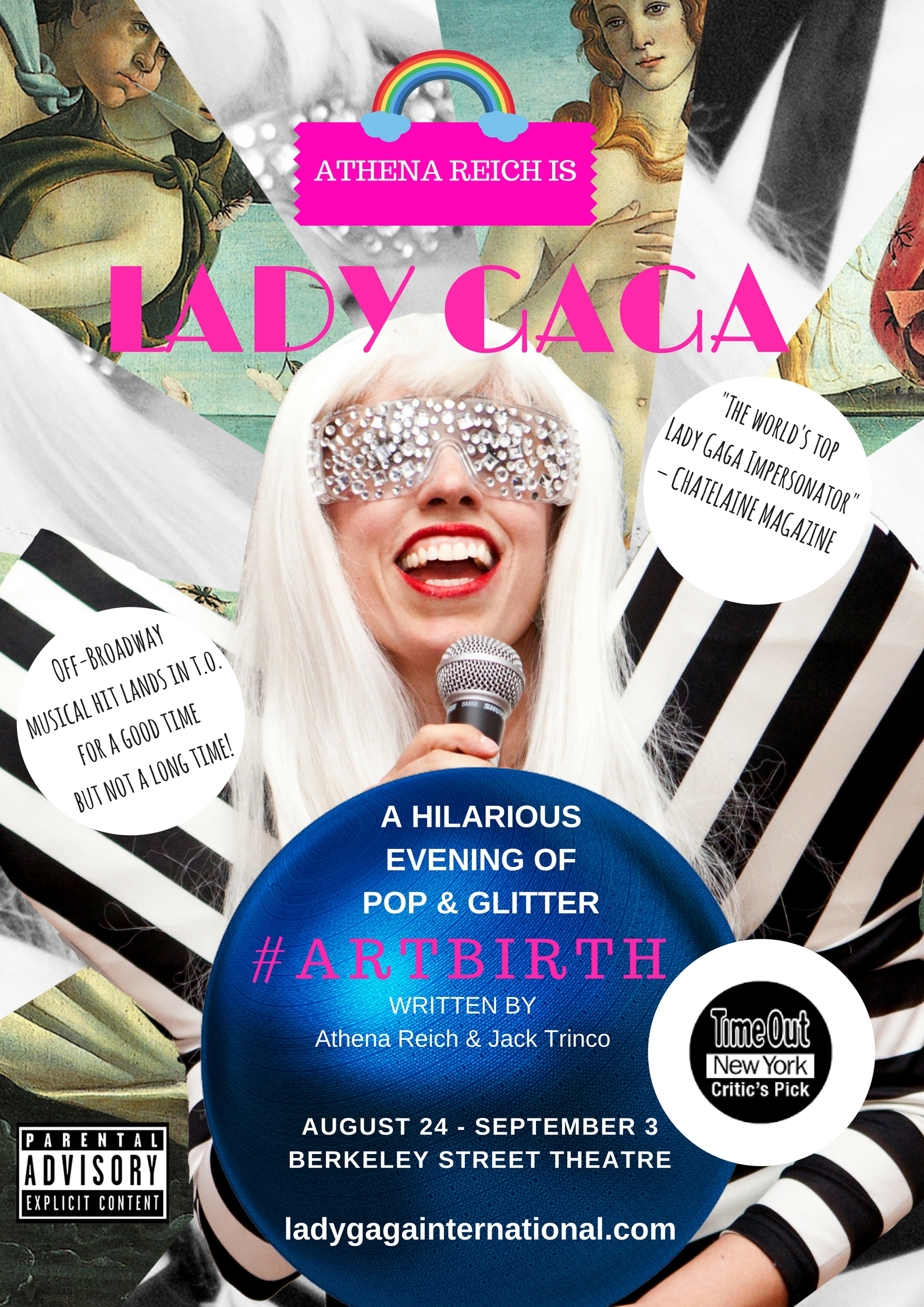 Athena Reich’s #ARTBIRTH was so unexpected, such a witty and subversive spectacle. Reich, as her pregnant Lady Gaga alter ego, drops a line early in the show warning us that this experience will transcend everything we think we know about music, theatre, and performance art… and it’s true. #ARTBIRTH is a parody, but it is also hyper real. I will admit that I have not done a deep dive into Lady Gaga fandom (#littlemonsters), however even I was able to pick up on the cultural references and appreciate Reich’s clever re-writing of Gaga’s hits. Oh, and Reich has performance chops, she is the top billing Lady Gaga impersonator for good reason. And if the above is not compelling enough, the women does a one-legged downward dog WHILE SINGING AND PLAYING THE PIANO… AND SHE STILL BELTS IT OUT just like Stefani Germanotta.

The conceit of the show being a comment on a comment, that is, Reich parodying Gaga who is often parodying important pop and contemporary art moments provides rich moments of fame culture critique disguised in seemingly vapid narrative. However, while the show is “about” Gaga over sharing her live-on-stage birth of the new Rock Messiah, references such as her costume matching Gaga’s #Artpop album cover or her joking of finally having the perfect placenta purse to go with her meat dress (also one upping Canadian conceptual artist Jana Sterbak) land well.

The first half of the show teases at a performance art revolution and you would be excused if the “live” birth she performed right before intermission, with the plethora of bodily fluids involved, was the climax of the show. However, the second half of the show provides a balm to the chaotic beginnings as Reiach demonstrates the confusion of postpartum symptoms and the shock that accompanies the shift in roles from pop star to mother. She moves through these less desirable moods quickly and comes to the conclusion that the strengths of new motherhood can be a boon, for what else but breastmilk can heal the world’s ailments? Lest that last statement confuse you, you need to spend only a short time in the mommy blog sphere to learn that breastmilk is lauded as treatment for everything from pink eye to the common cold. And here is where the show turns from being incredibly meta to hyper-real. In the most revolutionary act I have ever witnessed in art, Reich sprays her own breast milk around the stage, showering her (consenting) dancers in an awe inspiring celebration of life and spectacle.