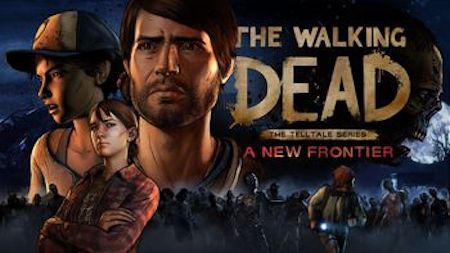 Micro-ReviewWalking Dead Season Three is a bit of a departure for the series, taking the focus off Clementine, who here plays a supporting role, and instead focusing on the Garcia family as they reconcile and uncover a conspiracy at the core of a community called the New Horizon in the town of Richmond. While it is disappointing at first to not be following Clem, the Garcias allow us a new angle into the series, as well as creating new dramas and potential for tragedy (I gasped aloud at the ending of episodes one and four which both feature shocking deaths). Like all Telltale games, the series suffers a bit in its third episode as a new status quo is established and new characters are introduced, but generally the game keeps up good momentum and stages some interesting challenges for players to overcome. Clem’s story also advances in an interesting way that I’ll go into below, but if you’re a fan of the series this is a can’t miss, particularly as the series finale approaches (though you may want to read a summary of the previous seasons, in case they’ve faded from memory a bit. Season Two had its stand-out moments, but I’ve largely forgotten it).

Overall, I’d say Season Three trumps Season Two, but fails to reach the high bar set by Season One, but for a Walking Dead fan its particularly worth exploring as it gives the player a chance to play out some familiar stories in another way (the game essentially places you in Shane’s shoes from the start of The Walking Dead, looking after your presumed dead brothers’ kids and wife). It’s an interesting story, well told as always, and sets up a great finale for Clem’s story in the series finale.

Other People’s Kids: How Season Three Clarifies the Over-Arching Theme of the Series

With the announcement that Telltale’s long-running Walking Dead series was coming to an end, I wanted to re-examine (and re-play) Season Three. The Walking Dead Season One was my introduction to Telltale Games in a big way and my journey with Lee and Clementine remains one of my favourite game experiences, as such one of the great benefits of the series is seeing how your choices play-out long term (which also presents some narrative challenges, as there are many variables for the writers to consider) and I was thrilled to see where Clem’s story went in Season Three. Clem felt oddly detached though, and upon completion I realized I hadn’t loaded my game file and had thus been playing a ‘blank’ Clem; some of the choices I’d made were ‘canonical’ but it was ultimately dissatisfying.

And so, with the final game of the series on the horizon, I wanted to remedy this and bring my Clem through to the final game and it was on this second playthrough and my need to have my version of the character for it that I realized the main, overarching theme of the series: raising someone else’s child. This was the initial set-up in the first game with Lee taking up care of Clementine as the two seek out her parents, but Season Two had us controlling Clem, meaning it felt more like a passing of the torch than gauging how you raised her. Season Three flips this on its head as once again, Clem is beyond our control (aside from flashbacks). Now, we get to see the kind of person we raised as Lee and shaped through player choices in Season Two. This is re-enforced by Javier and Kate’s journey as parents to Gabe and Mariana; Kate admits early on to being an unconventional and somewhat unprepared step-parent, and Javi is the legendary but absent uncle who suddenly finds himself trying to set a better example for the kids in his care. It’s an interesting mirror of Lee and Clementine from the first game, but where Lee knew from the onset that they’d never find Clem’s parents (and was essentially humouring her to help her cope), here Gabe and Mariana are already a part of Javier’s life and he has raised them for a few years. When Kate’s life is endangered from a gunshot wound, she puts it pretty bluntly: Gabe will either grow up to be like David or be like Javier, it’s up to you to determine how he grows. (It’s worth noting that Gabe is one of the most immeasurably annoying teenage characters to ever grace the gaming screen. His late game betrayal of you for saving his life is particularly aggravating). Regardless of your choices, Gabe opts to leave with David in the climax, leaving you with the decision to help Kate save the city or chase them; both times I chose to stay, as leaving with David sounded suicidal and having treated Gabe like an adult the whole game through, it felt disingenuous to chase him. He’d made his choice. If, like mine, Clem chooses to stay and help you, this leads to David and Gabe’s deaths, which hurt but are logical dramatically. And you still get the closure on your parenting: I teared up when a bitten and dying Gabe says, “You may not have been my father, but you were a great Dad. I love you.” Its good stuff and rewarding, in a tragic ‘it’s a Walking Dead story’ way.

Clem is the more interesting case, however: while the Garcia family’s story seems self-contained to this game (and likely as secondary characters in the next), Clem is our throughline and between my two games I saw small but vital difference to her character. In addition to getting more flashbacks based on your Season Two ending decision, the Clem of my save file was more recognizable to me: she warmed to groups, was hopeful, and believed in people. Most noticeably, this led to a rather tender kiss with Gabe before he died, that made a tonne of narrative sense and fit my version of the character. In a way, I felt like a proud parent: despite all the loss, my Clem still knew how to love. (Honestly, I think in my head I’ll always be Lee, watching from the beyond. He’s my entry point into the series and how I most identify with Clem. My version of her brings him up whenever she can.)

There’s also a rather brilliant scene in Episode Four where Javier plays a part in Clem’s growth, as she gets her period for the first time and doesn’t really understand what to do. Amongst all of the zombie business and life-or-death decisions, this small reminder that Clem started the series as a little girl and is growing up is a masterstroke. Similar to the now infamous moment of beauty in The Last of Us when Ellie sees a giraffe for the first time, this small, relatively inconsequential moment (in a Season Three narrative sense), will always be one of this Season’s most important. Javier is in no way a father figure, but instead a helpful friend and ally, who in-game as in-life help develop character as well. It’s a really powerful way to give Javier and Kate a lasting effect on Clem (who in my story also has promised to teach AJ euchre on Gabe’s behalf.)

For Clem’s part, in this game she has taken on the role of raising a child, baby AJ from Season Two. When we first encounter her, AJ is no where to be seen, but we later learn that he was taken from her when she was exiled from the New Horizon. While I appreciate not having Clem lugging a baby around for the whole game (Gabe is enough of a baby for everyone ever), this major plot point is unfortunately makes very little sense: AJ is sick, Clem steals medicine for him that she’s been told won’t help, she gets caught and David exiles her, but inexplicably takes the baby and says “You’ll be better off.” This, after a scene where he suggested they should have left the baby to die of exposure weeks ago. It makes no sense other than to punish Clem; it’s not even a ‘he’ll grow up to be one of us!’ scenario, as they all fully expect the baby to die. Then characters show up and tell Clem to move on and that she’s a ray of hope in the world. Moving on from being kicked out of the group wasn’t the problem, lady. STEALING MY FUCKING BABY WAS. This all serves to set up Clem and David as adversaries, though he later admits he raised AJ before sending him to live where he’d be safe, but the reasoning is still bonkers. AJ, meanwhile, has given Clem a driving purpose other than ‘survive’, which is nice and the quest to find him has been set up as the grand finale to the series.

And so, we have many, many instances of people taking on the challenge of raising other peoples’ kids, with the greatest of all being the player themselves who is ultimately parenting Telltale’s baby: I didn’t love my ‘clean game file’ Clem, who ended as a ‘Reformed Loner’, I did and do love my game file’s Clem, who stands ‘Strong Through Solidarity’. It’s what I taught her, how I played her, and it was nice to see her behave in kind.

Walking Dead: Season Three has a bunch of issues, from inconsistent characterization, to rehashing some familiar scenarios from previous games, to the fundamental flaw of why baby AJ was taken, but taken as a greater part of the series, it serves a vital function as we move into the endgame (literally and figuratively): it confirms the series’ central theme, explores it intelligently, and helps us understand what it all means. Many of our choices are wiped away, game-to-game, but how we chose to teach Clem and live as her, says a lot about how we parent in the zombie apocalypse; just as our choices as Javier do in Season Three. Now that we no longer control him, I’ll be curious to see what his version of the city is and who his kids with Kate turn out to be.

But I’ll be more curious to see who AJ, co-parented by Clem, David, and who knows who else, has grown up to be.