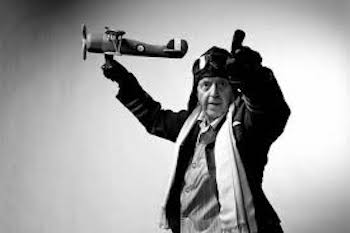 Eric Peterson is back once again performing Billy Bishop – a Canadian war hero from the First World War. Forty years since its creation, this production celebrates not just Peterson and Maclachlan Gray’s creation, but brings Soulpepper through Canada’s own 150th birthday.

The set stands out immediately as interesting and effective: around the stage set pieces and props are covered over with sheets as they might be in a storage room or an attic, and the audience begins to wonder what must be under each one.

As Bishop, Peterson’s performance only hits a few notes, and I found myself wishing that he would somehow define him more, to evoke more emotional depth and nuance. Peterson is at his best when portraying the secondary characters, and the energy and detail with which he portrays a Scottish former officer, a sultry lounge performer, and the King of England is striking. Peterson and Maclachlan Gray’s chemistry is vibrant, nicely balancing the one-man show with a vaudevillian-vibe that helps to provide dimension and atmosphere to Bishop’s story.

From what we learn about Bishop, it might just be difficult to portray him as striking. As it is, Bishop comes off part hapless, part obstinate, and entirely lacking in self-possession. This is a man who, for most of the show, has his life happen to him. This show tells the story of a young man attempting to avoid failure, only to fall into success accidentally over and over again. He gets caught cheating, and branded as ‘hopeless’, and so enters the Royal Military Academy. When he signs up for the war, he’s told that he can avoid combat risk by becoming a pilot (or, initially, an ‘observer’). He eventually becomes a pilot, because, well, it’s wartime and people keep dying. As a pilot he’s successful as the result of persistence, luck, and bloody-minded determination. Eventually we see him pursue conflict head-on when he takes on a German base single-handedly, after which he’s relieved of his wartime duties and donned with more medals than even many of the British officers.

What’s striking about this show is the fact that Bishop is not a hero in the traditional sense. His story is a combination of bravery, a lot of cowardice, and a whole lot of luck. And I cannot help but think that this is, somehow, both incredibly appropriate and inappropriate as a Canada 150 Celebration production. It is, in a sense, what our country is built on: white people stumbling their way into success and being celebrated for it. Don’t get me wrong: watching Peterson and Maclachlan Gray perform on stage is delightful, and without a doubt the play itself is prominent within the Canadian theatre canon. And so I left the performance with two distinct and parallel feelings of delight and dissatisfaction at Soulpepper’s particular choice. Earlier, in the lobby, I had glanced at the poster for the upcoming season, and while it has some exciting stuff (Edward Albee! Samuel Beckett!) – there is no denying its overwhelming whiteness. No doubt everyone is tired of hearing complaints about the dominance of white men, but there’s a reason it needs to be a persistent topic, which is that this dominance is so easily perpetuated. In a time when we, as Canadians, might want to reflect on who we are politically and personally, what we need is more diversity within storytelling, not less. Art plays a huge role in our imaginative, empathetic, and ultimately our political lives. It allows us to acknowledge stories that might be things we are not just proud of as a nation, but things we are ashamed of, things we have to reckon with. Bishop learns to stop running from his fear of failure, and it’s a lesson we might want to reflect on, and one we might want, as he did, to put into practice.