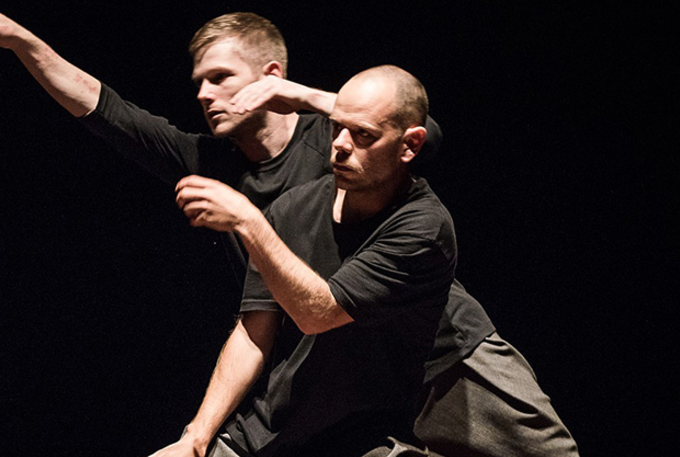 Sharing the space with 64 custom designed (Macindoe) percussion machines, choreographer/director/performer Antony Hamilton and designer/performer Alisdair Macindoe are charming, displaying an articulate and humorous movement vocabulary that only occasionally gets overshadowed by their accompaniment. As the show continues it is not always clear if the soundscape is accompanying the dancers, or the other way around.

The performers begin moving encircled by 64 devices—each a small wooden box with a pencil attached, the metal bit on the eraser end tapping rhythmically on the marley stage floor—a device so simple yet effective that it often pulled focus. Indeed, before the show was over, Hamilton and Macindoe had already discreetly left the stage leaving us to enjoy a riveting percussion concert on our own.

Hamilton and Macindoe move with clockwork precision, the movement style I would describe as a soft popping, the overall vocabulary reminiscent of both contemporary and hip hop styles (including some beatboxing), without really being either. They push physical ideas to the extreme, the result often absurdly funny.

Before they exit the stage, Hamilton and Macindoe stop to watch the machines with us, we experience together the rhythmic grace of these tiny percussive instruments that seem to have taken on a life of their own. Much like a study of “object-oriented ontology” (a philosophical study of existence that considers things as equal importance to living creatures—and the relationship between the two). Meeting highlights the relationship between the dancers bodies and the percussion machines, eventually allowing the object and not the dancer to command the space.

Endings is a wrenching piece of theatre. Formed around personal interviews on the subject of illness, death and loss, the show revolves around intimate reflections on the universal yet taboo topic of death. Making use of fluorescent lighting, turntables and reel-to-reel players on stage, the set feels both futuristic and nostalgic. Tamara Saulwick (concept, text and performance) holds it all together with a compelling performance as she embodies the voices and experiences of the recorded interviews.

The first half of the show feels to me like a warm-up for the latter portion. The soundscape reminiscent of an old-time radio broadcast while the stage dressing suggests futuristic space station (Peter Knight and Ben Cobham). The recounting of personal histories can be heard in fragments and this builds a sense of mortality and uncertainty.

The show culminates with a seance scene, the use of mid-century sound equipment in the background harking back to the technology and tricks used in Victorian era seances to dupe the hopeful loved ones of the recently deceased. This scene transitions as Saulwick depicts a demonic presence that was as entrancing as it was terrifying to experience. My first read on this scene found it a bit tongue-in-cheek (related to the seance and the idea of being careful what you wish for), but with more reflection I think the inner demons that one wrestles with while moving through deep grief were well represented.

The demon scene ended with the use of a strobe light and a loud vibration that shook the theatre, it was uncomfortable to experience but cathartic to be released from.

This work is an ethnographic study about the experience of understanding grief and death, full of the stories about loss and transcendence that we don’t normally talk about. I was deeply touched by the candidness of the personal stories being shared, how it is that we seek to understand the experience of “the sense of life leaving…” the bodies of our loved ones.

The Canadian Stage Spotlight Festival is a biennial event, this year shining a light on prolific Australian artists. The festival runs from March 29 to May 7, 2017.