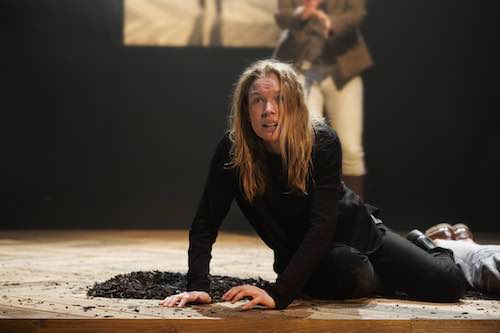 Why Not Theatre’s Prince Hamlet is currently being remounted at the Theatre Centre. Though to say remounted is misleading: adapted from Shakepeare’s Hamlet by Ravi Jain, the script is similar to the original from ten years ago, and still has Jain directing, but the production itself is composed of an entirely new team of artists, and is the product of a very different directorial approach from the original.

One of the most obvious changes is the cross-gender casting (with the notable exceptions of Claudius and Gertrude), with Christine Horne as Hamlet, Jeff Ho as Ophelia, and Dawn Jani Birley as Horatio. Birley is also a deaf artist, and signs throughout the entire production. In fact, the players come out at the beginning, line up on the stage, introduce themselves as the players and sign their real names for the audience.

At this point, it’s already obvious that this production is doing a lot. Part of this can be attributed to Why Not Theatre’s mandate, which is to expand not just how stories are told (demonstrated in Jain’s re-envisioning of the structure of Shakespeare’s play) but also who gets to tell them.

The ways that these two directorial choices link up with the themes of the play are interesting. Hamlet turns, in part, on how we tell stories, whose version of the story is taken up, and the consequences that has on those around us. Beyond this there’s how our identity informs the meaning of the story: is Hamlet simply having delusions, or does his grief allow him to see more than others?

The play also deals with questions of role-playing, something that the production consciously foregrounds when the actors come out and introduce themselves. This is also emphasized by the stark set comprised of a single raised flat in the centre of the stage, surrounded by piles of dirt, with the actors not in play sitting around the edge of the room just out of the light. This flattening out of the set allows for a lot of flexibility, but it makes the job of the actors even harder in terms of reflecting their environment, and meant that I never really got immersed in the action of the play. But, perhaps that was the point.

The cross-gender casting further contributes to this theme of performativity in really interesting ways. Horne’s Hamlet is oddly satisfying to watch, as a woman. It’s such an iconic role for male actors, and to see a woman play it is empowering. It’s hard not to compare the role to everyone else you’ve seen play Hamlet, but in this case, Horne’s performance is distinct and refreshing. It’s a role that is often taken so seriously that it’s not uncommon to see people play it with a lot of weight. Horne, on the other hand, really hits the mark with a few lighter notes, not least when Hamlet is messing with some of the other characters. There’s a kind of- for lack of a better word- sassiness to her Hamlet that makes sense of the role in a new way, and her execution makes it clear when Hamlet is being authentic and when he is using people’s impressions that he’s crazy in order to manipulate them.

Casting Ophelia as a man is an interesting but more complicated decision. Ophelia as a character really only makes sense as a woman – the play is driven in part by misogyny, and Ophelia’s mental breakdown is driven by the ways in which she cannot simultaneously play all the roles demanded of her: sister, daughter, and lover. This production walks a line that I’m still unsure of. Ophelia is still a woman even though she’s played by a man, and Ho’s performance of her vulnerability is at times moving and at other times uncanny or grotesque. The complication is that in this case Ho’s job is to perform gender on top of (or perhaps even more so than) performing the role, something which can seem compelling at times and cartoonish at others. Yet the discomfort in watching him I think ultimately fits the meaning of what’s happening to Ophelia, and so instead of subverting it, the casting amplifies the tragedy of her narrative. It also connects to yet another question in the play, about how the ways we experience stories reveal to us something about our own experience of the world, and of ourselves. This theme is also literally reflected back to us in the set, by a series of mirrors mounted on the back wall that the actors use to play with the direction of the staging.

Overall, the acting is strong and connected, and Birley’s signing and movement add a visceral element that contrasts with a lot of the more cerebral choices in the play. Though I did not find myself moved by the overall story as a whole so much as interested in many different individual parts, there are more than enough insightful choices and moments and questions here to make this a production well worth seeing.