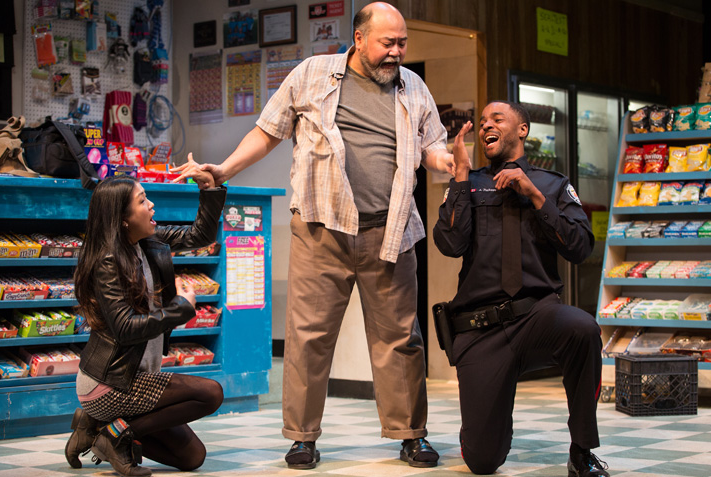 Kim’s Convenience, Back on Stage at Soulpepper

At this point, Kim’s Convenience hardly needs an introduction. Having toured nationally, with multiple remounts, and having been turned into a CBC series (it’s just been renewed for a second season), this summer Ins Choi’s play will head to New York City for its U. S. Premiere. But for now, it’s back at Soulpepper.

The play begins with Mr. Kim (Paul Sun-Hyung Lee) opening his store, Kim’s Convenience. He whistles as he moves through the stage, prepping his stock and preparing for the day. As the story progresses, however, we learn that the Kims have a fractured past; that Jung (Richard Lee) fought with his father years ago and, after a physical altercation, stole money from his parents and fled. The story is about a family trying to come to terms with itself, which mostly means Mr. Kim coming to terms with the reasons he moved his family to Canada in the first place, and what it means that the very freedom he sought for them allowed them to develop different interests and goals which now threaten not only the very store that helped support the family for years, but also Mr. Kim’s legacy.

The show spawned the CBC comedy of the same name, and the play’s style is, unsurprisingly, that of a sitcom, about which I have mixed feelings. On the one hand, the show extracts laughter from the audience (myself included): it is funny, there are consistent jokes and physical humour. And yet, there are things about this show that don’t quite work for me. One scene in particular stands out at the beginning, when Mr. Kim suspects a black customer (never named in the show itself but listed as ‘Mike’ in the programme) of stealing, giving his daughter a lecture about the way to identify thieves by their demographic and personal style. There are two kinds of customers in Mr. Kim’s world: ‘steal’ and ‘no steal’. His daughter listens to his speech, aghast, and accuses her father of racism. When he comes back to the front, Mr. Kim refuses to give Mike his change until he puts back what he stole. Mike seems appalled, and refuses to dignify Mr. Kim’s accusations. Moments later, holding Mike in an arm lock, Mr. Kim extracts his property in a vindicating swoop – he was right, after all.

This scene is somewhat uncomfortable. There is a difference, to be sure, between depicting racism and endorsing it. Mr. Kim is being depicted as racist, something that his daughter explicitly calls out, drawing attention to it as a problem. But, then when his racism is vindicated, the scene reverses itself, implying that his racism is not just a function of his life experience but is also inherently justified.

That aside, there is an interesting tension in this play more generally. It’s the story of an immigrant family who is reckoning with its internal fragmentation while also trying to be a sitcom, with stock characters and jokes engineered to garner laughter consistently throughout the performance. Throughout the course of the play Mr. Kim confronts the unfathomable (to him) desire of his daughter to be a photographer, his guilt, sadness, and anger at his son for leaving the family, and his own legacy and what it even means to him to be successful. He starts the play by trying to bully Janet into taking over the store, and her resistance both gives us a sense of Mr. Kim as a father and also provides a lot of stock comedy for the audience. By the end, (*spoiler alert*) Mr. Kim offers the store to his son in a gesture of both forgiveness and reconciliation. In short, Mr. Kim goes on quite an emotional journey in this show, a journey that I’m not sure is entirely serviced by the superficial comedy style in which the show is presented. Mr. Kim’s emotional reversal seems a bit too easy, and it’s unclear if that is a function of the writing or the direction, or perhaps a bit of both.

As for the performances- Rosie Simon is endearing as Janet, the Kims’ daughter. Ronnie Rowe Jr.’s performance runs the gamut as he plays a teenager, a thief, a lawyer, and a police officer/love interest of Janet, and while Rowe is obviously versatile as a comedy actor, his physicality as the cop could use some work. Jean Yoon as Umma, Mr. Kim’s wife, is by far the best performer of the piece, even though we see the least of her, and her ability to shift between her younger and older selves by shifting her body and her expressions alone is impressive.

Finally, there is something about the style of the show related to but which goes beyond the comedy that I found mildly unsettling. Perhaps the best way to describe it is that this show seems to be playing a Korean family for a white audience. I was laughing along with the rest of the theatre but there was something uncomfortable in that experience, something that felt vaguely exploitative.

And perhaps this is, in part, my own discomfort with race and racialized stereotypes as a white person. That could certainly be part of it. But on the whole, I wonder what this show would be like if it had slightly different direction. If, with the same writing, instead of playing for the laughs, if instead of very self-consciously playing the stereotype, it went instead for more sincerity. If the action were more grounded, if Mr. Kim didn’t seem to be so aware of how funny he is but instead play from a place of intention and authenticity, I suspect this might dissolve some of the tension between the highly stylized comedy and the genuine emotional journey underneath it, bringing more nuance and unity to the piece.