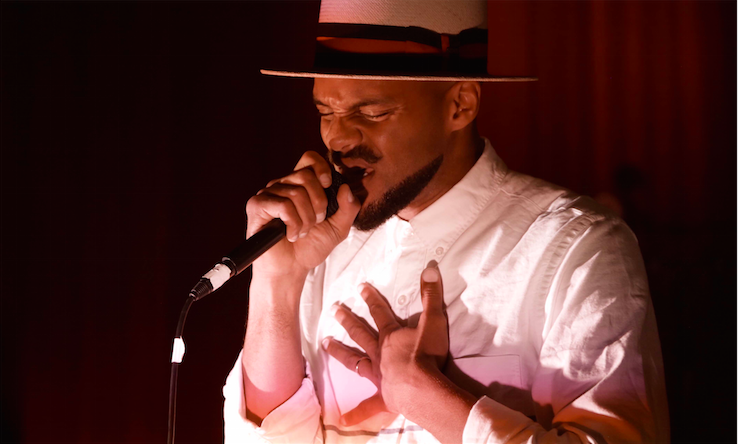 Created by Khari Wendell McClelland, Freedom Singer is a gorgeous, thrilling, and refreshing theatre experience. The show is launching the Scotiabank Community Studio space at Streetcar Crowsnest Theatre in Toronto, and will be going on a cross-Canada tour throughout February (Black History Month).

Juno-nominated singer-songwriter McClelland narrates his search to find out what he can about his great, great, great grandmother, Kizzie, who escaped slavery via the Underground Railroad, making her way to Canada and then, eventually, down to Detroit.

The history of the Underground Railroad is foggy at best, since the history isn’t well documented. Instead, McClelland tries to piece together family narratives that have been passed down to him, and the rare scraps of recorded history that he can discover between Ontario and Nova Scotia.

In his search he also becomes interested in piecing together the songs of Kizzie’s time, the songs that she and others would have sung to keep them motivated during their escape and their attempt to survive harsh conditions. Oppressed people sang in code, he reminds us, using lyric and poetry and metaphor to stand in for darker, hidden realities but also hidden hopes and dreams and resilience.

The songs punctuate the narrative, and are both beautiful (McClelland and Tanika Charles perform the songs, along with the guitar stylings of Noah Walker) and poignant recreations of ghosts both personal and social. In between the songs, he narrates and, at times, re-enacts conversations he had with his mother, with librarians, historians, and museum curators. One of the most memorable scenes in the play is when McClelland is speaking over the phone with a librarian offering to help him with his research. McClelland mentions how searching for Kizzie has lead him to want to discover and recreate these songs. There is a long pause, and the librarian finally responds “… right”, while McClelland looks out at the audience, unimpressed. The moment is both unsettling and funny for the same reason: the librarian doesn’t get it. Once again, McClelland hits a wall in his narrative, not just in terms of research, but of one person not quite understanding the other, one community not understanding another. McClelland’s reaction to the call is subtle, and just like his entire performance he doesn’t overplay it, but there’s a richness to his reaction that unites those in the audience who manage to pick up on it.

Because despite his constant frustrations in his attempt to find out about Kizzie, McClelland recreates something deeply meaningful: a history that has been lost to us, at least in a formal sense; a dark history, to be sure, but also one with breadth and depth and resilience and soul that absolutely comes blazing back to life in the songs.

These songs act as stepping stones, that help to take us along a journey a journey to find freedom and autonomy, sure, but McClelland brings us back, over and over again, to the ways in which autonomy is not just about being unconstrained, or escaping from oppressive communities, but about finding support and solidarity within the communities we do want to be a part of.