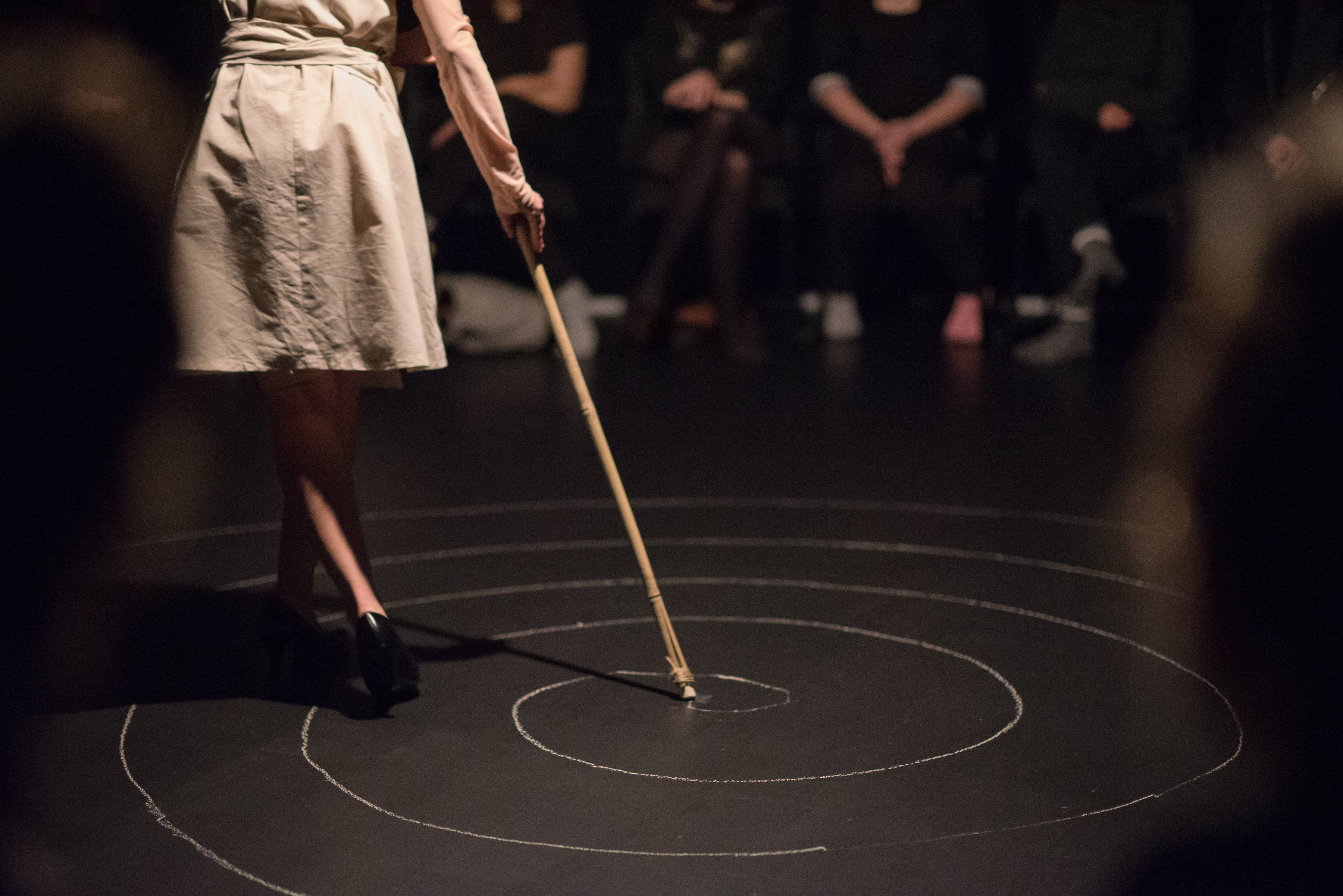 The Magic Hour, created and performed by Jess Dobkin, is nothing less than pure delight from beginning to end.

The audience is ushered into the upstairs lobby, where we are invited to hang up our coats and remove our shoes. Dobkin enters, wearing a dress made out of a burlap bag, greeting the audience at a microphone, and at first I thought she was an employee of the theatre, welcoming us, explaining the space, mentioning triggers in the show (and then explicitly warning us that we had, in fact, just been trigger-warned). The speech seems rehearsed, I think to myself, and at that exact moment she asks us if her speech is rehearsed, gesturing to the first of many in a long line of moments in which we’re not sure if she’s performing something or commenting on what it is to perform something (and what is the difference?).

She invites us into the main space. The usual Theatre Centre bleachers are gone and instead there is a large circle of seats in which the audience sits. Dobkin proceeds to draw a chalk circle within the audience circle, spiralling inwards and drawing lines outward towards various audience members. She then takes off the dress, under which is a beige suit that mimics a naked body – another mask mimicking what we think of as reality.

What follows is just over an hour of episodic vignettes of various kinds of performances: a speaker at a lectern giving a talk, a stand up comedian, a gymnast, a stripper. She disappears into the darkness and then reappears as a different character. Each of these moments is a performance and a performance of a performance – but each moment is engaging, and beautiful.

The show is also often funny, not in a straightforward or obvious way, but in a way that comes out of her ingenuous habitation of each moment. She’s not trying to create a certain effect, to manipulate us into feeling something or thinking something or identifying with a character, but to get us to join in with her genuine engagement with them.

Narrative theory and science are often opposed, but Dobkin’s performance got me thinking about how they are also aligned: within a series of events, some of which do not make sense, some of which are almost impossible to make sense of, we attempt to assert control. We explain cause and effect; we tell stories of how we get from here to there, stories of our identities, as though these are entities that are so easily made sense of. Instead, Dobkin reminds us about the magical element: the things that are unseen, things that appear and reappear, what hides behind masks and what changes unexpectedly, and that this unknown is as much a part of us and our history as our narratives are.

The sporadic and dissociated nature of the show is very well organized, which is its own special feat. The design is both beautiful and well-thought out. One prop becomes something else in a way that is both imaginative and practical – the big pink parachute becomes a blanket, then a dress. Props have to drop from the ceiling, be in the right place at the right time, for the sense of magic – of appearing and disappearing – to come off, and it was extremely well executed.

There is something beautiful in this disorder, something that, when given space to exist without the imposition of control, gives us a kind of catharsis from the everyday. Dobkin creates a space in which we can marvel at things without needing to explain them, creating a world in which we are allowed to simply experience that wonder and delight.