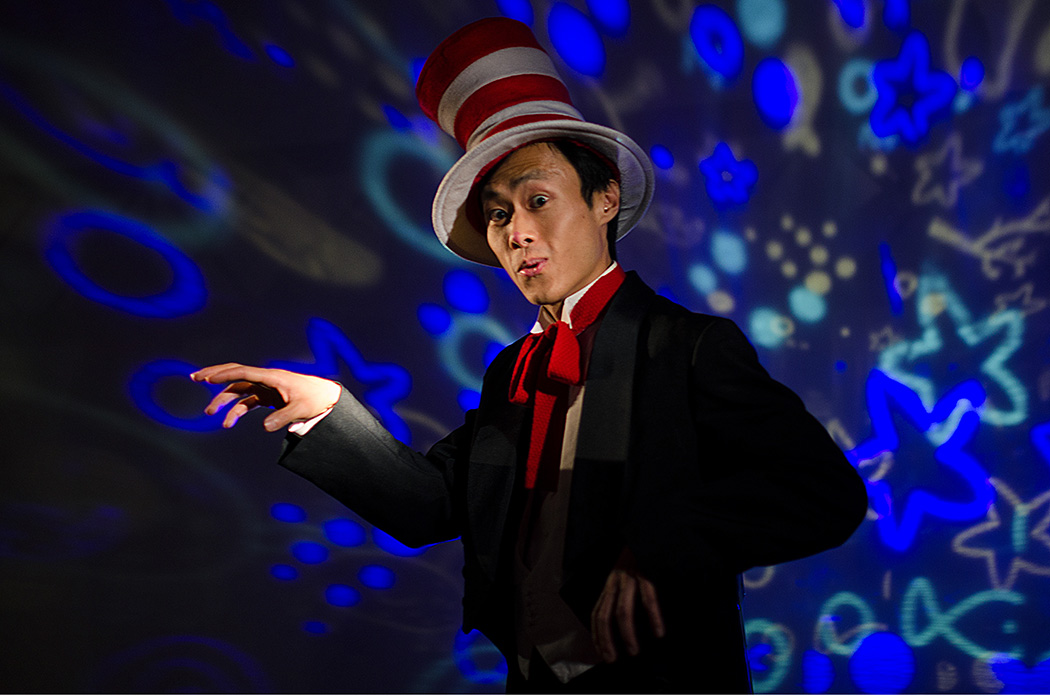 Oh the Thinks YPT Can Think

I love Seussical the Musical. I think it’s just about the cutest thing in the world, Ahrens & Flaherty’s songs are catchy beyond belief, and there’s more intellectual and emotional complexity in the storytelling than one might ever expect from such silliness. “A person’s a person no matter how small”, “tell yourself how lucky you are”, “Just THINK!”- show me one adult who couldn’t use a reminder or eight. For YPT’s latest production, directed by Thom Allison, the script has been streamlined to a clean 75 minutes (blessedly cutting out a lot of the unnecessary act two hijinks) and the heart and head that make Seussical more than silliness are abundantly clear.

Jonathan Tan is a charming Cat in the Hat, a winking bad influence with vocal talent to spare in a rare character part. The lead role of Horton, however, makes all the musical demands that the Cat does not and Jacob MacInnis more than delivers, infusing “Alone in the Universe” and “Solla Sollew” with stirring sadness and that please-never-stop-singing tenor of his. The other vocal highlight is the wonderful Erica Peck, slightly undercast as a birdgirl and Who mom but Allison’s choice to turn that mom role into the usually male Mayor of Whoville was much appreciated (Hey girls, you can be Mayor one day! Look, boys, how supportive Mr. Mayor is of his wife! More lines for Erica Peck!). Jeigh Madjus has trouble in act one finding the right head/chest balance as JoJo (a role usually played by a woman or a young boy for a reason) and the gulf between Erin Breen’s Mayzie and Arinea Hermans’ Gertrude isn’t wide enough, the latter a bit too showy (the giant glasses hiding her eyes don’t help with the relatability), the former not leaning far enough into the grand diva-ness of the megalomaniacal Mayzie. In the smaller roles, Mike Jackson is a fun schoolyard bully with a memorable rumbling bass as Wickersham 3 but Grace McRae could take up more space as the domineering Sour Kangaroo.

Though the production is very scaled-down from the average Seussical that has a cast at least double this size, Allison and his team do a good job of capturing the magic of the show. Charlotte Dean adds some confusing touches with costumes that marry a 60s mod aesthetic for the Jungle of Nool with something a bit closer to classic Seuss in Whoville but Judith Bowden’s simple polka dot set strikes the right balance of Seuss-but-not-every-Seussical and lighting designer Jason Hand brings the house down by bringing “McElligot’s Pool” to life in a scene the kids will definitely tell their parents about. Kimberley Rampersad could have been much more ambitious with her choreography and Jeannie Wyse’s music direction is messy and too keyboard-heavy to do the score justice but the voices, the text and the magic carry the show.

If only we could extrapolate Seussical into adult terms and force the world to think the thinks they can think, oh what a world it might be.