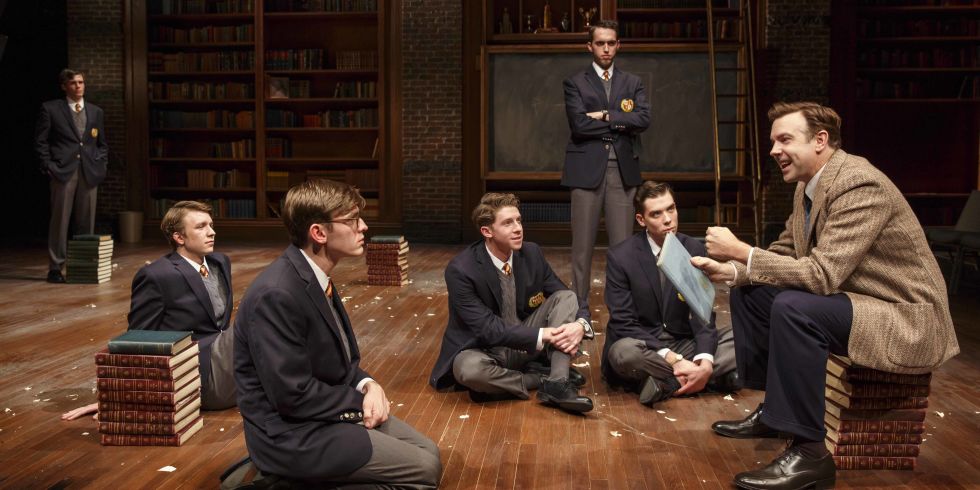 “That the powerful play goes on, and you may contribute a verse.” Uncle Walt’s verse gets renewed life on stage in the millennial classic Dead Poets Society – an ode to nonconformity and self-expression in a world that vows to stamp out individualism in favor of conservative practicality. Despite its flaws, the film remains one of my favorites in large part due to Robin William’s warm portrayal of the inspiring teacher John Keating. As a general rule, I only watch Dead Poets movie by myself. Not because I am a movie-watching loner, mind you, but I have this deeply rooted fear that other people might judge me for jumping on my couch while shouting “Captain, my Captain” at the screen in solidarity with the characters at the end of the film.* The new stage play, written by the original film screenwriter Tom Schulman, echoes the themes of the movie and retains the most memorable lines from the film, but, unfortunately, the adaptation feels hollow and unfulfilling in many ways despite solid casting choices.

For those of you who have not been indoctrinated in the school of Keating, Dead Poets Society takes place in 1959 at Welton Academy, an all boys preparatory school where youngsters of largely upper class descent are molded into the doctors and lawyers and bankers of tomorrow. Infusing life into the stuffy establishment, Mr. John Keating is hired to teach English. He immediately encourages the boys to seize the day and make their lives extraordinary, following whatever passions may seize their souls rather than falling in line like societal lemmings. All of the boys are impacted by Keating’s teachings, willfully calling him “Oh Captain, my Captain” and reviving the Dead Poets Society – a late night poetry club that Keating started during his time at Welton.** Overachiever Neil Perry is particular empowered by Keating’s words. Despite his father’s wishes that Neil become a doctor, Neil lands a role in a local production of A Midsummer Night’s Dream. When his father discovers Neil’s impertinence, the results are heart-wrenching but only serve to reinforce Keating’s most important lesson: carpe diem.

For all its similarities to the film, Dead Poets Society feels like a CliffsNotes version of its predecessor. Gone are all of scenes that take place with family members and love interests outside of the hallowed halls of Welton and, while the relationship between the boys and Mr. Keating has always been the most compelling part of the story, removing these outside interactions has resulted in a lack of necessary character development for many of the boys. Their frustrations, angst and insecurities have no understandable foundation, which the writer attempts to rectify by adding dialogue between the boys to explain their motivations. Unfortunately, words are a poor substitution for action. Without the intermittent character developing scenes, nearly every scene is loaded with sentimental weight and overt messages of empowerment, which diminishes the impact of these moments. Additionally, while the staging moves the plot along swiftly, the transitions, which take very little time on the nearly bare set designed by Scott Pask, make the plot seem oddly fixed in a single location – failing to transport the audience to another space. Japhy Weideman’s lighting design is the only technical element that effectively alters the audience’s sense of space and time.

These critiques are not to suggest that Dead Poets Society is a complete failure on stage. All of the beloved scenes from the movie remain largely intact, from the pictures whispering carpe diem to Todd Anderson’s self-discovery during an impromptu and terrifying poetry presentation in front of his class. Director John Doyle executes the dark ending of the play particularly well, building suspense simply but effectively with lighting and spoken prose. Additionally, the play’s focus on Mr. Keating’s work and relationship with his students is not an entirely unwelcome change. Keating is the sort of teacher that every student wants, but, more importantly, he is the sort of teacher that every student deserves. He is an enigmatic and bright mentor who disarms his pupils with humor and earns their respect through dedication to their development as humans – not merely their development as future professionals.

Given my affection for the character of Keating, it should come as no shock that I was uneasy with the casting for this show. One cannot replace Robin Williams. He is an icon. A truly unique creative force. Therefore, imagine my skepticism upon hearing that Jason Sudeikis would inherit the role of Mr. Keating in Dead Poets Society. However, my discomfort proved meritless – Sudeikis is no Robin Williams, but he handles the role of Keating with equal parts humor and heart, giving the role his own personal touch. His youthful energy nicely compliments that of his young protégés, but he carries himself with enough authoritativeness to make a believable teacher. Moreover, during the solemn finale, I dare anyone to look in Sudeikis’ tear-brimmed eyes and not grow just a bit misty-eyed as well. An acting highlight among the younger cast members is Zane Pais as Todd Anderson. Pais’ nervous stutter and general discomfort at the outset of the play make Todd’s key revelatory moment of self-enlightenment all the more powerful and poignant. Other enjoyable performances include Bubba Weiler as the hilariously geeky Steven Meeks and Thomas Mann as the ultimate victim of expectation, Neil Perry.

Those who share my fondness for the movie version of Dead Poets Society may feel let down by the sparse plot in the staged version; however, there are enjoyable moments in this theatrical reincarnation, including Sudeikis’ interpretation of the beloved teacher John Keating, that make Dead Poets Society a beautiful and worthy play. Oh, and a word of warning: do not stand on your front row chair at the end of the show. People will stare. Not that I know from experience, of course….

* Usually as I finish off a bottle of Pinot Grigio while covered in the remnants of my Pad See Ew take-out. I know, I know. It is a totally irrational fear.

**Yes, teenage boys voluntarily opting to sit in a dark cave and read Tennyson and Byron. Just roll with it.