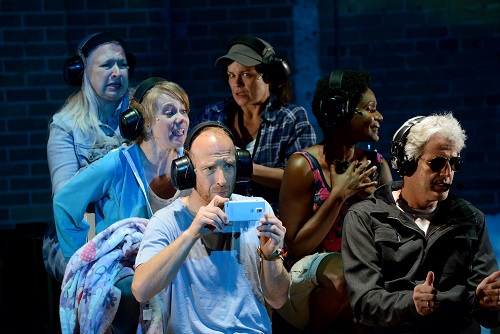 The Watershed at Tarragon

Originally produced during the Pan Am Games, Tarragon’s remount of this show kicks off its 2016-17 season. A new Canadian play, The Watershed was commissioned as a piece on the theme of ‘water.’ Playwright Annabel Soutar took up the challenge, investigating the topic both literally and figuratively, in order to write a play about what water might mean to Canadians (and what Canadians might mean for water).

Soutar’s story is essentially a recounting of her own journey to research and write the play: her attempts to research water handling and testing lead her down a rabbit hole of evasions and politicking, particularly surrounding the controversy over the Harper government’s de-funding of the Experimental Lakes Area (ELA) located in northern Ontario, an important real-world laboratory that monitors environmental pollution and acid rain. Underlying this journey are questions about how and why we disagree about values, policy, and reality, and how we can try to bridge communication because of, but also in spite of, these differences.

The execution of the show itself is excellent. The play is very busy – there are a lot of characters, there is a lot of information being thrown at us, and a lot of different cuts back and forth between and within scenes. Chris Abraham directs all of this with beautiful clarity, making it mostly possible to follow despite all of the moving parts. Gorgeous lighting design by Kimberly Purtell helps to create distinct spaces within the action, providing dimension and definition. The acting is strong across the board: Laura Condlln, Bruce Dinsmore, Alex Ivanovici, Tanja Jacobs, Ngozi Paul, Eric Peterson, and Amelia Sargisson form a strong ensemble, with Kristen Thomson holding the various threads of the story together in her portrayal of Soutar at the centre of the action.

And yet. I tend to have misgivings about this kind of content, for a number of reasons. Certainly, the subject is important, it’s educational. But the content seems like it would be so much better served as an actual documentary, or as an essay in the New Yorker. As a play, it reminds me of the kinds of productions that tour high schools to explain why you shouldn’t bully other people. There is an educational undertone that comes off as somewhat preachy and patronizing, and doesn’t really fit the theatrical form, a form in which often the best stories are those that cannot be translated to policy platforms.