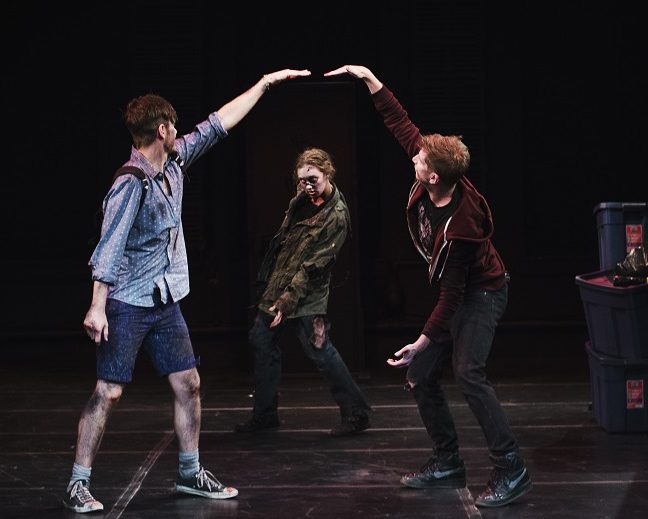 On Stage in TO: Zombies & Kittens

Dead End (Theatre Lab)
This light-hearted one-act from playwright Jonny Sun and director Michael Orlando is the perfect Halloween-themed diversion in Toronto’s current sea of self-serious theatre. Sun traps bantering high school pals Christian Smith and Chris Wilson* in a dead end hallway as they flee the zombie horde that’s taken over their school, inviting the audience to watch in real time as they rehash how they got there, bicker over a granola bar, joke about nothing and are forced to face themselves. One single zombie (brilliantly created by effects designer Megan Fraser with makeup by Valentina Vatskovskaya and costume by Roselie Williamson; played with remarkable physical control and rewarding nuance by Ceridwen Kingstone) stands between the boys and freedom. The dialogue needs to come quicker for the characters’ tangents to make emotional sense and the thought-provoking twist is over-explained but Smith and Wilson are delightful accidental heroes who make an hour in a dark hallway with a wailing monster somehow fun.

Two Kittens & a Kid (Beyond Boundaries/Buddies in Bad Times Theatre)
An original musical solo show about Christopher Wilson*’s experience “raising his inner diva”, Two Kittens & A Kid has a big heart and a lot of pizzazz but it skims on substance. After becoming a foster parent to one of his music students, Wilson suddenly found himself a divorced gay white man raising an adolescent black girl he calls Kidlet. The story is a remarkable one and Wilson is a compelling storyteller but Ryan Kelly’s broad direction combines with a tentative script to deliver something somewhat less remarkable and compelling than the sum of its parts. Wilson’s songs are catchy but they’re also gimmicky; he sings a funny “brief history of the N word” but doesn’t go beyond a sentence or two when recounting his actual reaction to being called the N word by his daughter. There’s a long section about her skin and haircare but it boils down to an amusing dad joke about how much money it costs, barely touching on the fascinating realities of both race and gender that make Kidlet’s beauty regimen hard for Wilson to fully understand. Two Kittens & a Kid has the potential to be a really beautiful and insightful show but Wilson needs to dig deeper and bare more to lift it beyond the simple charm of its current iteration.