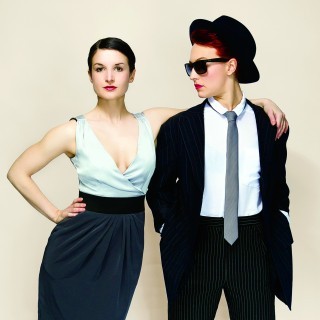 I have to write this review with an extra level of care. Not a fear of offence; I want get across the show’s provocative manner, after all. But I’m extra-conscious that what I’ll write will uphold some very unconscionable standards. And please don’t think I’m indulging with artificial difficulty, either. I could write in a cold, broadsheet style, but I shouldn’t, because Two Man Show is a production that leaves you too alert about the assumptions of masculinity, of femininity and of the substance in around and between and beyond them to do that. It’s a work that worries you (or male me, who didn’t worry about these things before) with its implications for our current egalitarianism. Yes, the depth and range of the critique warrants discussion, but I’ll make it clear from the outset that this piece is pretty devastating to the status quo.

Abbi Greenland and Helen Goalen are Fringe First-winning RashDash, a company from Hull who just did an Edinburgh run, though they’re joined by Becky Wilkie who helps with the lion’s share of the show’s music. The group perform on the Soho Theatre’s uppermost stage, turned into a traverse space with bass drum, snare, pedestal at one end and piano, guitar, looper pedals at the other. Behind both ends are two light-bulbed structures by designer Katharine Williams: a big ring versus straight lines, suggesting a phallic/yonic divide where the actors explore the liminality in-between. And, for a time, this is what they do.

All three women take the stage in space-age Lamé and sing beautiful (note the use of that word) harmonies. They then declaim in unapologetically shrill microphone-modulated voices the prehistorical causes of gender inequality. Ostensibly from the future, their punky opening is a treatise on the way roles in human reproduction went unnoticed by hunter-gather societies, how they were then noticed as animal husbandry picked up and how they were then exploited when men realised they weren’t that central to the baby-making process and feared for their utility.

Is the theory these futurist characters promote true? It doesn’t really matter, but it’s true that reproduction is still male-controlled and their purpose, I think, is to stir anxiety because, even if it’s not the theory they present, something has ruined the gender equilibrium (although not that an equilibrium is so desirable; Rashdash want to dismantle the gender binary too, though that comes later). We learn that present-day subjugation is not a complex evolution of the first dynamic between cavewoman and caveman. Something definitely went wrong, since animals are no way near as messed up as we are re: equality, so their speech introduces a desire to find what went/ what is going wrong. And it’s a brilliant thing to generate, even if it’s built on a dubious premise (which, in the questioning mode you put yourself, you’re invited to find dubious).

The sense of wrongness continues. The sci-fi get-up is stripped off so RashDash can dance. And they dance some seriously exuberant routines, involving lifts and force which overall connote a conflict of support and coercion (with the help of Wilkie’s eerie soundtrack).

But there’s a shock: the abstract dance gets struck down and a (very) naturalistic drama replaces it. Almost belonging to another production, Abbi and Helen become John and Dan, two brothers reunited in the dying days of their father, the former brother now a full-time carer. John is struggling to support his dad and Dan is struggling to support his wife and both are struggling to support each other andwowthisnarrativeisoutofplace. It’s so kitchen sink and ‘new writing’ that it hurts, because it shows that a realist drama is abjectly inadequate to the demands RashDash establish. But they’ve done this knowingly (despite the Ed Fringe reviewers who horrifically took the clashing styles at face value). The John-Dan saga is like every ‘unflinching’ play endemic to London theatre where the unflinchingness is borne entirely of content rather than form, so it demonstrates that the common mimetic style of theatre is inappropriate for a truly progressive agenda. Like Burning Doors, Two Man Show shows how essential form is—and will perversely ruin naturalistic theatre for me for a good while.

To make it clear: most of the performance is an alternation between the ‘gritty’ narrative of the men and the physical narrative of the women, with a dialectic formed to be exploited in the play’s conclusion. On its own, the dancing is multifaceted: it’s fairly good at lambasting the patriarchal straitjacketing that has occurred and still occurs in art today—in fashion, film, music, stage and dance itself—but it’s a tame critique and yet, despite the tameness, RashDash enhance their argument by being a) first-class dancers and b) as comfortable naked as clothed. This b) quality is effective because the nudity asexually lacks any shame in showing their exceptional musculature and, after they’ve mixed-matched combinations of clothing and not-clothing so many times, it renders the idea that someone could be told what to wear pathetic; it’s liberating, butut there is, problematically, an image presented where Goalen is dressed wrapped tight in gold satin with fabric slung over her head. It resembles a hijab, and she stumbles around in her new costume evoking restriction and bondage—which is the opposite of an intersectional message no matter how inadvertent it is. Also, despite the additions, the critique remains pretty dull, though weak articulation may be on purpose considering my next point.

RashDash + Wilkies’ skill liberates in another way. As mentioned before, Greenland and Goalen are multi-talented, which means they’re capable of doing ‘beautiful’ things like polyphonic singing, smooth dancing and realistic acting. But they can also be brasher, harsher and not do the bourgeois stuff we are meant to like in London theatre. This, as with the other techniques, breaks the expectations and dichotomies and strengthens the work’s outwardly deconstructive finale.

This finale is another formal break and one that’s been called a rebuttal to the critics of RashDash’s last production, because the piece melds its male and female explorations by having John break out of his story and confront Helen about the point of the play—especially why she found the need to dance for so long. Helen says dance is a better form of expression for her as language is too male-influenced to facilitate authentic communication, and just like the play’s opening, this argument is of that curious-and-possibly-specious variety: it’s a vehicle for promoting investigation rather than a vehicle for the play’s ‘message’, inducing interest but not some definitive declaration. Still, this meta-commentary seems too apologetic for a show loaded with anger; still again, it does serve to continuously fracture any comfort you have with its form.

Mid-finale, John and Helen argue until John starts a rant, asserting he shouldn’t have to question his identity. But then he admits his character’s a little bit Abbi (the feminine side of Greenland’s performer-character; not her but a character, though role and actor may share similar views). Then suddenly Abbi is John and John Abbie, a “man-woman”, and at some point John becomes not just Abbi, but a howling, soliloquising Abbi with polemic fire who resents the reservation of masculinity for men and femininity for women. This more fluid Abbi wishes to have either qualities or both or none and for that to not annoy people so damn much. Now, her transformation and monologue could amount to a “you go girl” speech, but it’s not trifling because Abbi cuts off any path the reactionary side of your brain wants to take in willing her to conform—be quieter, stick to one identity, stop talking. No. She will not bow or dissolve into a dismissible termagant figure. She is herself, and this is a canny way of highlighting how much gender links to performance, though be clear, I’m not conflating drag queens with trans people. More that gender expectations manifest themselves performatively and so performance is a way of deconstructing them.

Then the monologue ends, and Helen (the performer-character of Goalen, but not necessarily her) has a right of reply where she sings the praises of consistent feminine identity, using her time to mince around the traverse playing coquette and dancing with a pink kimono in an ode to exoticism. So, in dialectic fashion, she gets to articulate her stance, but in spite of the apparent inclusiveness of two monologues where characters thoughts can run free, these monologues aren’t given equal weight. Form-wise, man-woman is dominant over woman because she goes first and has a longer, louder speech that’s not a comedic whimper. There doesn’t seem to be an ecumenical answer in this regard.

So there: Two Man Show is confidently unconfident. Like another Soho production, Burning Doors, RashDash’s work is a critique with few answers but ultimately a source of bracing uncertainty. It stays with you, keeps you on the lookout for gendered thinking—that, as a product of their dramaturgy, is impressive. There are of course aspects to be problematized, like if they didn’t show off their singing-acting-dancing talent so much, would their position have even half its impact? Do you have to be exceptional to look right? I don’t know, but RashDash are exceptional. They deserve the accolades and I’ll surely see what they make next.