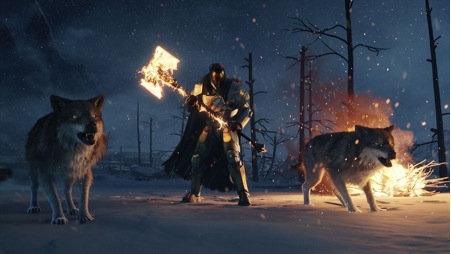 Everything I’m playing right now is an MMO in some form or another.

From the one great success of the genre, World of Warcraft, to the only shooter hybrid to really work, Destiny, and the licensed mega properties of Star Trek and Star Wars.

I’m not the first person to say this but oh how I wish The Old Republic wasn’t an MMO. A massive RPG in the same world as Knights of the Old Republic but where your character choice isn’t limited to ‘good guy’ Jedi, the best idea TOR has is distilling every major Star Wars character into an RPG class: Luke is the Jedi Guardian, Vader is the Sith Warrior, Han Solo is the Smuggler, Boba Fett is the Bounty Hunter etc. Eight character classes, each with their own unique, fully-­voiced story spanning multiple planets. On paper it’s so exciting. In practice, there’s so much ‘MMO bullshit’ it makes my eyes bleed.

Recently the designers increased the XP rewards and highlighted the main story quests so your badass Sith Inquisitor doesn’t waste his time gathering 10 condor guts. Every character has a main driving want and clear antagonists who are caught up to, killed, and replaced at a regular pace. I’ve played at least the first ten levels of every character and it works for all of them but, again, the gaps in between the story missions are enormous. You spend so much time running through giant environments filled with shoot-­on-­sight enemies that have nothing to do with your mission. Sure, a Sith Warrior might tear apart everyone in his way, but a smuggler isn’t going to blast every street punk in Nar Shadaa on his way to a meeting.

Maybe this is a larger issue, and is definitely something I think about when I play Star Trek games. Star Wars games are always action games. Now, sure, there’s a lot of action in Star Wars, but one of things that makes the KOTOR series so beloved is they also capture the mysticism and charm of the franchise. KOTOR was one of the first RPGs I played and I’ll never forget the moment I realised I could hack a computer and flood a room full of enemies with gas, or use the Force to circumvent certain obstacles. SW:TOR has some moments like these in its lifted-­from­-Mass-Effect dialogue system, but the combat is constant and relentless ability spamming, even as a Jedi Consular, the games’ equivalent of Yoda or Old Obi­Wan.

I’m a little embarrassed to admit this, but I am having a blast playing WoW. I played it when it first came out, when it was full of bugs and features and it got by on a lot of the “Gee whiz we’re really in Warcraft” goodwill, but there’s a reason it’s still insanely popular twelve years after release. My main, a human Paladin, is now level 23 and this game is absolutely packed with content and usability. As someone who played the game at launch, I’m really loving how they’ve updated the world to reflect the changes that have occurred with all the expansions. Last night I ran a dungeon that was an update of the Defias Deadmines, the first dungeon for Human characters, and it started with a cutscene of what happens at the end of the original dungeon.

The embracing of player characters into the mythology of the Warcraft universe is really exciting. Manipulative as it is, it’s still pretty thrilling to know that some of the events and deeds you’re being told about by NPCs were perpetrated by other players, not just characters created by Blizzard. I know enough about Warcraft, having been a huge fan of the RTS games, to be totally sucked into the lore of the world again.

The fact that Blizzard has perfected MMORPG game design doesn’t hurt either. Quest locations are brightly highlighted on your map and overlap twice and sometimes three times over, so multiple quests will send you to the same area at the same time, minimizing backtracking. The game also features an ‘Adventurers Guide’ that suggests tasks, quests, and activities for you that update as you level up and reach new areas. The whole thing is so slick and, for the first time in a long time, the fact that there is SO MUCH ahead of me is exciting rather than daunting. Who knows how long the gloss will last but, at the age of 31, the best game I’m currently playing is one I had written off when I was a teenager.

Last week I hinted at the new Destiny expansion so I’ll touch on it a bit here just to address something I mentioned in that article. I said that I hoped the team would take the lessons learned in character development from The Taken King and apply them to all their content going forward.

Rise of Iron, the last big expansion before the (still unannounced) Destiny 2, is so far just another mission pack with a new level cap. Like The Dark Below and The House of Wolves, Rise of Iron built on a lore framework that was established in the original package. This time it’s the origin of Lord Saladin who runs The Iron Banner, a regularly occurring event in Destiny that allows players to use their full power against each other in multiplayer.

See, in vanilla destiny multiplayer (They call it The Crucible because Bungie seems to be allergic to standard game terminology), players look like their single player avatars but their guns and special powers all do the same base amount of damage. In Iron Banner, their stats are carried over from single player so all your carefully constructed builds are kept intact.

The Iron Banner, as far as I know, was rolled out to address a major complaint a lot of players had with Destiny: that they couldn’t show off their hard work to other players and, more importantly, use it to pwn n00bs. My opinion of this useless gamer machismo notwithstanding, it’s pretty interesting that Bungie has taken what was, on the surface, a response to player feedback and turned it into major story content.

The problem is no one cares about any of it. Like I said last week, a mystery is only a mystery if there are clues to solve it. The origin of Lord Saladin was mysterious because we were told it was. Everything in Destiny is mysterious because Bungie is terrible at telling stories. We find out in Rise of Iron that Saladin is the last of the Lords of Iron who were proto­-Guardians who all died (even though they’re immortal) trying to protect the Earth from some superelement that breaks down everything it touches into its component parts like the mining laser from No Man’s Sky. In the opening cinematic, you’re introduced to six new characters, expected to care for three of them (even though one has been dead for centuries and never speaks but, hey, she’s a pretty lady so I guess that’s enough), and this entirely new evil thing, and also a whole new sect of Fallen that are different from regular Fallen. All of this information is brand new and barely hinted at in the larger story.

One of the major problems with Below and Wolves was Bungie had let go of original voice actor Peter Dinklage so Ghost, arguably the main character of vanilla Destiny, had no lines in either of those expansions. Since the main character barely speaks anyway, this lent an inauthenticity to the expansions that recalled those 300­-levels­-in-­one packs for Duke 3d and Doom. Now that they’ve secured Nolan North for Ghost, he’s got all kinds of dialogue in Iron but none of the other main characters do. Zavala, Cayde, and Ikora don’t say a word about anything that happens and the player character never lets out a peep even when he is directly spoken to.

All the heavy lifting is left to Saladin who has NO character development, or defining features, other than his painfully naive nobility. In a recent Lessons from the Screenplay, the creator quotes Story by Robert McKee: “Likability is no guarantee of audience involvement; it’s merely an aspect of characterization”. Saladin is noble, heartbroken, tough, and focused but he’s not there at all. He heaps praise on the player but it’s all empty, the scope and the achievement of the story are drowned in technobabble and unearned emotional moments. But, hey, he sounds like Optimus Prime so…