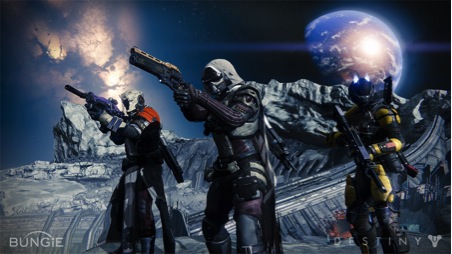 I haven’t had much time to play this week, but I have been working my way through some Destiny content in a fireteam. It got me thinking about something I mentioned in last week’s article, about storytelling in multiplayer.

Destiny
While waiting for my friends to be ready, I came across the product page for Destiny in the Playstation store. This is how it describes the game: “The next evolution of the first-person action genre that provides an unprecedented combination of storytelling, cooperative, competitive, and public gameplay, and personal activities that are all seamlessly woven into an expansive, persistent online world.”

Holy shit! A marketing intern spent a lot of time slamming design document bullet points and publisher expectations into each other to make this come out the other end. When I teach, I tell my students not to try and anticipate what they think their audience wants. This is like watching a company juggle.

I wouldn’t call it ‘unprecedented’ but I suppose they do succeed. I mentioned in a previous article the thrill of seeing your character drop into a cutscene at the beginning of The Taken King, the latest and biggest expansion, and you do take that character through a series of single player and multiplayer story missions, as well as competitive multiplayer matches. There is also a lot of what I’ll call MMO bullshit, daily stuff that you grind for specific currencies that garner you points with different vendors to get better, or at least unique, gear. It’s all designed around this persistent world illusion but the illusion is thin indeed.

I think it would be more compelling, with the rate of expansion releases being what they are, to have a sort of ‘cold war’ between major story events. Now, in the aftermath of The Taken King, sure the big bad guy is dead but it doesn’t feel like you’ve made much progress at all. There are Taken all over the place. There are also House of Wolves and Disciples of Crota running loose all through the solar system despite you having eliminated their respective bosses two and three expansions ago.

I stumbled on an ‘extra’ story mission last night while playing my max-level Warlock. I concerned hunting down and imprisoning a pretender to the Throne of Oryx, the ‘Taken King’ of the expansion, to keep in the Prison of Elders, a wave-based (‘Horde mode’ to use the Kleenex term) cooperative arena that is yet another purveyor of never-ending thrills and vendor-specific loot. This, at least, is an interesting acknowledgement of the techniques influencing the story. It would be an interesting addition to the story of your Guardian if you became a sort of Ghostbuster, seizing worthy enemies to enslave in the gladiatorial arenas of The Reef.

Here Bungie’s scattershot storytelling bites them in the ass again, where a lack of exposition is sold as mystery. The Taken King took great advantage of Nathan Fillion and Nolan North’s everyman charms to humanise the characters of Cayde and Ghost, even turning humourless robot Zavala (Voiced by The Wire‘s Lt Daniels, Lance Reddik) and Space Witch Ikora (Firefly‘s Gina Torres) into real people, but there’s still a barrier between writer and consumer that doesn’t help anyone. Mysteries are satisfying the closer they are to not actually being mysteries, a puzzle is most intriguing when you can almost solve it. After a while, the endless towers and eldritch wonders of Destiny all start to blend together into sci-fi/fantasy nonsense.

The next expansion, Rise of Iron, will be out for my next article and I’ll hopefully have enough to say about it to provide some insight here. However, all I know about it is there is a new ancient enemy corrupting a familiar foe and threatening The City. It sounds awfully familiar to Taken King but, if they can go even further with the strides they’ve made in humanising their characters, I can forgive a lot of technobabble for the sake of an adventure.