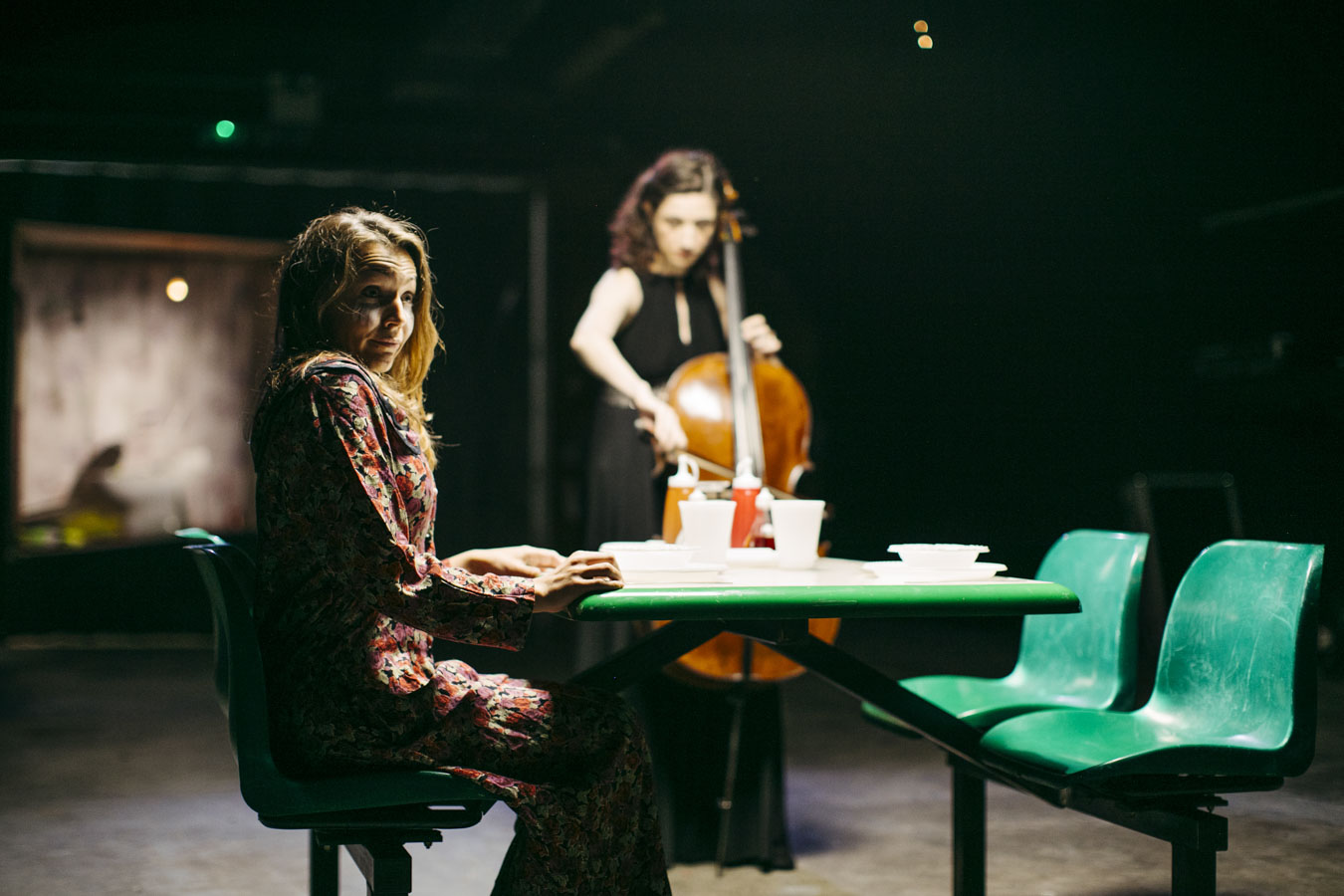 dreamplay by BAZ productions at the Vaults

Stringberg’s 1901 work A Dream Play is historically important: its lack of structure, condensing of characters to social roles and narrative current that winds along by way of thin associations between people and places mean it was a herald of dramatic surrealism and expressionism. A dream-like tapestry that eschewed the trappings of realism that Ibsen and Chekhov (and Strindberg himself before his psychotic episodes) had popularised. The original script has the daughter of Indra, the Vedic god of gods, come to earth to view the suffering of man. She adopts the name of Agnes for her journey and inhabits the lives of forty characters in a wildly expansive setting, including a castle on a dung-heap with a massive chrysanthemum budding on top. As you can tell, A Dream Play formally tries to mirror the canted logic of a dream. For this reason, it’s also hard to mount, and rarely done without serious edits as in Caryl Churchill’s 2005 version for the National.

And so we have dreamplay by BAZ productions, whose title portends more smart editing, though whose indifference to grammatical form implies some continuation of Strindberg’s vision. Promenading through various rooms of the Vaults, the audience is half-immersed, half-distanced by the company’s work: a chopped-up interpretation by director Sarah Bedi and ensemble, who have pulled strands from the source and set them down in a brutal and manic array.

It’s a redoubling task carried about by the company and a nifty one, too, because they’ve taken a play that was mystifying in its time and mystified it further a century later. Wordlessness, a subjugating cello and a parody of a school lesson in pitch darkness—hazy associations form between BAZ’s narrative and Strindberg’s; like Agnes, for instance, who could be Jade Ogugua’s aphasiac god-like figure, as long as you interpret the final scene as Indra sending his daughter off to meet the audience at the play’s beginning. It’s as though the story is her dream rather than that of an unidentified dreamer—like a pataphysical realm of metaphor on metaphor. If the original is a break from realism then this one is an abstraction two stages from rationality, or at least it should be.

Strangely, dreamplay veers so far from the original at times that it loses inspiration, the scenes often forming burlesques which lack the wit to carry us through them; a particular dampener is the long, ill-judged lampoon of French absurdism that falls flat without insight and (funny) humour.

There are, however, aspects which ape dreaming to an uncanny extent. With a form-shaking way that Strindberg himself could have never imagined with the strictures of the proscenium arch, BAZ productions works in a sense of theatrical abandon: in a Lynchian mode, a man-sized baby enters a naturalistic domestic tiff, but the response of the characters is to hide him away or testily ask how the other knows him, not “why is there a man-sized baby in my apartment?”; some neat subterfuge occurs when Michelle Luther’s angry French woman baits an audience member into admitting the identity of his fiancé, an actor in the company, only for the audience to register that he is one of cast. Along with the repetitious, slightly carping dialogue common to absurdism, these techniques offer access to a hypnotic state rarely found in theatre, though they’re unfortunately rare and too unsustained to break the lucidity.

Bear in mind there’s an assumption in praising the hypnagogia of dreamplay. Why do I automatically think experiencing a play like a dream is good? There are some justifications, yet they don’t all jibe with the context of the production. And calling something ‘dreamlike’ might just be a way of rebranding a play with spindly construction. It may have other effects, though, like formal exaggeration to make an audience more receptive to emotion, as in expressionism. Or the impressionistic vibe could give a bolder portrait of character than straight narrative can.

Still, these answers don’t explain why dreams are specifically useful for dramaturgy, but more importantly, watching dreamplay doesn’t tease out a better argument for its use beyond the mild frisson that forms from the association of your unconscious with what is unfolding onstage. These moments make the production seem an experiment, which is a healthy thing, and I appreciate to no end the ripping and gluing of a seminal work into something that isn’t just a blind revival. For this, even if their work isn’t so conceptually unified this time around, BAZ productions have shown their willingness to test out the dramatically bizarre and therefore deserve kudos.