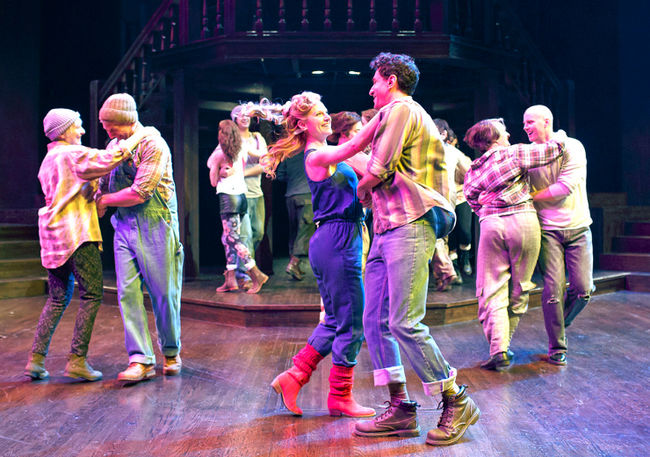 Set in Newfoundland in 1985, director Jillian Keiley’s production of Shakespeare’s irresistible pastoral is simple, lighthearted and creative. A bare stage gets its sense of place from the actors (designer Bretta Gerecke‘s comical ’80s costuming, accents of varying effectiveness) and the audience. The crowd is armed with grab bags full of participatory aids like bleating sound machines (“without the bleats, there’s no irony!”) and glowing plastic stars to be wielded at the request of a vibrant Robin Hutton as Hymen the Goddess of Marriage, an otherworldly bit part that’s been intriguingly expanded to become the narrator, conductor and general setter of the production’s sweet but snarky tone.

The pacing of act one is glacial but the production quickly picks up speed, rollicking along after intermission to a great conclusion that’s only undermined by an interminable audience-participation dance party. The Newfoundland setting is a nice nod to a vital piece of our national culture that is often underrepresented outside of the province itself but Keiley’s key innovation here is less her setting than her casting and character development. The thoughtful and authoritative roles of Duke Senior and Jaques are changed into female characters played by dependable veterans Brigit Wilson and Seana McKenna respectively (the latter is expectedly delicious as the contemplative forester whose overactive mind and conscience will give her no rest). The Duchess and Jaques join Rosalind, Celia, Phoebe and even, in her way, Audrey as newly considered characters.

While Rosalind- here played with provincial pluck by Newfie Petrina Bromley- is generally considered one of Shakespeare’s strongest female characters (a rare heroine who dominates her play’s line count), the other women of As You Like It are rarely given the respect Keiley and her actresses show them. Celia, in particular, is refreshingly freed from the ingénue-itis with which she’s usually plagued, Trish Lindström beautifully unlocking the strength, wit, sarcasm and complexity that’s always been in the text but so often goes unseen. Upon arriving in the forest, most Celias lie around, teasing Rosalind and waiting for Oliver, but Lindström’s Celia sets about making a life for herself in her new, notably self-imposed, surroundings- she whale watches, she rabbit hunts, she fixes fishing net, she tries very hard to chop wood despite having no idea how to go about it. By the time Oliver arrives and declares himself willing to “here live and die a shepherd”, she’s able to show him how.

Ijeoma Emesowum’s Phoebe is also given some very welcome benefit of the doubt. Rather than jump on board with Rosalind’s accepted narrative that Phoebe is simply too vain and snobby to love Silvius, Keiley and Emesowum let some of the shepherdess’ most interesting lines land with more sincerity, illuminating the pursuer’s selfishness in framing the woman he loves as having “murder in [her] eye” for the crime of simply not loving him back.

The effect is a remarkable shift of power and a new perspective on Rosalind’s actions as Ganymede. The women here are all the savviest characters on stage; the men are, for the most part, complete dolts: Cyrus Lane’s sweet dumdum Orlando (a Keanu Reeves-meets-Spicoli sort of dude), Sanjay Talwar’s lightweight Touchstone, Scott Wentworth’s short-sighted Ferdinand, Jamie Mac’s wide-eyed Silvius (whose faux-tough-guy costume is straight out of the Fulton Reed collection). When she pretends to be one of them, Rosalind starts to fall into some of their bad habits. Celia’s line “You have simply misused our sex in your love-prate” is launched with utter seriousness, Lindström’s straight-shooting, self-sufficient Celia feeling her cousin’s betrayal as she completely bends for love. Her tirade against Phoebe is harsh and largely unprovoked (“call you this railing?!”) and it’s only when she begins to be exposed as a woman (4.3’s “swooning” incident, problematic no matter how feminist a production) that Rosalind recovers herself and returns to the stage with a head clear enough to pull off her “as I love no woman, I’ll meet” plan in act five.

The simplification of all the male characters gives the audience fewer complex people to care about but Jillian Keiley’s As You Like It is about the women, first and foremost, truly and completely. Though I certainly missed a scene-stealing Touchstone and a sharper Orlando, it’s about time someone told this female-driven story from a strongly female perspective. A welcome slant on a well-loved play.