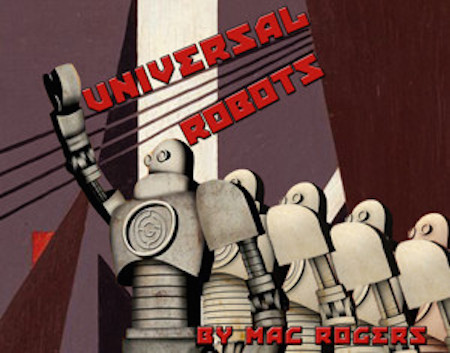 Karel Capek introduced the world to the word “robot” in his 1920 play R.U.R., but it was Isaac Asimov’s on-going exploration of mechanical men, including his three laws of robotics proposed in 1942, that solidified the role of robots in science fiction history for all time.* Through a handful of novels and nearly forty short stories inspired by Neil R. Jones’ earlier writings on human-like machines, Asimov explored numerous ethical, social and philosophical issues surrounding the creation and use of robots by humans, and it is Asimov’s work, and the writings of many other science fiction authors, that makes Mac Rogers’ play Universal Robots feel worn. Using robots to explore the frailties and singularities of mankind is hardly a new venture, after all, Capek did it in R.U.R. and Asimov did it in his collective work. The science fiction vehicle is particularly well suited to grappling with the complexities of human existence, including the nuances of politics, religion, war, pain and love; however, Universal Robots too often feels like an amalgamation of the content that proceeded it, rather than a unique work.**

Capek’s R.U.R. was about the development of robots, built with reason but not emotion, to serve the human race and the subsequent destruction of the weaker human race by robots – storytelling elements that Rogers borrows in his play. Set in 1920s Czechoslovakia, the main character in Universal Robots is a playwright named Karel Capek who meets regularly with fellow writers, including his sister, Jo, and the Czech president, Masaryk. After conceiving of a play in which every woman gives birth to both an artistic child and a “drudge” (i.e., a child who has no ambition and works solely for the economic development of the state), Karel is approached by a young woman named Helena who reveals that “drudges” are real. Helena introduces the group to her mother, Rossum, who has created, and seeks funding to continue creating, artificial men (i.e., robots). Wary to take on the project because of his religious convictions, the Czech president promises to support the program provided that Karel and Jo review the ethical considerations of building such creatures, including ensuring that the robots will harm no one and that the jobs of the working class will be preserved. Unfortunately, in an effort to protect human life and undertake a seemingly worthwhile moral cause, the group unwittingly creates the circumstances for their own demise at the hands of their mechanical creations.

It is unclear whether Universal Robots is meant to be an artistic nod to Capek and Asimov’s work or a usurpation of it. In addition to borrowing Capek as the main character, the plot of Universal Robots often closely aligns with that of R.U.R., including the eventual destruction of the human race and the discovery of “Adam” and “Eve” robots that can re-populate the earth. Also, the robots are given rules to live by, such as the order that they cannot harm humans unless re-programmed to do so and they must not harm themselves or other robots (i.e., they are programmed to recognize “pain” and alleviate it), which mirrors the rules set forth by Asimov. At one point, robot Radius blatantly references Asimov’s popular novel I, Robot by invoking the title in a tense climatic scene of self-awareness.*** The narrative of Universal Robots intrigues in its complex examination of what it means to be human, as both R.U.R. and Asimov’s tales did before it, but where does the line get drawn between an original work and a remake? While the program states that some situations and dialogue from R.U.R. are adapted for Universal Robots and some of the elements of Capek’s life and work are integrated into the play as well, Universal Robots is intended to be “an original speculative drama.” Of that, I am not convinced.

Universal Robots does distinguish itself a bit from its science fiction brethren by examining the implications of robot use on communism and Christianity; however, these discussions never feel fully developed in the core narrative. For example, every time President Masaryk referred to his Christianity as an influence on his decision-making, I found myself asking “so what?” Despite stating otherwise, President Masaryk never appears to really wrestle with his attempts to “play God” with respect to the robots, nor with his decisions to squash the revolutionaries opposing his regime. Had his beliefs weighed more heavily upon his decisions, this aspect of the plot might have been more compelling. Moreover, there are elements of the plot that prove difficult to rectify with the logical underpinnings of the narrative. For example, Radius returns from his time at war a seemingly changed robot – a robot suffering from a sort of PTSD who cannot overcome the suffering incurred by his fellow robots nor comprehend the “death” of his fellow robots. However, given that a robot’s actions are based upon programming and logic (including the concept of “pain” which is really just a self-survival alarm), this sudden development of human-like emotion is inexplicable, although convenient for plot-development.

Several members of the ensemble embraced the intricacies of their characters with aplomb, including Hanna Cheek as the weary and lovelorn Jo, whose scenes with robot Radius were both poignant and heartbreaking, and Jason Howard as the first robot created, Radius. Howard has proven to be a stalwart in roles that demand a unique level of physicality and mechanical behavior, and the role of Radius gives him the opportunity to display the breadth of his physical and emotional acting skills. Also of note are Neimah Djourabchi as the affable and intelligent Peroutka and Tandy Cronyn as the ill-tempered but brilliant Rossum. Unfortunately, Jorge Cordova as Karel and Brittany N. Williams as Helena never develop much of a chemistry, which makes their relationship seem more like an afterthought in the play, and their creations feel one-dimensional.

My criticisms of Rogers’ work are not meant to suggest that Universal Robots is a bad play – overall it is actually quite enjoyable, but I am unconvinced that the most compelling aspects of the show are attributable to Rogers. Rather, much of the captivating content in the play may actually be attributable to one or more artists who came before Rogers, which calls into question the value of this particular work.

*The rules are simple. A robot may not harm a human or allow a human to be harmed. A robot must obey all human orders (unless the order involves harming a human). A robot must protect itself, unless doing so conflicts with the first two rules.

**Other works include, for example, John Sladek’s The Complete Roderick and James Hogan’s Code of the Life Maker.

*** I, Robot is also the title of a short story by Eando Binder, which came out before Asimov’s novel.