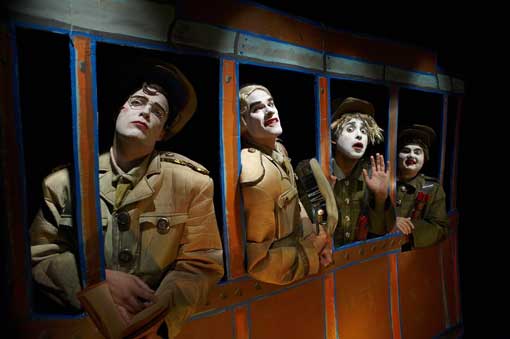 On Stage in TO: Blackout.

I have only 4 rules when it comes to great theatre:
– make it coherent
– make it honest
– make it mean something
– limit blackout set changes
That’s it. That’s all I ask.

The following three companies refuse to adhere to this final point with their current productions and it’s perhaps telling that the only company (of those listed but also in general) that makes such defiance work for them is also the only one that succeeds across the board.

The Great War (VideoCabaret/Soulpepper)
VideoCabaret gets a pass on their prolific use of blackouts for both technical and stylistic reasons. There are other companies, though few and far between, that execute blackouts well enough to not annoy me (lightning speed, no visible stage hands) but no one is as precise as VideoCab. Far more important, though, is the fact that VideoCab’s blackouts serve a purpose; they’re a style choice, a key component of the company’s larger-than-life quick-cut “video” aesthetic, the opposite of the symptom of unimaginative direction blackouts usually are. VideoCab’s style is thrilling and bizarre the first time you see it but tends to deliver as-expected once you get used to it. What’s therefore most interesting about The Great War are the moments when the subject matter seems at odds with the company’s usual irreverent, distanced tone. Once you get past the parts of act one where the double casting and short scenes make the logistics confusing and the characters difficult to remember, The Great War is a lot more tragic than the more strictly political plays in the History of the Village of the Small Huts (like last year’s Trudeau & Levesque). The clownish caricature look of all the actors in their makeup and wacky wigs regularly gives rise to hilarity like Mac Fyfe’s show-stealing performance as a megalomaniacal Governor General and a lovesick soldier but it’s more clear than ever that VideoCab is special when the tragedy of the story really hits home (like a scene with Jamie Cavanagh’s injured soldier who can’t remember his own name), despite the inhuman surroundings.

The Terrible Parents (The Cabaret Company)
On the flip side, The Terrible Parents is a good example of when style gets in the way of good storytelling. Playwright Sky Gilbert is armed with an intriguing story of parental psychological warfare but he hides it under layer upon layer of distancing meta-theatricality and silly tricks. To represent a change she undergoes in her life, the mother character is played at first by Ed Roy before transforming into Gavin Crawford who is the one cast member able to marry the play’s outlandish dramatics with the story’s tragic reality (he plays the father figure in the first act to great contrasting effect). Crawford’s performance is the whole reason to see The Terrible Parents, a production otherwise riddled with awkwardly stilted, broad performances and blackout set changes that add nothing but time and tedium.

The Dialogues of Leopold & Loeb (Labyrinthus Mundi)
This new play by Brad Walton  should be an hour shorter than it is. The blackouts are interminable, adding what felt like at least ten minutes to the play if not longer. There are an overwhelming number of scenes that could be cut with zero consequence to the story or the characters and the pace is in desperate need of a pick-up. Though the detailed parlour design gives a strong sense of time and place, something simpler and less concrete would allow more fluid transitions (and spare us the dreadfully literal “outdoor” sets). An even better solution would be a focused rewrite that leans into what works about Walton’s troubled (accidentally anachronistic?) script and eliminates the filler. Just trap the troubled, co-dependent pair of lover/conspirators in a single room and let their sexual tension and power imbalance push them past the point of any recognizable sanity and towards absolute self-destruction. It’s a fascinating story, unfortunately badly told and badly acted and interrupted very regularly by long periods where the audience just sits in the dark, waiting for the actors to change their hat.