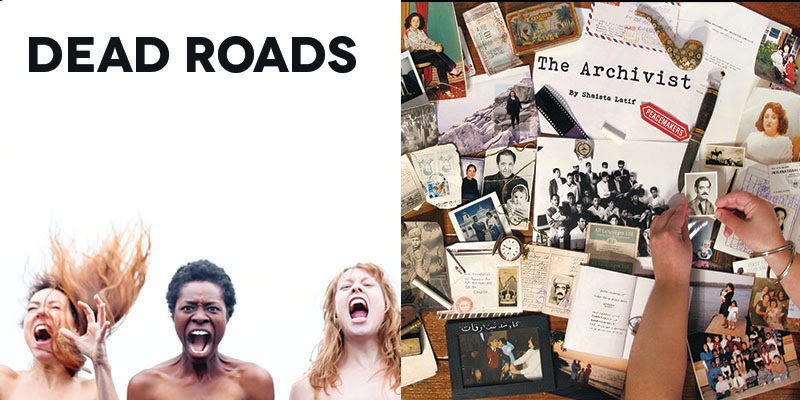 The Archivist as a title for a performance piece suggests an exploration of a reserved, organized and knowledgeable figure. It can also suggest someone with a degree of detachment from the material they are curating; when I think of archivists, I think of slightly senior employees who labour away in the bowels of an institution, overseeing with both passionate and clinical authority the mounds of documentation which they have been charged with preserving. And indeed Shaista Latif, in her one-woman work, adopts an approachable and poised persona for much of her show – but it is a veneer which she elegantly and determinedly chips away at as the piece unfolds, the first of two strong and enigmatic productions staged in conjunction in the extra space of the ever-reliable Theatre Centre under the aegis of WhyNot Theatre.

When we enter the theatre, Latif is there to greet us, and invites us to observe and pinpoint birthplaces (real and imagined) on a triptych of maps pinned up on a nearby wall, one of which features her face sketched near-seamlessly into a depiction of the entire globe. It’s a straightforward but effective gesture to the theme of intertwined personal and global history, a familiar trope which Latif proceeds to smilingly and decisively skewer in the hour that follows. Using home video projections, photographs (taken on real film, not printed, as Latif pointedly reminds us), some simple but effective lighting designs (overseen by Andre du Toit, with technical direction by Pip Bradford and Rebecca Vandevelde), Latif has structured the piece so that it exists somewhere between a presentation and a conversation with the audience. In the first half especially, Latif, rarely more than ten or so feet from the assembled spectators, encourages questions, plays games, and hands around the aforementioned photographs.

This engagement with audience isn’t cloying – – Latif has such a warm, confident presence and has set the scene so intriguingly that you look forward to her responses, housed within her calm, smiling ease. She answers questions and adapts to any situation that may arise with gentle spontaneity and ease. Such approachability of course quickly reveals a deeper layer of anger and mild disdain underneath, a note that Latif effectively hits several times, though which occasionally, as in when she suddenly says for the third or fourth time some variation on “I don’t fucking care if you like it,” can become a little repetitive. De-stabilizing the audience and making them re-assess what they’re watching depends I think on a greater sense of unpredictability and surprise. For the most part however, Latif is very adept at keeping us on our toes.

The daughter of immigrants who came to Toronto from Kabul, Latif outlines a childhood spent being shepherded from Scarborough to Weston, all the while feeling increasingly unrooted both from her family and the areas where she lived. To reveal more about where her story goes would take away from the experience of watching it, not because the piece turns entirely on the revelations of Latif’s narrative, but because the attention and curiosity of her audience is so crucial to the energy of the work.

Indeed, once the show was over, I wished I had taken the opportunity offered by Latif to ask more questions – – we’re certainly left with many. But that’s Latif’s intent, I think; to welcome us into her life with the smiling beneficence of an experienced museum guide before making us understand that the pain of displacement and mental deterioration can’t be fully excavated and explained, and that we miss opportunities for understanding at our own peril. At an hour, the work grants us a glance into the archives, not a lengthy exploration. The rest is up to us.

Dead Roads, by contrast, is a title that connotes unremembered lives, paths that have turned cold and lost meaning. But in the strange burst of magic that closes the play’s story, director Clare Preuss and her very able cast suggest that it’s in these under-explored areas where the most unexpected and powerful connections can be made. Before that finale, we follow three mostly separate story strands set in Fort McMurray, each lead by one member of the show’s three-woman cast, who developed the piece with Preuss as apart of the Dead Roads Collective.

First there’s Zoë Sweet’s bartender, charismatic and passionate, who has a capacity for empathy which she only gets to express with animals and insects whom she continues to either inadvertently hurt or save throughout the day. When it comes to humans however, we sense a struggle. Next is Neema Bickersteth’s haul truck driver, a shy and thoughtful woman with an affinity for karaoke who is working in the oil sands after escaping a failed marriage. Finally there’s Darwin Lyons’ butcher, who spends her day negotiating the mounds of pork carcasses in her freezer while fending off customers determined to haggle. These three monologues are interwoven throughout the hour, with all three women onstage at all times, sometimes physicalizing aspects of the story being told by the spotlit woman, and other times simply watching the person speaking. Occasionally, a fourth voice enters the fray, that of a radio news announcer detailing the aftermath of a mysterious car accident.

The overarching story that emerges is one of loneliness and the quiet, desperate focus attendant to three women living and working alone in an area plagued with a tenuous economy. It’s a compelling and refreshing angle to take on a very current Canadian issues, but at times it can feel a little underdeveloped. Perhaps it’s superficial to expect more satisfying narrative interaction between the characters, but the inherent interest of having these three actors onstage together brings with it the expectation of a firmer connection made between the characters at some point. The play appears to be building up to a revelation of some kind, and when it comes it’s certainly both strange and moving, but it’s also abrupt and brings the show to a sudden close; the co-creators are perhaps a little too willing to throw up their hands and let the mystery be.

Still, Preuss has structured the hour effectively, and her performers are very strong. As the truck driver, Bickersteth displays a fumbling shyness that shades her description of the very different life she lead before coming to the sands. She also has a gorgeous singing voice which she gets to show off in a euphoric performance of Tammy Wynette’s “Stand By Your Man”. Lyons is firm and pragmatic, bringing a skillful edge of farce to her busy and stressful day. Sweet is extremely poised with a strong presence, though sometimes her energy feels more in keeping with the passionate declamation of a Greek tragedy, and so occasionally feels a touch less intertwined with the other two performances.

The set (again housed in the Theatre Centre’s back space) is simple and mostly bare, with a ramp dead centre serving as a way of adding levels to the activity and suggesting the gradual, almost subliminal connections that will be made between these characters. Tech work is strong, with especially effective work coming from Maddie Bautista’s sound design and Constanza Dávila’s sound engineering. They create a beguiling aural landscape that gives a strong emotional framework to our walk down the roads these women walk.