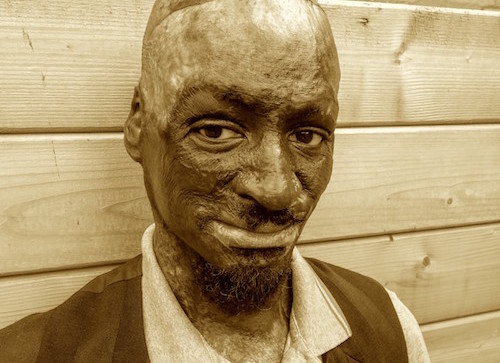 In 2012, George Brown theatre school grad Prince Amponsah’s apartment caught fire, his catastrophic burns resulting in three months in a coma and the amputation of both of his arms. In 2015, he returned to the stage in Desiderata Theatre Company’s simple and stirring vision of Lot and His God. Prince played the angel Drogheda come to warn Lot and his wife of the impending destruction of their home Sodom. It was a triumphant second debut, an Outstanding Supporting Actor-nominated turn, and the first appearance of a powerful new performer.

Can you remember the first theatre production you ever saw? When did you know you wanted to be an actor?
The first production I can remember seeing was a children’s theatre production of Charlotte’s Web during a school trip in Grade 2. It was years later when I was 12 that I decided I wanted to become an actor. I’ll admit it was specifically after watching Face-Off starring John Travolta and Nicholas Cage, these guys are known for embellishing roles, especially the latter gent but geez they looked like they were having so much fun doing it and I wanted in on the action.

How did your experiences at George Brown shape you as a performer?
George Brown helped me hone my skills and create the discipline a performer needs when developing a story or character. Other than reading classical text in high school english class I didn’t have much experience with classical works before George Brown so their knowledge and expertise were vital. But even still some things cannot be taught, only learned through experience.

Your nomination this year is for Lot and his God, which was a return to the stage for you after being severely injured in a fire in 2012. Was the chance to perform again something that helped drive you during your long recovery or were you planning to leave theatre behind?
The thought of performing again was the last thing on my mind during my road to recovery. I was definitely going at it day by day. It wasn’t until about 2014 once I was more settled with a regained sense of confidence that I began to toy with the idea of acting again.

How did you find your way back?
It was from a chance meeting through a mutual friend that I ran into Harrison Thomas, whom I hadn’t seen in years. We talked about my possible interest in acting again and he expressed that he had a play he really wanted to work and an interesting role which could be well suited to me. A few days had passed and I honestly thought nothing would come of it, just shared thoughts that wouldn’t come to fruition but sure enough I get the call and the play sent to me which was Lot and his God.

Your character in Lot and his God was an angel. In what ways did you harness the realities of your experience and new physicality to shape Drogheda?
Well, in my case, there is no way to mask or ignore my physicality because it is so apparent. This forces me to embrace my physicality which has been an interesting challenge. But in the case of Drogheda, he is an angel which to me meant he wouldn’t have the same connection to a human body as regular mortal would. I think it takes an interesting turn when you realize Sodom was destroyed by fire, it can be interpreted as God’s image of what will come to be of people of Sodom.

What are some of the biggest challenges of performing with your new physical limitations?
There are the obvious limitations of anything involving dexterity because of the loss of my limbs, especially when it’s written in the directions of the play and vital to the telling of the story. There is also the fact that I may not have the opportunity to play certain roles simply based on my appearance. But this is the challenge I’m willing and looking forward to taking on. This about bringing more diversity onto the stage and screen. I think we’re more than ready for it, we just have to be willing to provide more opportunity.

Tell us about working with director Harrison Thomas to develop your interpretation of the character.
Harrison was amazing to work with. He’s got such a weird, creative brain with the gears always running. He had incredible knowledge about the text and the works of Howard Barker which is absolutely essential when immersing yourself in the world of Howard Barker. We gained insight into his school of thought and from day one, the rehearsal process was always open and inclusive. We all discussed our roles and objectives immensely.

Did you do much research into the biblical stories that inspired the play and other representations of heavenly messengers like Drogheda?
Of course, I was raised in a Christian family so bible study was nothing new to me. Especially if you want to understand the wrath of God, the Old Testament is a highly recommended read.

You had incredible chemistry with Stefne Mercedes as Lot’s Wife Sverdlosk. Tell us about working with her to develop that very careful dance of love and hate.
I feel very fortunate to get to work with Stefne who approached the work with fearlessness. What worked for us was being completely open, honest and understanding of each other throughout the process.

Your character was at times incredibly brutal and cruel to Tayves Fiddis’ Lot and, especially, Andrew Pimento as an innocent waiter. Did you ever find that level of darkness difficult to summon, or recover from?
I may be one of the least confrontational people you’ll meet. So going over to the dark side was not a very good feeling. I would always feel a little icky after each show and sort of feel the need to shake it off. But at the same time that’s what made it so much fun because the character was so unlike me.

You recently closed the world premiere production of Brandon Crone’s Contempt at the Storefront Theatre in which you were confined to a wheelchair and only able to communicate with your eyes and your breath. Within those massive limitations, what were some of the ways you were able to telegraph to the audience who Freddie was and what he was feeling?
The eyes can be extremely expressive which is something I realized even more in this production. But besides that it was the inner dialogue of the character that manifested through the eyes and breath. Really experiencing what the character was going through and not having the ability to move or speak to express that and the fight to find ways to communicate.

Do you have any dream parts you’d like to play one day? Has your disability altered the list or have you begun dreaming up ways to redefine classic roles to work for you?
I would love to tackle Richard III or Othello at some point in the future and yes I definitely intend to redefine the classic roles, tweak them a bit to work for me.

What are you doing now/ what’s your next project?
I’ve got some downtime until I start work on an adaptation of Thomas Middleton’s and William Crowley’s The Changeling with Desiderata Theatre Company in which I’ll be playing the character De Flores, once again under the great direction of Harrison Thomas.

Do you have anything you’d like to add?
I would like to thank My Entertainment World for this interview and I am very grateful to be nominated for my work. Also, a big shout out to all my friends and family in the theatre, your support is truly empowering. Thank you.