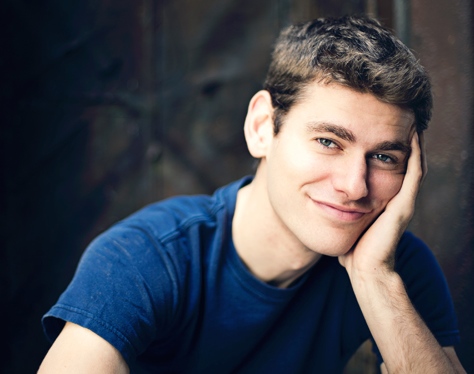 When Ale House Theatre regular Tayves Fiddis suggested to director Joshua Stodart that he’d like to play Iago, his response was “But who would believe a guy like you would… Ohhhhh. Perfect”. The combination of Tayves’ good guy image and incredible charm made his Iago particularly lethal and the audience particularly culpable in his crimes because he had us rooting for the villain to win from his very first line.

Can you remember the first theatre production you ever saw?
My first vivid theatre memory is seeing Showboat in Vancouver when I was a child. I don’t remember very much, mainly being amazed by the set and the performance of Old Man River. It was also one of my first times being really confronted with issues of race, and that experience still resonates with me.

How did you develop as an actor?
So far, I’ve studied in Vancouver and Toronto at Capilano and Ryerson Universities respectively. Since then my development has been through performing and producing with indie groups in Toronto and working with some of the smaller companies. I think that the variety of roles I’ve had the opportunity to work on has been a huge boon to me as an artist. Just this past year I was able to work on four vastly different shows, three as actor, three as producer and one as director.

What’s your favourite role you’ve ever played?
Iago is definitely one, but I think my favourite was Georg Büchner’s Woyzeck. I had the chance to play it in college and it was a fantastic and challenging experience. It’s about a somewhat disturbed soldier who believes his lover may be cheating on him. His jealousy leads him to murder her; he then falls into madness and eventually drowns himself. It’s an incredibly odd play and character, who has a lot of similarities to Iago now that I look at it.

Do you have a dream part you’d like to play one day?
There are a number of shows that I’m interested in performing, but no one role at this point that I would single out.

You’ve been with Ale House Theatre since the beginning. What keeps bringing you back to Shakespeare and this specific company?
It’s the people, and Joshua especially. He’s an amazing force of a person, and a great collaborator. I’ve been inspired working with him and have always wanted to support him and the company. Luckily for me I’ve been able to do so. Every show with Ale House has been a lot of fun to work on and I look forward to the next.

In his interview, your director Joshua Stodart told us that playing Iago was your idea. What drew you to the role?
I’ve always found being the bad guy compelling, and I love the challenge of making a villain sympathetic or understandable for the audience in spite of horrible actions. Iago is a great example of this kind of character. He does despicable things, but at the same time he can be very compelling.

He also mentioned that his reaction was “But who would believe a guy like you would… Ohhhhh. Perfect”, which I took as him saying you could get away with murder. So, two questions:

1) How did you take advantage of that innocent-seeming quality in your performance as one of the most ruthless villains of all time?

2) If you could indeed get away with almost any crime, which would you commit and why?

1) It’s very important that the audience believes that the other characters have good reason to trust Iago at the outset. I think we tried to draw upon those qualities to make that feasible. He’s honest, well intentioned, earnest, genuine, and he’s unafraid to voice unpopular opinions which makes him a valued voice of reason. When the audience gets to see and believe that, then his betrayals can be truly sickening.

2) Yeah, I don’t think I can answer that. Part of me says I’d go all Robin Hood, steal from the rich to help the poor. It’s super unlikely, but hypothetically.

So you’re handed a mammoth role like Iago- where do you start?
I read the script and my OED’s a lot. We had the luxury of doing table work and then having a month before rehearsals started, so by the time we got in the room I was off book for a considerable amount of the show. This helped significantly, but it was hard to break some habits that I’d formed. We watched several versions of the show as well and there’s also a great BBC series called Playing Shakespeare by the RSC. You can find it on YouTube and I highly recommend it.

What was it like working with Josh throughout rehearsals? How did his ideas about the role mesh with your own?
Josh gives a lot of freedom to his actors, and strives to build the show with you. He’s very open and playful as a director so you can really take risks. He and I talked a lot before, during and after rehearsals. We always seemed to have fairly similar ideas about Iago, although I’m sure we disagreed on some points.

Iago gives a plethora of excuses or possible explanations for his treachery. Were any of the given possibilities true for your Iago? If not, what was motivating him?
In our production we came to an understanding that his stated motivations could overlap to drive him to his treachery. I think that what points to it most is how Iago intentionally drives Othello to the same jealousy and suspicion that he claims to feel himself.

Iago is the only character in Othello who has a strong relationship with the audience. How did that factor into your performance?
It’s one of the most fun parts of the role. Because he has the strongest relationship with them, they sort of end up being complicit in it all.

Did you have a favourite moment in the production?
There’s one point where Iago first receives the infamous handkerchief from his wife Emilia (Andrea Brown). In our production this ended with Andrea being backed sensuously up to the door before I unceremoniously dumped her out of it. We only found this during our tech rehearsals and it always made us smile at how deliciously deceitful it was. It also became a turning point for their relationship.

We saw you in two other shows in 2015- Lot and His God with Desiderata and Ale House’s Twelfe Night remount where you returned to the role of Duke Orsino. What can you tell us about your experiences on those productions?
They were both whirlwinds and extremely fun to be a part of. Twelfe Night was my first time remounting a show and it was a nice opportunity to look at it all from a new perspective, and Fringe always carries a wonderful spirit with it.

Lot and His God was a short, but very demanding piece. Prince [Amponsah], Stef [Mercedes] and Andrew [Pimento] gave so much of themselves and it was a pleasure to work with them, and Harrison [Thomas, the director] came to the table with interesting ideas, energy and knowledge.

What are you up to now/next?
Right now I’m helping out with the Terra Incognita Collective as they develop a mask based collective creation piece to be performed in June, and before too long I will be heading out to Cape Breton with my wife, Courtney, to work with the Highland Arts Theatre in Sydney for the summer.

Do you have anything you’d like to add?
Congratulations to all of the other nominees! And thank you so much for putting this all together and supporting the community. Here’s to a fun and artistically full 2016!