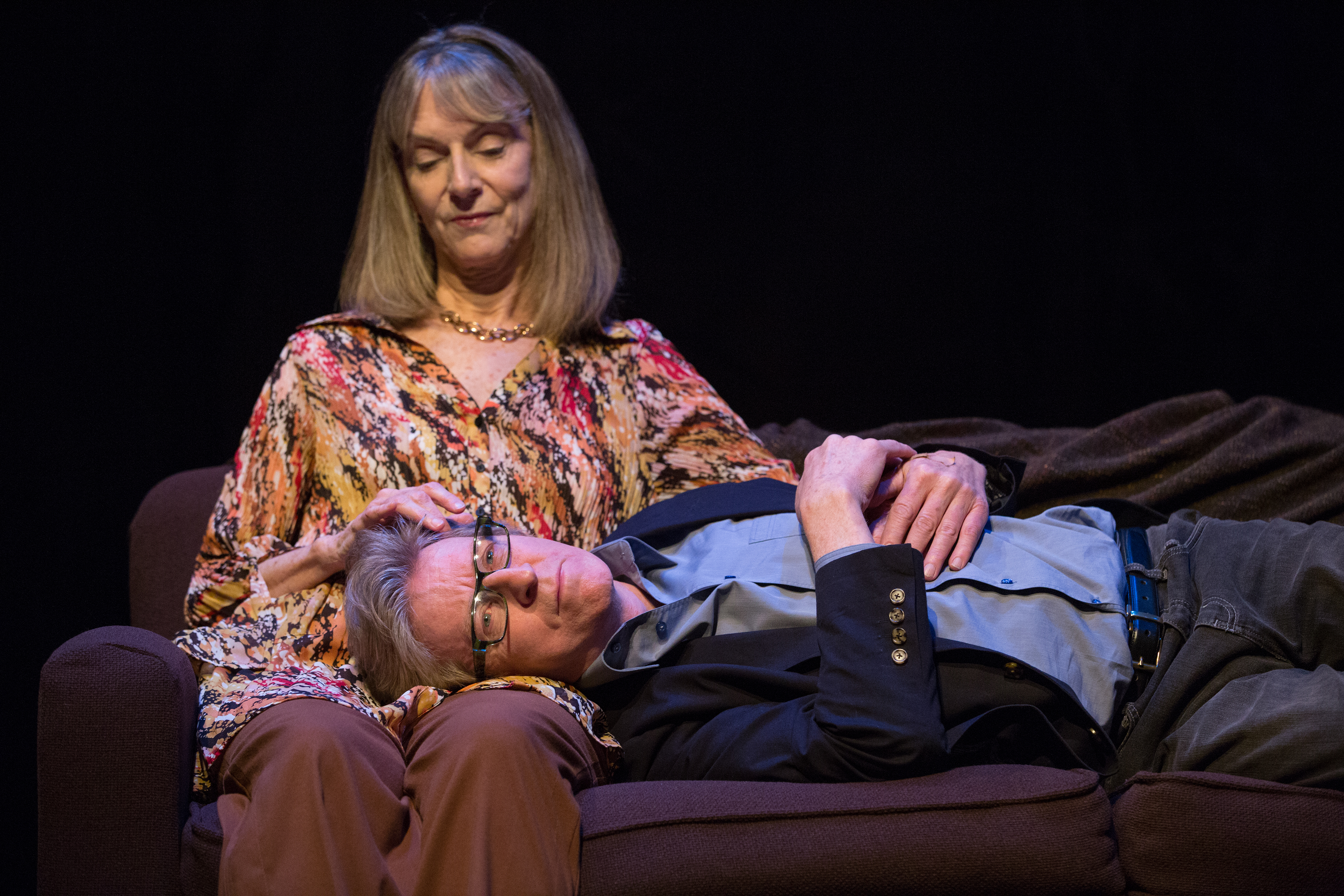 On Stage in TO: Death & Descent

You Will Remember Me (Tarragon Theatre/Studio 180 Theatre)
The Toronto premiere of François Archambault’s play (translated by Bobby Theodore) about a man with encroaching memory loss (what is presumably Altzheimer’s is only ever referred to as “the disease”) is well-staged by a strong cast and smart, simple direction with an evocatively intangible set design by Denyse Karn. Though I appreciated his character storytelling, Archambault leaves a lot of empathy on the table with a very straightforward structure and strong sense of reality, letting the audience into Edouard (RH Thompson)’s confused mind only once with an ambiguous appearance from Michela Cannon possibly playing a character other than the one as which she is billed, but possibly not. I wanted more of a stylistic window into Edouard’s perspective, something like Peter M. Floyd’s use of muddled language in Absence, Hilary McCormack’s disorienting character transitions in Hanger or the over-stimulation of the lighting and sound design of The Curious Incident of the Dog in the Nighttime. In the absence of such a device, the play might be stronger if told more from the perspective of one of the characters similarly locked out of Edouard’s experience (his wife Madeleine seems a particularly underexplored presence full of main character potential). Beyond the issue of perspective, the dream of Quebec sovereignty and retired professor Edouard’s memory are paralleled perhaps a little too forcefully as the theme of “slipping away” gets hammered over and over (also slipping away- Nancy Palk’s Madeleine from her husband, Kimwun Perehinec’s Isabelle from her parents) but in the simplest moments of small, personal tragedy, it’s impossible not to be touched by Edouard’s plight.

Richard III (Wolf Manor Theatre Collective)
I like Wolf Manor. I like their off-the-pedestal, physically engaged, deconstructed approach to Shakespeare. I like their continued interest in female directorial voices, small ensembles and gender fluid casting decisions. I like that they’re ambitious and uninhibited and imaginative enough to set Richard III in the animal kingdom. But sometimes ambitious, uninhibited and imaginative people need an editor, an outside eye who wasn’t in all those thrilling early concept meetings where an idea gets compounded by mob mentality excitement and results in Rivers and Grey grooming each other like cats at the foot of Elizabeth’s throne. There are moments when director Mallory Fisher’s animal kingdom concept works brilliantly- Dylan Brenton’s Catesby carries out assassination orders by ripping out his victim’s throat with his teeth; the survivors feast on Richard’s corpse after the final battle- but there are too many moments when it just seems silly. The company’s most capable members (Emma Anderson, Brenton and Meghan Greeley in particular) are able to hint at the intellectually evocative concept without moving into Munkustrap territory but the ensemble is so uneven that there’s always someone on stage to bring disbelief roaring back into non-suspension whether it’s with atrocious overacting (face pulling and screeching are not uncommon) or just plain bad casting (I’m all for a female Richmond but Jade Douris’ bubbly, yoga outfitted version is an unconvincing threat). Which brings me to Richard himself, a tale of two performances. The trouble with casting Jeff Hanson as Richard III is that a classically handsome, very physical performer (he’s co-fight captain) can’t deliver the line “I, that am not shaped for sportive tricks” believably unless he plays up the deformity to almost comical proportions. And so he does- hunched over to the point of delivering most lines to the floor, a limp so pronounced he seems to be modeled after the cartoon version of Quasimodo. On the other hand, the reason to cast Jeff Hanson as Richard III is that he’s simply good with Shakespeare and, as the play goes on, he eases out of the over-the-top deformity and we begin to finally feel the impact of a strong performance when there’s not as much standing between the actor and his text. The gradual straightening of Richard’s back and strengthening of his gait is, however welcome, never explained and he doesn’t revert back as he starts to lose his power as I expected he might (a “the weakness is really in his head and power makes him feel more physically capable” angle was the best explanation I came up with; it does not appear to be the chosen course here). Like the animal kingdom concept, the treatment of Richard’s deformity is kind of confusing and at times an unnecessary overreach but the right actor makes it work, at least during the scenes when we can actually see him, not just a hunchback.

Still (Binocular Theatre)
Still is an absurdist retelling of a true story, an adaptation of Lisa Heineman’s memoir about stillbirth. It’s a real person’s very real tragedy and therefore something that’s very uncomfortable to criticize. I felt genuinely bad that the only emotion I felt was guilt over not feeling more. It’s difficult to pinpoint why Still is so hard to connect with. Is it- as the mother played with forced punk rock grit and organic depressive anger by Annemieke Wade asserts- because an outsider can never really understand her grief? Perhaps. Is it playwright Jen Silverman’s wacky extrapolation of Heineman’s emotional journey into over-the-top hijinks involving BDSM and dead baby jokes? More likely. Christopher Allen’s wide-eyed wonderment as the dead baby in question is a memorable, likeable performance but Silverman’s text blocked out reality too forcefully for my empathy to really kick in.