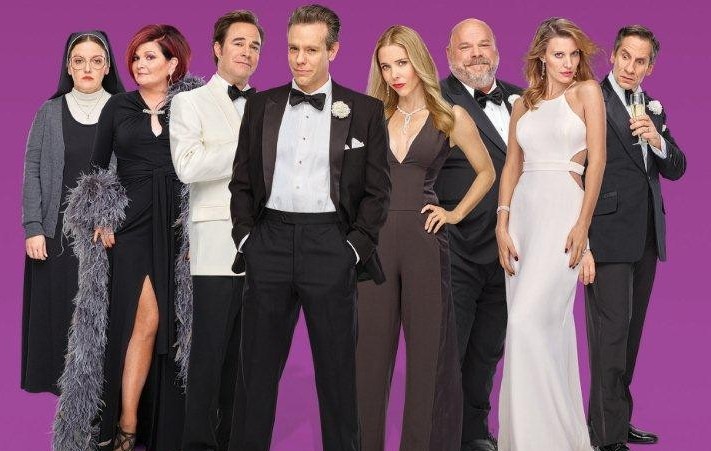 The only way that Seth Rudetsky and Jack Plotnick’s former off-Broadway musical comedy Disaster! could succeed on a Broadway stage is if it thoroughly embraced its own absurdity. Thankfully, Disaster! does just that, and the results are a guffaw-inducing two-hour romp through insanity dressed up in garish 70’s attire. This musical tribute to terrible calamity films is silly – a lighthearted and enjoyable mixture of mindless fun and fabulous design. It is not spectacular or groundbreaking in its parody-efforts, but it is solidly entertaining.

Set in the 1970s, Disaster! recounts the ill-fated opening night of Tony Delvecchio’s (portrayed by Roger Bart) brand new gambling casino, the Barracuda, affixed to Pier 54 in New York City. Joining the crew aboard the floating sin city are bachelor buddies Chad (Adam Pascal) and Scott (Max Crumm) who are catering the opening, a guitar-toting nun named Sister Mary Downy (Jennifer Simard) who wants to save the souls aboard the ship despite having a repressed gambling addiction, investigative journalist Marianne Wilson (Kerry Butler) who suspects the ship’s owner cut some corners during construction, a down-on-her-luck former diva named Levora (Lacretta Nicole) who carries her dog as an accessory, a ditzy blond lounge singer name Jackie (Rachel York) accompanied by her precocious twins Ben and Lisa (Baylee Littrell), a loving couple celebrating retirement, and a brainiac academic named Professor Ted Scheider (Seth Rudetsky) who endeavors to save the ship from certain doom (eh . . . disaster).

As the guests get their bearings aboard the ship, hustling their way through night clubs and gambling floors, Chad runs into Marianne who broke his heart by leaving him stranded at the alter. As the pair rekindles their relationship, Professor Ted Scheider warns Jackie and Tony that the dancing, gambling rituals and general rumpus aboard the ship are certain to cause a horrific earthquake. After Tony refuses to listen to the professor, the passengers are faced with a disaster of catastrophic proportions. Explosions. Piranhas. Floods. Rats. Sharks gnawing on limbs. Ice sculptures cascading down and chopping women up into tiny pieces. You get the picture.

Disaster! works because it revels in its own stupidity – never shying away from visual gags, bombastic dialogue, cheesy over-acting and, of course, jukebox melodies that are woven seamlessly into the story. Given the reaction in the theatre, I suspect that the introduction of many of the songs into the plot is funnier if you recognize the music. Unlike many of my fellow theatregoers, I am a child of the 1990s with a spectacularly limited knowledge of the discography of Donna Summer, Lionel Richie, Clifton Davis, and Carly Simon (and those are merely the names of the few artists that I actually recognized in the Playbill). While most of the musical interludes were unfamiliar to me, I appreciated the cornball lyrics nonetheless and had no trouble discerning the writer’s rationale for selecting the songs in question – after all, what is a show entitled Disaster! without a rendition of I Will Survive?

The set designer Tobin Ost clearly had fun with Rudetsky and Plotnick’s book, outfitting the stage in flashing lights, disco balls, and tacky wood paneling that moves topsy-turvy on command – flipping, falling and exploding across the stage at moments of catastrophe. The only failure in Ost’s set design, coupled with Plotnick’s stage direction, is that there are periods of time when certain set pieces are difficult to view from seats that should have perfect sightlines. For example, one particular visual gag involves some feisty piranhas in a decorative fish tank; however, from my seat near the center right aisle, my view of the fish tank was obscured by both an actor and an oddly placed pillar in the middle of the stage. William Ivey Long’s costumes are on point with bold patterns, bright colors, and the most hideous designs imaginable (courtesy of 1970’s fashionistas),* and Paul Huntley similarly aces the period hair design.

Also embracing the madness is the entire cast of Disaster!, which is comprised of a band of Broadway veterans. Returning to the Nederlander Theatre for the first time since departing Rent, Adam Pascal proves that he still has the vocals and the charm to win hearts as a leading man. Roger Bart, Faith Prince and Max Crumm each have their fair share of stand out comedic moments; however, it is Rachel York as airhead Jackie, Jennifer Simard reprising her role as Sister Mary Downy and newcomer Baylee Littrell as Ben/Lisa that steal the show. York embodies the idiotic but kind-hearted Jackie so whole-heartedly that it is difficult not to root for the character. Also, York and Littrell have established a tight repertoire that allows Littrell to transition between Ben and Lisa, often right on stage in front of the laughing audience, and maximize the punch line each time that he reappears as one twin or the other. Littrell is a true discovery – a fine young actor with an undoubtedly bright future on the stage. Jennifer Simard similarly shines as a soft-spoken nun who transforms into a crazed exhibitionist gambler, engaging in some very provocative dance moves with a Hawaii 5-0 slot machine. Simard has crafted a hysterical woman in Sister Mary Downy, and one could easily see her as a reoccurring character on Saturday Night Live.

Broadway gets its fair share of serious subject matter and family-friendly shows, but it is rare to find hilarious and lighthearted entertainment for adults on the Great White Way. However, Disaster! is just that: an unremittingly and unapologetically ludicrous musical that goes out of its way to display its shortcomings to the audience. For its part, the audience is generally happy to indulge in the farce with plenty of grins, laughs and applause.

* Jackie’s hyper-sequined jump-suit that slowly disintegrates into a Barbarella-ish rag is particularly inspired.