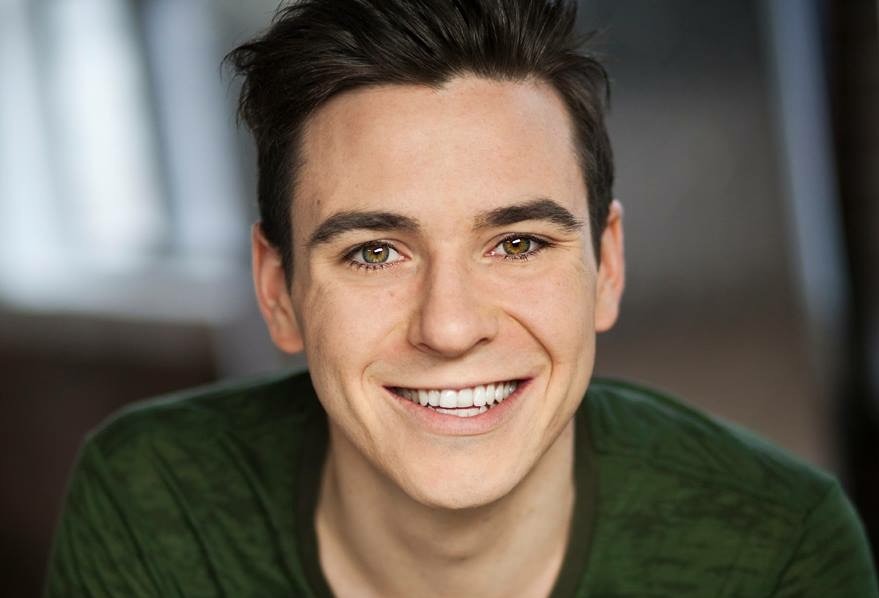 Danik McAfee appeared in two different productions of Cabaret in 2015. In the second- First Act Productions’ intimate chamber version of the classic musical- he took on the iconic and enigmatic role of the Emcee which earned him a nomination for Outstanding Performance in a Musical in this year’s Toronto MyTheatre Awards.

Can you remember your first experience with theatre?
My first experience goes back to when I was 12. With my family not being involved in performing arts whatsoever, I was never introduced to it – until my best friend at the time convinced me to do a musical theatre summer camp at Artishow, which is a school back in Gatineau. It was two weeks of intense training, followed by a performance. My first musical was Le Big Bazaar. Those two weeks were an incredible experience. I discovered a new me and knew that I wanted to do this for the rest of my life. It was the best moment for the young teenage me. It gave me confidence, purpose and a new path.

What are some of your favourite musicals?
That’s a tricky question! I would say anything Kander and Ebb because I love how they tell their stories through eccentric and intriguing characters, supported with an amazing score. Of course Cabaret is my ultimate favourite! I also love Nine by Maury Yeston with its hypnotizing overture, La Cage Aux Folles, How To Succeed In Show Business Without Really Trying, Beauty and The Beast, Cats… this list could go on for a while!

Where did you develop your triple threat skills?
I started my training as a teenager at Artishow which is a very accomplished music theatre school back home in Gatineau. They help young passionate artists to develop their skills and pursue a professional career. They are the ones who encouraged me to go to Saint-Thérèse, where there is a professional musical theatre program at Collège Lionel Groulx. Upon completing my training there, I still felt I had more to learn and I wanted to work in English. I auditioned for Randolph Academy, was accepted, learned English and moved to Toronto. Randolph really made me confident in my skills, and helped me realize what I could bring to the industry. Now, here I am trying to make my way through the industry – and I’m loving every minute of it.

The Emcee is such an iconic character. How did you go about making the role your own?
Honestly, it was really hard because I’m a huge fan of Joel Grey and Alan Cumming and respect what they did with this role so much. It took me a while to really feel and know what I wanted to do with this part. But, when I realized that the Emcee’s character is not that different than my own, it became obvious. Being the eccentric and silly person that I am, I wanted to bring those parts of myself to the role. In addition, I see the Emcee as the narrator of this story so I felt the need to deliver it through emotional story telling.

You were directed by last year’s MyTheatre Emerging Artist Award winner Nicole Strawbridge. What were some of the key conversations you had with her in developing your interpretation of the role?
I love Nicole! She is an amazing director. My key conversations with her would be when I was in doubt. The Emcee is such intriguing character and there are almost no boundaries with him. I wanted to make so many risky choices and Nicole was always there to talk me through them and help me achieve my goals for the Emcee. She is very motherly with her actors and her comfort just brings the best out of everyone. I had the honor to work with her last year in Oklahoma, and having her as a director was amazing.

Tell us about working with the rest of your Outstanding Ensemble-nominated cast.
That crazy bunch! I love them. Like I said, I brought my character on a wild roller coaster ride and the ensemble really supported me. Each time I would propose something to them they were very positive about it and went for the ride. They were such fun professionals to work with. I miss them everyday!

How did the immersive cabaret setting affect how you approached the performance?
I think it really enhanced the experience for the audience and for the actors. The entire venue became our playground and it was amazing. For me it gave me the permission to be part of the story, but it also gave me the ability to go and sit with the audience and observe what was happening on stage. It fed my character so much and it put me through quite an emotional journey. I love that I was able to bring the audience into my world. They were part of the Kit Kat Club as much as I was.

Do you have a favourite moment in the production?
Every moment of that production is my favourite moment. Although one moment that I was always looking forward to was when the Emcee just appears behind the band and lies on the Piano to sing “Married” while Fraulein Schneider and Herr Schultz are getting engaged. That and when I had to play my German 1930’s diva. I loved it!

First Act’s production was actually the second Cabaret you did in 2015. Tell us a bit about Stageworks’ version and how it differed.
Stageworks’ version was awesome and yet very different. I would say the biggest difference was the ambiance and the world of the play. Stageworks really went a very raw and shocking atmosphere. Also, playing it in a proscenium theatre gave off the feeling of the nature of events that occurred during that time. The artistry was beautiful. [Director] Michael Yaneff did great work. In contrast to First Act’s production, we immersed the audience in the Kit Kat club. We surrounded them by the feeling and the ambiance of the club. Also, the “shock factor” was used more during the scenes as opposed to the raw staging of it.

How did your experience with Stageworks affect how you approached the show when it came time to take on the leading role?
Stageworks’ Cabaret really prepared me well. First of all, all of the performers in the show were amazing. We truly developed a knowledge for that show that I carried with me to First Act’s Cabaret. Having done Cabaret the summer before First Act’s production, it really helped me drop into the world of the play and comprehend the stakes of Cabaret. Once I started my second production of Cabaret, I understood the show very well and knew what I wanted to bring to it. Doing both of them right after the other was an amazing experience.

What’s your favourite part you’ve ever played?
Without any doubt, the Emcee – and I’d play him any time soon! Also followed closely by Lumière!

Do you have any dream roles?
Of course I do, I would love to play Hedwig in Hedwig and The Angry Inch, Dr. Frank N. Furter in Rocky Horror Picture Show, Leo Bloom in The Producers, and obviously Velma Kelly in Chicago. I doubt this one will ever happen, but who knows, right?

What are you up to now/next?
Well, after Cabaret, I got offered to be part of the ensemble in GIG The Musical which is a new Canadian musical in the Mirvish season at the Panasonic Theatre. We are all working really hard in rehearsal at the moment and the show opens March 15th. I’m very excited to perform in this show. The music is great and the talent on that stage is outstanding. You guys will also see a very different side of me!

Do you have anything you’d like to add?
I want to say thank you to everyone who supported me and believed in me. Never would I have thought that I would end up in Toronto, working in a field that I’m so passionate about. This nomination means a lot to me and it just proves to me that I’m on the right path and that I’m surrounded by amazingly talented and loveable people. Thank you everyone.