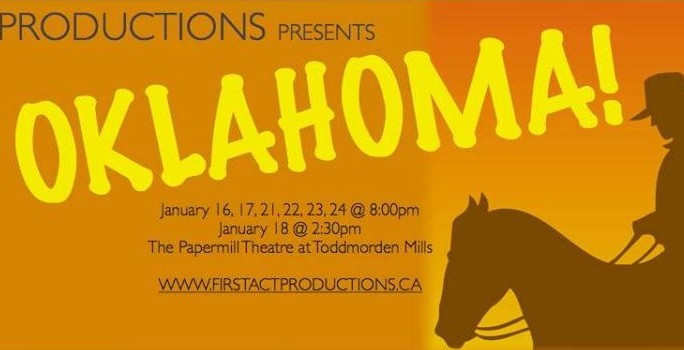 Rodgers & Hammerstein’s at once conventional and bizarre western romance opens with a strapping cowboy named Curly singing about what a beautiful day it is. The first act proceeds down a very charming road from there, full of banter and whimsy, meant-for-each-other lovers, fun dance routines, showy solo numbers and amusing bit parts. Then things go a little nuts. Our feisty heroine Laurey dreams up a worst case scenario around her decision to go to the dance with her aunt’s brooding farmhand rather than the seemingly perfect Curly- what if he threatens her and kills Curly and everything is destroyed? The final scenes of the musical dive into similarly dark territory, turning silly oldschool fun into something fairly randomly upsetting. I could watch Curly and Laurey dance around the possibility of falling in love all day- I’m even happy to put up with the sexually and racially troublesome elements that mire the Ado Annie and Will Parker subplot so long as it’s all fun and games- but Oklahoma! has an inner darkness to it that can’t be shaken. The surrounding action is too bright and fun for the darkness to be poignant or even properly explored so all that’s accomplished by the creepy, violent scenes is that the fun of the rest seems a little too good to be true.

The great humanity Danik McAfee brings to the sad and scary villain Jud Fry is the biggest part of why it’s hard to brush the play’s darkness aside. If the rest of director Ali Richardson’s choices had supported more of a grey area between heroics and villainy, Jud (especially as played by McAfee) could have been a really fascinating figure worth exploring. But Oklahoma!  is written with a Hero with a capital H and I understand the instinct not to challenge him, even if he could totally take it (and maybe deserves it after that truly disturbing scene in Jud’s barn). Though I would have preferred a darker interpretation of the character, Sam Moffatt is ideal as the heroic Curly, his soft-spoken masculinity and casually excellent voice perfectly encapsulating the cowboy mystique that makes Curly so alluring while his charm and sense of humour keep the character’s golden boy arrogance at bay. It helps that First Act head honcho and Moffatt’s real-life partner Nicole Strawbridge is a bold and brainy Laurey who never shrinks in Curly’s shadow and matches him quip for charming quip. The couple also has stellar chemistry which is the key to everything in a show like this. Uncomfortable dream sequences aside, the (reasonably low) price of admission is worth it just to see these two play the adorably coy duet “People Will Say We’re in Love”.

Standout triple threat Luke Opdahl shines once again in the role of Will Parker and his Ado Annie takes the adorable spitfire form of Samantha Bielanski. Christie Stewart is another standout as the one-liner machine Aunt Eller but the rest of the large ensemble gets left behind by the leads in large part because Riley McCoy’s choreography isn’t nearly as ambitious or present as it could be.

First Act Productions is a rare company that still finds value in outdated material, and I love that about them, but outdated material often needs an editorial and directorial hand to translate it for today. Many oldschool musicals are all dancing and bantering and cheesy fun- and you definitely see that again here- but the violence, overt sexism, careless racism, and that haunting scene where our hero, in earnest, suggests that the tortured villain hang himself, these things make Oklahoma! impossible to swallow at face value. A few choice cuts could have gone a long way towards making this production the joyful romp it clearly wants to be. More thoughtful and bold direction could have made it into something really interesting beyond its original intention. As it is, First Act’s strong leading cast is stuck in the awkward space between two better productions.