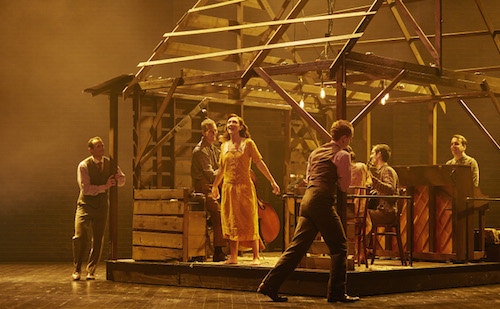 It seems counterintuitive to suggest that a musical can be both overly simplistic and overly ambitious, yet Steve Martin and Edie Brickell’s new show Bright Star has somehow managed to achieve both distinctions. Laced with lulling bluegrass melodies, Bright Star layers platitudes and time-worn themes to create a narrative, which is not inherently bad (many beloved plays explore classic tropes and concepts), but Martin and Brickell fail to bestow depth upon their characters or allow their fictional creations the time to connect with the audience in any meaningful way – leaving the theatergoing experience a hollow one.

Set in post-World War II Asheville and the back country of North Carolina in the 1920s, Bright Star opens with Alice Murphy (portrayed by Carmen Cusack) promising that if you knew her story, “you’d have a story to tell.” Unfortunately, Murphy too often takes a back seat in her own tale. Instead, we are introduced to a fresh-faced Billy Cane (A.J. Shively) who has returned from war ready to follow his bright star – becoming a writer. He leaves his flirtatious love interest Margo for the big city of Asheville, where a stern editor, Ms. Murphy, takes a shine to Billy despite his unpolished writing style. Through a series of flashbacks, Alice’s story of love and loss comes to light. Raised in a religious, blue collar southern town, a forbidden love leaves Alice pregnant as a teenager and, in an effort to save her boyfriend’s budding professional career and reputation, her baby is taken from her as part of a nefarious plot concocted by her boyfriend’s father. Unable to forget her child, Alice joins Billy on a trip back home to discover what happened to her son and learns far more about the pain of her past than she ever expected.

If you have not already discerned the ending of Bright Star from this brief summary, I shall not spoil it for you. To say that it is predictable is an understatement – it is easy to see exactly where the show is headed before Act Two even begins (so much so that I found myself praying that Martin and Brickell would surprise everyone with a more challenging finale – alas, no such luck). However, the playwrights had an opportunity to transform their simple narrative into a lush emotional exploration of character. Unfortunately, any hope of such an exploration was crushed when they decided to pursue dueling plotlines for Alice and Billy. As Alice sings at the beginning of the show, her story is the story worth telling. Hers is the story worth exploring. Billy is, quite frankly, an exceptionally boring principal character. His story can be summarized as follows: young white man comes home from war completely undamaged, sets professional goal, obtains said goal with relative ease and marries blonde sweetheart. It is not exactly groundbreaking substance. However, the time committed to Billy’s unworthy story also distracts from Alice’s far more interesting narrative and deprives the audience of the opportunity to develop empathy for Alice’s plight, ultimately causing her 11 o’clock musical number to fall on emotionally deaf ears.

Moreover, due to the poor pacing of the show, countless revelations and plot developments are crammed into the last twenty minutes of the musical, resulting in a monsoon of clichés washing over the mildly engaged audience. While humor helps to propel the show onward, as one would expect from a book written by Steve Martin, the goofy jokes feel stale (although Jeff Blumenkrantz and Emily Padgett work appreciably hard to sell the groan-worthy shtick that defines their characters). As a whole, the playwrights could have used a heavy-handed and thoughtful editor to trim the fat from their book and lyrics and strip out the repulsive idioms and banal comments uttered by many of the characters (e.g., “a man’s gotta do what a man’s gotta do”).

Bright Star’s obvious weaknesses aside, mingled within the bluegrass musical undercurrent of the show are moments of enticing melody and gorgeous instrumentals. As a whole, the music and lyrics are pleasant, if unmemorable, although the lyrics suffer from an overpopulation of the same trite expressions that afflict the book. Music plays a pivotal role in production, which is indicated by the presence of the musicians on stage throughout the performance. Eugene Lee has crafted a striking set piece – the frame of a wooden house – that actors push around the stage, which carries the musicians across the set as integrated members of the cast. This is one of the few creative aspects of the show that works well.

Ultimately, Bright Star feels like the product of two writers who do not fully grasp the theatrical medium, which is unfortunate because at brief moments throughout the musical, there are flickers of promise. Sadly, it was these brief glimpses of artistry that left me longing for the show that might have been as I exited the Cort Theatre.