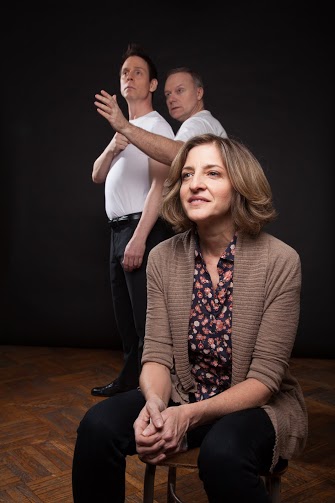 The Further Adventures of… & Adam and Eva

Growing up in the ‘70s, I, like most kids, had my addictive television programs – Lost in Space and Star Trek among them – which made it very easy to relate to Maggie Day, the perky narrator of The Further Adventures of … as she illustrates the time she spent watching her favorite childhood program: Atlantis: 1 Million Years B.C. What makes her recollections even more of a joy are the spirited re-creations of the fictional program’s cheesy action scenes, gamely performed by Tim Burke and Mark Finley as, respectively, Prince Kal and Commander Zoron, the show’s two main characters. But as fun as these scenes are to watch, what makes Further Adventures such a gem are the offstage stories that the playwright, Kathleen Warnock, spins about the make-believe actors who portrayed these characters and how their lives took such diametrically opposite and, in the case of one, unfortunate paths once Atlantis hit the cancellation heap.

Plays that rely on recall as a storytelling device do so with varying degrees of success (the flat revival of Harold Pinter’s Old Times on Broadway being a recent example), but Ms. Warnock employs it well here. Maggie’s fond memories not only take us back to a time when the world seemed safe and clean, we also can’t forget it was during this same period that a generation of those deemed to be “different” were forced into a closet of darkness and shame. As it happens, the “different” categorization applied to Maggie: watching Atlantis helped her comprehend her attraction to girls. While mimicking Zoron and Kal’s action scenes with her best friend, Sandy, she realizes that imaginary adventures on a faraway planet can’t compare with the real rush one gets from fooling around on the playground – the first step of her transition into a healthy, married adult lesbian who later recounts this discovery in her book while looking back on the series.

While writing her book, Maggie discovers new insight into the actors who inhabited the show’s leading roles, Drake Darling (love that name) as Commander Zoron and Frank Gallagher as Prince Kal. Like many actors left to pick up the shards of their careers after toiling on children’s shows, Drake’s and Frank’s lives disperse down separate tracks, with one creating a new life far from the anxieties of Hollywood and the other assuming a more tragic route after he discovered that the industry had no use for him in a post-Atlantis world.* Maggie’s research is greatly aided by Jacob Finberg, the one-time executive producer of Atlantis, who breaks down the fantasy world of the series and reveals all of the good and bad things that went on while Atlantis was in production and after it ended. Dismayed by her discoveries, Maggie envisions the perfect ending to the series in which Kal and Zoron finally release the beast that had been scratching up from beneath the surface of their pseudo-sexual relationship in episode after breathtaking episode. It’s a nice, and very sweet, moment.

As Maggie, Jamie Heinlein is pure charm and her infectious nature makes you feel like you, too, would have loved Atlantis had it been a real series. Mr. Burke and Mr. Finley weave in and out of their TV show characters and into the actors who play them flawlessly, particularly Mr. Finley, who does triple-duty as Zoron, Darling, and the affable Mr. Finberg. In real life he is also artistic director of TOSOS, the theater company presenting Further Adventures, and he should be very proud of this fine production.

The one-act that follows, Adam and Eva, written and performed by Jack McMahon and Yasmin Zadeh, concerns two teenagers with interesting life goals: he wants to be a nun and she wants to be a boy. Unable to connect with other kids in school, Adam and Eva each take to the Internet one night and, encountering one another online, form a bond, confess their innermost secrets (both self-identify as bisexual) and decide they can more easily conquer the world as a team. Meeting up and using fake IDs to gain access into a gay club, Adam and Eva are having the time of their lives, meeting other people to whom they can relate, and realizing that, yes, things do get way better. For each it’s truly a night to remember. What happens next, however, is both sadly predictable and painfully realistic. McMahon and Zadeh are magnetic performers who work their yin and yang like old pros, knowing where the play works best (the Internet exchanges are priceless) and kicking it into overdrive to cover a few of the slower moments (though there aren’t many of those). If you’re into fresh voices with something to say, Adam & Eva will hit you right where you live.

The Further Adventures of … and Adam & Eva were performed at The West End Theater at the Church of St. Paul and St. Andrew, 263 West 86th Street in Manhattan. This production is now closed.

*One can’t help, of course, but think of George Reeves, whose life came to a similar ruinous end following his work as the titular hero of TV’s Adventures of Superman back in the 1950s.