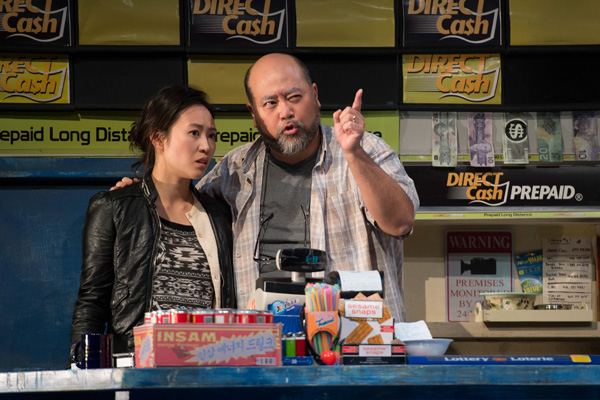 It’s been 4 years since Ins Choi’s play was presented to audiences, and it’s been 4 years that I’ve been wanting to and trying to see this show. On Sunday night, destiny prevailed over work, sickness, procrastination and tardiness and I finally saw Kim’s Convenience in its 5th remount with Soulpepper (at the Bluma Appel).

I tried my best to keep my expectations in check having heard so much praise for the show on top of my own anticipation.

For those of you that don’t know, here is a brief synopsis: Mr. Kim is the proud owner of a convenience store in Regent Park, where he works along with his wife and daughter Janet. In the first scene, a contractor enters and offers Mr. Kim a generous sum for his store. Throughout the play we see Mr Kim wrestle with his options of selling the store and retiring or creating a legacy. We get a glimpse into his work ethic, his life as an immigrant, his relationship with his first generation Canadian children, and how his choices will decipher what his legacy will be.

This touching story, beautifully maneuvered by Paul Sun-Hyung Lee in the lead role, seems to stand the test of time by being simple and from the heart. Lee’s ability to sit in every moment and not throw away lines that could have just been cheap laughs made every moment of broken English that much more hilarious and that much more wrought with sincerity.

I loved the use of Korean in the show—some of my favourite moments were between Lee and Jean Yoon who played Mrs. Kim. Keeping scenes between these two characters in Korean made me feel like a fly on the wall during their everyday tasks, and the power of good storytelling and strong actors left me feeling like I understood every word they said.

While the performances were even, the weakest in the cast is Chantelle Han who plays Janet. Han’s portrayal of a first generation Korean/Canadian young woman just came across as selfish, ungrateful and whiny, which I don’t think was the intention at all. I would have loved to have seen more honest moments that were rooted in her own internal struggle between her values and convictions and her desire to maintain a good relationship with her father. Her scenes with her father as well as with Alex (played by Andre Sills) seemed to lack sincerity and made it very difficult for me to sympathize with her at all.

While I think that the show runs perfectly at 1 hour and 25 minutes, I did feel that there were scenes missing while other moments went on a bit too long. The conflict between Mr. Kim and his daughter Janet seemed to resolve itself, and in place of a resolution scene there was a bit too much slapstick humour, which came across as hokey, like they were pandering to the audience with “the typical Korean father who also happens to be a Korean martial arts master”.

However, my main problem with the show was that the main conflicts that presented themselves early on, which were Mr. Kim’s estrangement from his son Jung (played by Patrick Kwon-Choon), and the future of the store, seemed to casually disappear. Throughout the piece there is a looming unspoken tension that is the result of a blow out between Kim and his son Jung. We only get to see Jung for two scenes the latter of which things quickly resolve between father and son and the question of the store’s future is tied up in a neat bow when Mr. Kim decides to leave the store to his son. We don’t see things resolve between the two of them, but perhaps it’s an unspoken “let what’s past stay in the past, all is forgiven and forgotten, let’s focus on what’s important and mend our relationship, my children are my legacy”.

The show ends rather abruptly and I could have done with a little bit more clarity on all the resolutions but all in all it is a lovely night at the theatre. It’s a show that tells an honest story that is relatable to everyone on many different levels. It’s no wonder that the show has done so well, touring across the country and soon to be made into an original television series. It’s a play that represents our city that is filled with different stories and it’s exciting to see Toronto theatre utilizing the wealth of stories it has to offer and sharing them.